Turkey has transplanted its military medical system into civilian life in the Health Ministry. 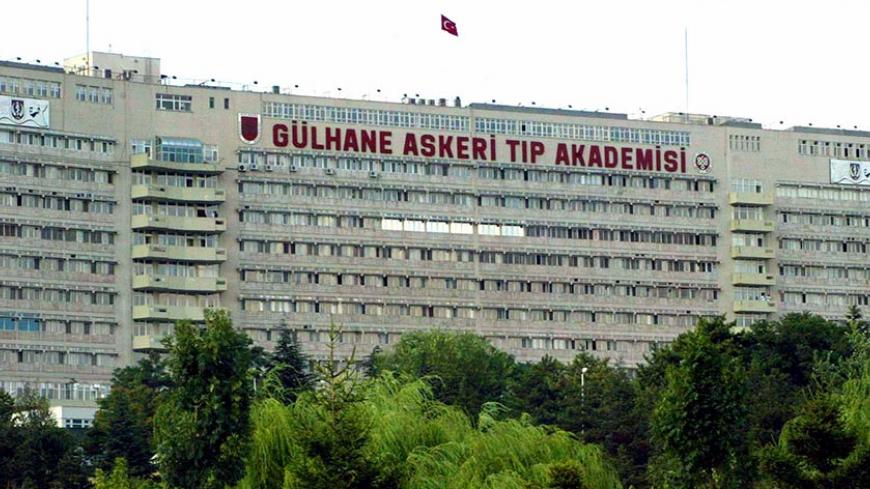 The Gulhane Military Medical Academy and Hospital is seen in Ankara, Turkey, Aug. 1, 2003. Jurisdiction of the military hospital has recently been handed over to the civilian Ministry of Health. - REUTERS/Stringer/File Photo

The Turkish government is following through on its radical decision to totally dismantle the military medical network of about 900 doctors and more than 4,000 military nurses and paramedical personnel.

Under the state-of-emergency decree issued July 31, two weeks after an attempted coup, the 125-year-old Gulhane Military Medical Academy (GATA) in Ankara and 33 other military hospitals in different parts of Turkey were transferred to the jurisdiction of the civilian Ministry of Health. The medical needs of the Turkish Armed Forces (TSK) will be handled by the civilian medical system.

The transfer inevitably created a battlefront of discord between the military high command and civilian politicians, generating angry debates in the public sphere and also between civilian and military elites.

The debate in the public sphere was triggered by reports that a specialist sergeant who had suffered serious burns Sept. 6 had died. The sergeant, part of the Euphrates Shield military intervention against the Islamic State (IS) in Syria, was said to have died because he was not evacuated from the Gaziantep Public Hospital to GATA's highly specialized burn unit. Reports claiming the sergeant had died because of incompetence in the civilian medical system spread like wildfire on social media. The reports added that the civilian system has been experiencing serious problems in prioritizing TSK casualties from clashes with the Kurdistan Workers Party and IS, thus hurting TSK morale and motivation.

According to Minister of Health Recep Akdag, such reports are malicious fabrications. The military medical system was abolished, he said, for three reasons. First was the necessity of cleansing the system of Gulenists, whom Ankara blames for the attempted coup. Second is an unproductive system, and third is low occupancy rates in military hospitals despite enormous investments made in them.

Military elites, especially retired officers employed as professors, and the chief of general staff are also reacting strongly to the closing. Ali Sehirlioglu, a professor and retired general from GATA, believes the transfer will wipe out the TSK’s phenomenal accumulation of military experience and academic knowledge of military medical services, combat surgery and psychiatry.

Sehirlioglu said GATA, based in Ankara, constitutes the uppermost level of the TSK medical system and is an absolute necessity. He said the new system means there will be no new doctors specializing in military medicine and all the amassed experience will be squandered. Sehirlioglu said every modern army of the world and all NATO countries have military medical systems and hospitals and what is happening in Turkey is extremely worrisome.

Retired professor Maj. Gen. Erol Ugur also noted that military hospitals give priority to relatives of those killed in the line of duty, veterans and serving and retired soldiers. With the new system, these priorities could vanish.

Military historian Sefa Ozkaya reminded Al-Monitor of the symbolic importance of the military medical system in Turkish military history. Ozkaya believes the introduction of that system in the Ottoman Empire in the 1840s spearheaded the entry of modern medicine into the country.

The civilian government, however, appears to have turned a deaf ear to all these points. The plan is to hire civilian doctors needed by the TSK on contract. Akdag said the Health Ministry plans to set up combat surgery, combat psychology and combat orthopedics specialties in medical schools. “Many countries have a separate military medical system. But these countries don’t have the extensive and developed civilian medical system that Turkey does. We have full confidence in our civilian medical system,” he added.

Most people are not aware of the current TSK medical system, which comprises four levels. At the first level are field units where noncommissioned paramedical personnel are responsible for first aid and casualty evacuation. These personnel used to be trained at GATA; now they will have to be trained at civilian universities. At the second level are brigade-division infirmaries staffed by general practitioner military doctors. These doctors, in addition to handling preventive and curative services, are also tasked with counseling, hygienic control of food and even family planning. Now who will provide these services?

The third level is 33 military hospitals. In addition to providing specialized medical services, including surgeries, they also perform medical examinations of military personnel signing up for demanding duties, such as pilots and commandos. The fourth level is the Ankara-based GATA and its associated medical institutes such as the Orthopedic Rehabilitation Center. At this level, sophisticated medical examinations are conducted; this is the final step for personnel who want to be pilots and special forces personnel.

It wasn’t at all surprising that the Gulen movement wanted to have a major influence at this TSK medical level. By allegedly manipulating medical examination results, they were able to place personnel they favored into critical posts, while eliminating others.

According to a doctor who, until a month ago, was a lieutenant colonel but now is a civilian doctor for the Ministry of Health, it is true that third-level military hospitals are unproductive and wasteful institutions and the GATA at Ankara is both unproductive and out of date.

“The military medical system has needed reforms for more than a decade. The TSK has been trying that since 2004 but couldn’t succeed because of the resistance at the fourth level and poorly selected transformation models. Discipline and supervision are weak. The land-force hospitals, especially, are obsolete and have decayed," he said. The doctor believes the Health Ministry is aware of the situation.

Another former military doctor who didn’t want to be identified insists reforms should not start at the fourth level in Ankara, but from the periphery. Today, the TSK cannot assign specialized doctors to serve in its current areas of operations. Taking on civilian specialists could improve medical services in the periphery. But the doctor wonders how the Ministry of Health will attract civilian doctors to combat specialties.

“Today, when you make good money in specialty fields such as gynecology and cardiology, why would anyone want to specialize in risky, hardship fields with less income, such as combat surgery and psychiatry?” he asked.

At the moment, there seems to be no end in sight to the debate between military-civilian elites and the public. It is becoming an important front of the growing contention over revolutionary transformation. Both parties have justified and unjustified claims. In Ankara, it is a zero-sum game in military-security reforms, because the winner takes all and the loser loses all.

In other words, an appearance of military-civilian harmony in the structural transformation can be misleading. Pretensions of cooperation and integration conceal frictions and tensions from the public.