Palestinians are concerned that as a result of the Qatar crisis, the Gulf nation might be forced to reduce its financial commitments to Palestine, especially in the Gaza Strip. 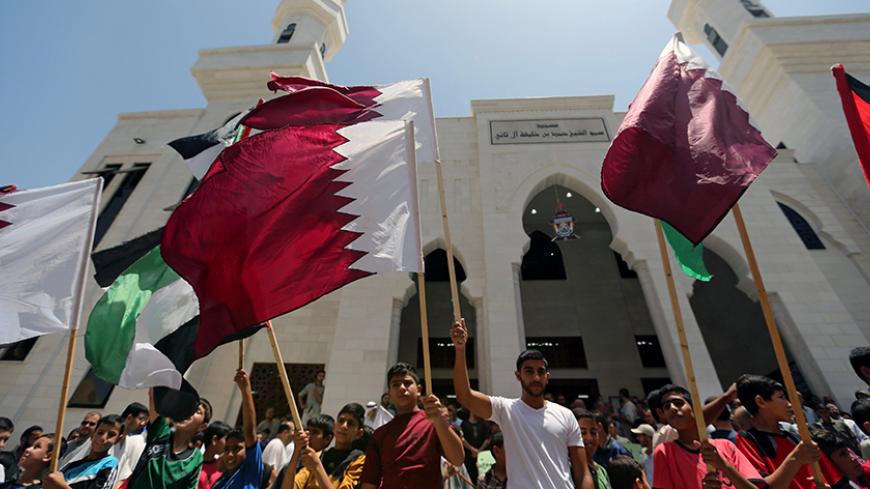 The director of Al-Quds Center for Political Studies, Oraib al-Rantawi, is one of the most followed daily columnists in the Arab world, especially when it comes to Palestinian affairs. Rantawi, a Jordanian of Palestinian origin, devoted two successive columns on June 8-9 to the effects of the ongoing Gulf drama to the demise of the Palestinian Islamic movement Hamas.

Rantawi made a direct connection in his June 8 column between the escalation against Qatar and the May 20 Arab summit with US President Donald Trump in Riyadh. “Trump lumped Hamas with the Islamic State, Jabhat al-Nusra and Hezbollah in his terrorism list, while attending Arab Islamic leaders were quiet.”

The well-read analyst said that what is strange is that the four Arab countries that decided to boycott Qatar — namely Saudi Arabia, the United Arab Emirates (UAE), Bahrain and Egypt — have not listed Hamas on their terror blacklist. “Egypt welcomed on the same day a delegation headed by Yahya Sinwar, the hawkish Gaza Hamas leader, and Saudi Arabia had in 2015 welcomed Khaled Meshaal, the head of Hamas’ political bureau, while the UAE’s favorite exiled Palestinian leader, Mohammed Dahlan, openly proclaims his good relationship with Hamas.”

Regardless of their positions toward Hamas, there is no doubt that in the post-Trump visit to Saudi Arabia, a new order has been established.

Omar Kullab, a Jordanian political analyst of Gaza origin, told Al-Monitor that the visit to Egypt by the Hamas delegation was not a pleasant one. “Sinwar and his group were summoned to Cairo and were told point-blank that they have to quickly end their rule and hand over the reins of power in the Gaza Strip to the Ramallah-based authority.”

Rantawi warned Palestinian President Mahmoud Abbas and the Ramallah-based leadership, however, not to get too excited about the developments between Hamas and the Arab world. “I worry that Fatah in Ramallah would welcome these changes and feel good about them. It might be Hamas today, but it could be Abbas tomorrow,” he warned.

Rantawi’s concerns are apparently correct. A PLO source in Ramallah told Al-Monitor on condition of anonymity that the Palestinian leadership is very happy with the latest developments. “They are enjoying seeing Hamas go down, especially because of what Hamas did to them,” he said in reference to Hamas taking over Gaza by force from the Palestinian Authority in 2007. The source insists that without Qatar, Hamas would have “collapsed” a long time ago.

Jihad Abu Fallah, a senior producer with the UK-based, pro-Hamas Hiwar TV, also believes that the Qatar crisis will have a negative effect on Hamas. Speaking to Al-Monitor, Abu Fallah said, “Many of Hamas’ leaders have already left Doha, and the newly elected head of the political bureau, Ismail Haniyeh, has retracted his decision to move from Gaza to Doha.”

Abu Fallah believes that the PLO will also suffer as a result of this crisis. “Funding to Palestine will be reduced, and in the frenzy to cozy up to the United States the Gulf countries are going to race to normalize relations with Israel on the account of the Palestinian cause.”

In his June 9 column, Rantawi called on Hamas to learn from the Palestinian exile experience in the past decades and reminded them that when the PLO was based in Tunis in the 1980s, they were forced to give in to international pressures in order to stay relevant and ensure that the world did not negotiate directly with the leadership in the occupied territories. The analyst was referring to pressure placed on the PLO to moderate its position after it took residency in Tunis.

Rantawi believes that there are very few choices left for Hamas, which will not be able to find a safe haven even in Sudan. “If Hamas wants to get out of the bottleneck that is squeezing it, then it must find a way to return to the political umbrella of the PLO and give up its unilateral rule in the Gaza Strip.”

The extreme pressure that has been piled on the Gulf state of Qatar is destined to be resolved sooner or later. But the big question will be at what price. How long will the small state of Qatar hold out its claims of sovereignty and independent foreign policy, and what are the compromises and groups that will be sacrificed in order to bring this crisis to an end?

While the Ramallah-based leadership is not currently under any pressure to take any steps against Qatar — such as ending diplomatic relationships — it will no doubt be watching closely what is happening in the hope to keep its head low as Palestinians and Arabs await the end of this storm with the least costs.