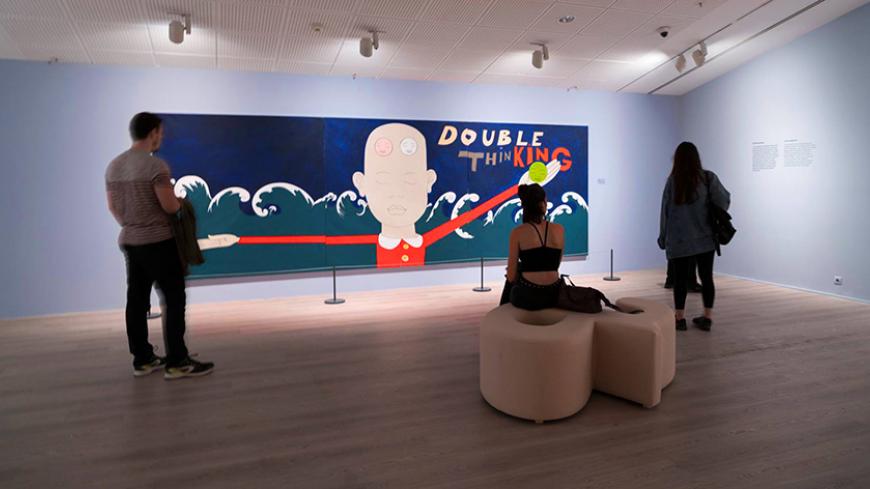 Six neon figures that light up a single wall at Istanbul’s Pera Museum make no sense until you read the title, “A Few Hours After the Revolution.” Then you realize that the neon letters duplicate the Turkish word DEVRIM (Revolution) in capital letters after the letters have been altered by anti-revolutionaries or police. In Turkey, leftists often write "devrim" on walls only to have the graffiti quickly made incomprehensible by others.

For someone who has lived in Turkey during the left-right clashes on the streets before the 1980 military coup and, to a lesser degree, during the 2013 Gezi Park revolt in Istanbul, this distorted version of “devrim” is almost as familiar as its correct writing.

“This work is inspired by a mutant language, where leftists scribble the word revolution on the walls, only to have the letters deformed by the rightists,” Asli Cavusoglu, one of Turkey’s best-known contemporary artists, told Al-Monitor. “It is not censorship in the full sense of the word. It is, rather, a way to intervene in the way this word is read. It is the creation of new letters, a new language.”

Cavusoglu’s neon work is part of Pera Museum’s summer exhibition “Doublethink: Double vision” that brings together a group of international artists around the Orwellian concept of “doublethink.” The term, one of the pillars of George Orwell’s dystopian novel "1984," was defined by the writer as a tool of the state to control the way the individual thought. It referred to the ability to hold two contradictory ideas at the same time and to forget any fact that became inconvenient.

In the last five years, Orwell’s "1984" became a buzzword to explain the new world of politics, with its totalitarian tone and doctored truths. "1984" has been used to refer to Donald Trump’s America, Vladimir Putin’s Russia and Recep Tayyip Erdogan’s Turkey. Orwell also made its strong comeback to the culture scene as "1984" topped the book lists in Russia in 2015 and in the United States in 2017, and tickets for the play "1984" sold like hotcakes in Bertonov Hall at the Habima Theater in Tel Aviv, Israel.

“Orwell was no prophet,” Alistair Hicks, the curator for the exhibition, told Al-Monitor in a written interview. “He was writing about the world of the 1940s which was dominated by totalitarian regimes. He wrote the book in 1948 and just switched the last two digits. [But] he would not recognise the use of doublethink as expressed by many of the artists in 1984.” 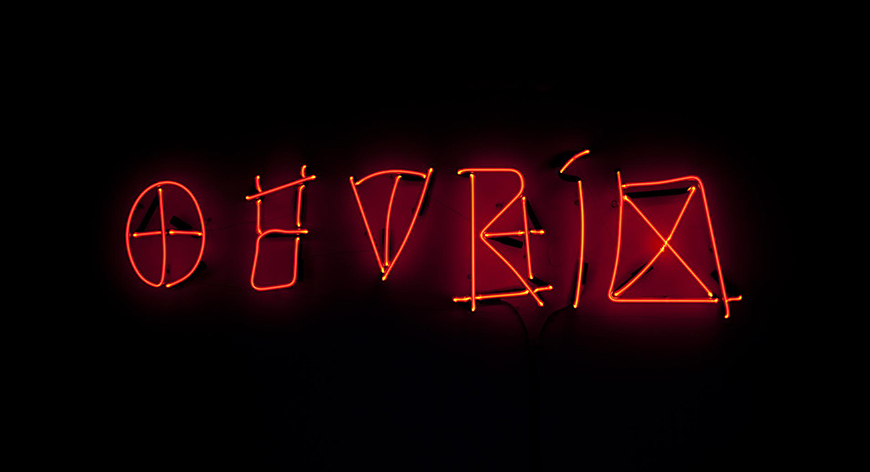 Asli Cavusoglu's neon work "A Few Hours After the Revolution" shows how letters in the word devrim (revolution) get distorted by anti-revolutionaries. Undated photo. (photo by Asli Cavusoglu's website)

The exhibition does not seek to duplicate Orwell’s concept of doublethink, where the state denies the individual the right to his own thoughts. On the contrary, Moscow conceptualists such as Pavel Pepperstein, who have inspired this exhibition, flip the concept of doublethink back to the state. For them, doublethink is a form of resistance to what the state imposes and a beginning where the artists can freely play with text and image. “You probably think of doublethink as a negative concept. We in Russia think of it as just the beginning,” Pepperstein is quoted as saying in the Pera Museum's press statement.

What Pepperstein said about doublethink being a form of resistance “has become the norm, a norm that is actually echoed around the world. Politicians everywhere are trying to exploit doublethink. And people everywhere are resisting with their own doublethinking,” Hicks told Al-Monitor.

In the spirit of doublethink/double vision, the exhibition takes up the changing relationship between text and image. In Pepperstein’s acrylic on canvas, a Zen-like figure with two faces where his brain is supposed to be stretches his arms to both sides. The title is “Double Thin King.”

Kader Attia, an Algerian artist who grew up in the suburbs of Paris, has placed three books on different pedestals and secured them in place with barbed wire. All of them are about Guantanamo and the title of the work is “Nothing Has Changed.”

Several works by Turkish artists refer to the Armenian tragedy in the way they take up doublethink — a wink to the fact that the Turkish people are reluctant to use the G-word (“Genocide”) although they know that Armenians were killed. Hera Buyuktasciyan’s sculpture “Letters From a Lost Paradise” is made of moving wooden blocks that resemble letter stamps in the Armenian alphabet. In an interview in 2015, Buyuktasciyan recalled the words of her grandmother: “If you lose your language, you lose your identity” — the very idea of “newspeak” in "1984," which sought to create another, more malleable identity in Oceania by taking the meaning out of certain words. 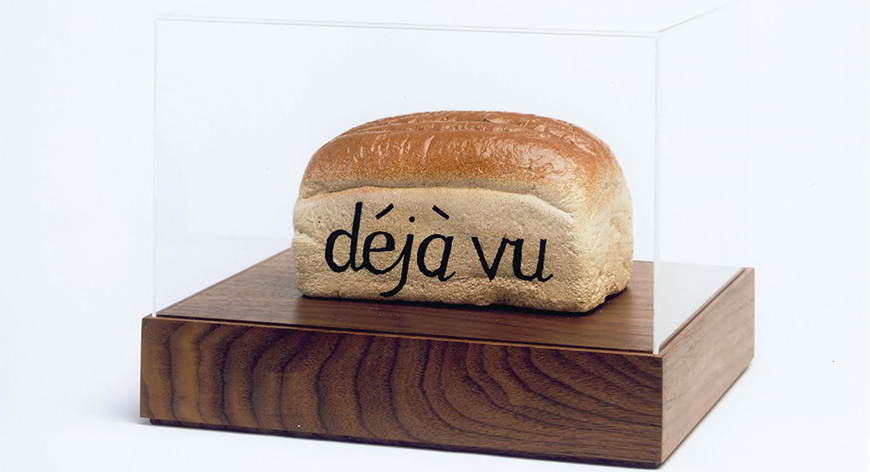 In "Rhetorical Loaf," Gavin Turk makes bread out of cement, places it on a pedestal and brands it with the hoity-toity French phrase "deja vu," undated photo. (photo by Martin Norris/Pera Museum)

For Cavusoglu, the silver lining of "1984" is the possibility of an erring totalitarian regime. Describing her recent work, which opened simultaneously with the Biennale in Venice, she told Al-Monitor that the Turkish regime’s “moment of error” came during last year’s attempted military coup. “What we saw in the July 15 attempted coup was the realization that Turkey’s institutions had become an empty shell,” she told Al-Monitor.

Her recent project in Venice wanted to outline uncertainty, unpredictability and polarization. The project, called “Future Tense,” is a newspaper where the day’s news is interpreted by fortunetellers, astrologers and clairvoyants. “Parallel to the increasing censorship and move away from being a state of law, a number of fortunetellers and astrologers emerged. Astrologers and clairvoyants were getting invited to newscasts, warning us about bombs by looking at the angles of the stars in the skies, providing us with a date for a rebellion depending on the position of Mars. The way they play with the language helps them avoid any censorship. I found 50 soothsayers of different political orientation and ethnicity and asked them what they thought would happen. They replied in their own way — and a very pluralistic paper [which Cavusoglu distributed in Venice] was published,” she said.

“The different clairvoyants have found a way to escape censorship in a totalitarian regime. I aim to show both with my made-up newspaper and with my work in the Pera Exhibition that censorship creates a new language,” Cavusoglu said, echoing Pepperstein's statement that doublethink is just a beginning, in art as in politics.