Al-Monitor visited families of Islamic State members being held in isolation in the Shahama camp, near Tikrit. They and aid workers fear what will happen to them if they are unable to rejoin communities outside the camp. 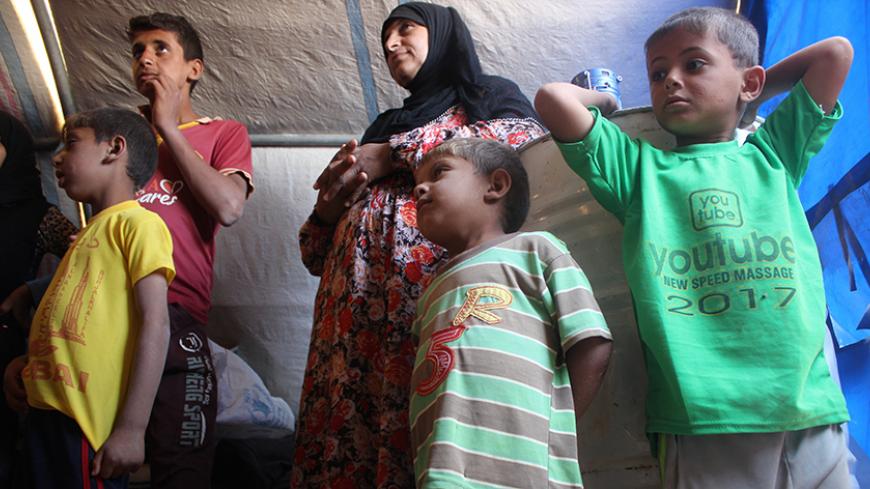 Samara Musa and some of her children are seen in the Shahama camp, close to Tikrit, Iraq, in this undated photo. - Munaf al-Saidy

An Iraqi aid worker calls them a ticking time bomb. Almost 170 families are being held in isolation in the Shahama camp, near the city of Tikrit, without access to even a phone to check on their loved ones. Al-Monitor received permission from security forces to visit the camp and spoke with some of the people living there.

“We were not with Daesh [Islamic State (IS)], and they never gave us anything,” Samara Musa said inside the almost empty tent she occupies with her nine children. Her husband was picked up by the Iraqi army because his brother was with IS. Musa said, however, “We opposed his decision.” Her brother-in-law is currently in Syria with the extremist group.

Shahama is the only official camp for the family of IS members in Iraq. While the war against IS rages, women, children and some elderly couples whose husbands, brothers, fathers and sons joined IS find themselves locked in Shahama, the Iraqi army having judged them guilty by association, without the involvement of a single court or judge. Protecting the community is the official reason given for their treatment, but the inmates appear to need protection as well, from members of the community seeking revenge.

Ebtisam Obeid Isa proclaimed her innocence, saying she had argued with her brother and later with her husband when they joined IS. “Their mothers and I, we said to them, ‘We don’t need the money. We have cars, a house. …’ Now I’ve lost it all. My daughter was in college. How can she go back after this?”

As phones are forbidden in the camp, and hardly anyone is allowed to visit out of fears that information about investigations into IS will be leaked to the terror group. Obeid does not know where her husband is, how he is doing or even if he is alive.

Ali Arkady, an Iraqi photojournalist, recently published pictures and videos of Iraqi police torturing and killing suspected IS members. On June 4, Human Rights Watch reported on the discovery of the bodies of handcuffed men who had been executed and on the informal prisons where those with possible IS links were being held in dire conditions.

Saheya Ibrahim also lives with uncertainty about the fate of her son at the hands of the military. She lives in the Shahama camp with her husband. “He tried to stop my son when he wanted to follow my brother into Daesh,” Ibrahim told Al-Monitor. “He fought him, but my son went all the same.”

Families with IS connections are also trapped in other locations. Many families who fled from Fallujah to Amiriya Fallujah are now not allowed to leave that town, which is about 60 kilometers (37 miles) from Fallujah.

Others with IS connections are living in camps for internally displaced persons from Mosul, Tikrit and Fallujah. They have gone underground, for if the truth about their family members' links with IS come out, they could be subject to the rage of Iraqis who lost loved ones to IS.

The women in Shahama, when asked, say they hate IS and were betrayed by them, as were the men who joined the group. “They gave them a false picture of the future,” sighed Obeid. “They are kaffir [infidels],” said Iman Hazem Ismael.

A frail widow, Hazem is among the inhabitants whom camp administrators believe were actively involved with IS. She lost two sons, both killed fighting against the Iraqi army. It is rumored that she conducted body searches of female civilians, looking for forbidden SIM cards. When confronted with this allegation, Hazem just shakes her head.

Earlier she said she had tried to get her sons to leave IS after she realized its true nature. She also said that she had tried to escape, but that IS members beat her and threatened to execute her three other sons, whom she tried to shield from its influence.

Hazem said the baby sleeping next to her on a blanket in the hot tent belongs to her daughter, who had married the son of an IS emir, or commander, and had fled to Syria with him. She recounted how, as an IS family, they were moved to Mosul and then, when the fighting started, were evacuated by boat to the western part of town, which was still in IS hands. They only gave themselves up after the army took over their neighborhood.

“I don’t think we can go on living with these people,” she said when asked about her future. “My eldest son has done too much to too many people. He made some big mistakes. I want to bring up my other sons in a better way, but I am so tired. I’ve lost everything.”

Most of the women complain about the hopelessness of their situation, seeing themselves more as victims than perpetrators. After all, where can they go?

The camp has a primary school, but there is nothing for the older kids. Money is a problem as well. One woman said she did not even have enough to buy a kilo of tomatoes. Hazem said that for her kids’ sake, she wants to live where no one knows her. She lamented, “I want to feel Iraqi again. Here we are just Daesh families. Nothing more.”

Al-Monitor learned from aid workers that the situation in the camp has led to prostitution and drug abuse. The women cannot cook for themselves, and they get their meals handed out to them, as they are not allowed to go out to shop.

“They do not get enough,” said Hanaa Edwar, director of the Al-Amal Association at her organization’s office in Baghdad. Al-Amal is one of the few organizations active in the camp, where its focus is on the women and children.

“They still sing Daesh songs,” Edwar said about the children. “They have been under their influence for so long. We have to find a way to help them put all that in the past.” She is worried about what might lie ahead for the camp’s inhabitants.

“You can’t punish people for something a family member has done,” Edwar said. In liberated cities such as Tikrit and Ramadi, regulations have been put in place by the mainly Shiite security apparatus to keep IS families away, unless they give up disgraced family members or kill them.

“This is not healthy,” Edwar said. “It is not possible for them to go and live elsewhere. We need people to realize that it is possible to live together. We need a program and have to encourage both sides.”

Edwar is looking for ways to get these families out of their isolation and back into communities. She said, “We need a rehabilitation program. And it would be helpful if families issued public apologies for the actions of their sons, husbands and brothers, even though they are not accountable for their actions.”

The families are a ticking time bomb and need to somehow rejoin society, Edwar said, adding, “Because if you isolate them, the result will be a new circle of hate and revenge, and a new Daesh.”