The Iranian capital was rocked today by two terrorist attacks claimed by the Islamic State. 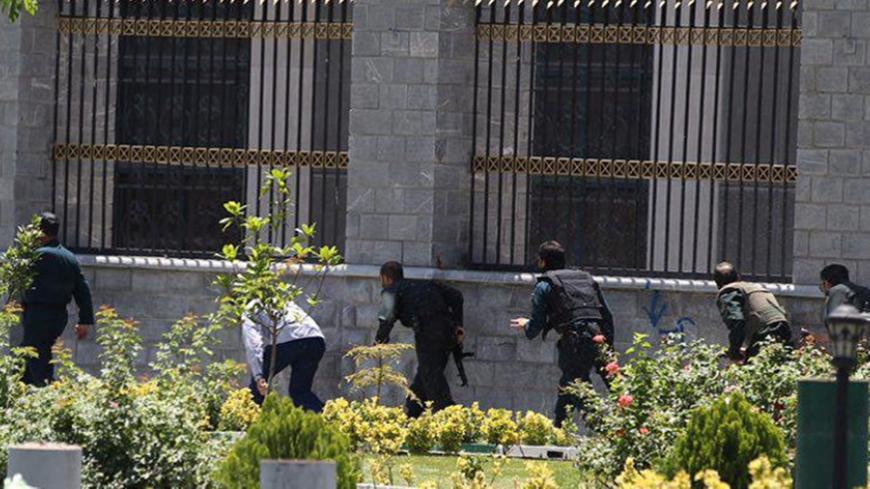 Members of Iranian security forces run during an attack on the Iranian parliament in central Tehran, Iran, June 7, 2017. - Omid Vahabzadeh/TIMA via REUTERS

Iranians experienced almost six hours of terror on June 7, as terrorists attacked two important sites in the capital of Tehran, which has not seen major bombings since the post-revolutionary violence of the 1980s.

At 10:15 a.m. local time, four terrorists disguised as women tried to enter the parliament building through the special gate for citizens who seek to meet with members of parliament. However, at the gate, the attackers started shooting at the security officers. Meanwhile, one of the parliamentarians who had just arrived at the meeting joined the clash and started shooting at the terrorists.

With the Islamic Revolutionary Guard Corps (IRGC) and anti-riot forces on site, the terrorists were still able to enter the offices of the members of parliament.

Mahmoud Sadeghi, a Reformist parliamentarian, said, “When we were in the parliament, we couldn’t hear anything [about what was happening]. We became aware of the story through text messages and cyberspace. “

He added, “Inside the parliament, everything was as usual and the session was managed by [Deputy Speaker Masoud] Pezeshkian.”

After the terrorists entered the offices of the members of parliament, they took a few people hostage and also started shooting at pedestrians from the windows. In the first minutes, it was reported that the wife and daughter of a parliamentarian had been taken hostage, but this was later denied. However, the terrorists took over the office of the parliamentarian of the town of Shahin Shahr, Hossein Ali Haji Deligani.

Deligani said that his secretary was killed, noting, “The video that Daesh [Islamic State (IS)] released from the parliament building shows my offices, and [today] two of my colleagues were martyred.”

According to the official IRNA news agency, the terrorists were killed by the security officials. However, other reports indicate that two of them at the parliament building were killed by their own explosive vests.

Minutes after the announcement of the end of the operation at the parliament, the spokesperson for the parliamentary National Security and Foreign Policy Commission stated that one of the terrorists had been captured.

At 10:40 a.m., just 25 minutes after the first attack at the parliament, two terrorists who were wearing explosive vests tried to go inside the monument of Ayatollah Ruhollah Khomeini, the founder of the Islamic Republic. According to the manager of the monument, once the attackers entered the building, they started shooting blindly, killing one person and injuring three others.

The Ministry of Intelligence announced that a third attack had been planned and these attackers had been captured before beginning their operation.

According to Ministry of Health officials, at least 12 people were killed and 42 others injured. It is unknown if more than one security officer is among the 12 fatalities.

In the IS video, which was released during the terrorist attacks, one man, who is believed to be Deligani's secretary, can be seen lying on the ground. A terrorist is seen in the video, and the calls of the other attacker can be heard: “Do you think we are leaving? We will stay by God’s permission.”

Moreover, Entekhab quoted an Arabic-language expert as saying that the terrorists in the video have the accents of people from Morocco, Tunisia or Libya.

Meanwhile, Abdollah Shahbazi, a well-known historian and researcher, published a short text saying that the terrorists weren’t related to IS. He wrote on his Telegram page, “I think that Daesh [IS], MEK [Mujahedeen-e-Khalq] and the likes are [only] for branding. We should differentiate between which group claimed responsibility [for the attacks] and which group [really] committed [the attacks].”

He added, “If the origin of the video is the Twitter account of the SITE Intelligence Group, [then] it is not valid.” Shahbazi explained that Israeli terrorism analyst Rita Katz is the director and co-founder of SITE.

Iranians were shocked by the attacks and for a few hours the situation took them back to the first decade after the 1979 Islamic Revolution, when the MEK terrorist group slayed many citizens and officials, including 72 high-ranking figures of the revolution, as well as elected President Mohammed Ali Rajai and Prime Minister Mohammad Javad Bahonar in 1981.

Ordinary people in Iran have taken to social media including Instagram and Twitter to express their rejection of terrorism and call for unity. In addition, various Iranian artists and athletes have posted images that read “Pray for Tehran,” or they are calling for unity and courage in the face of the terrorist attacks.

Meanwhile, some are attributing the events to Riyadh, as Saudi Foreign Minister Adel al-Jubeir had vowed to punish Iran minutes before the attack.

Iranian Foreign Minister Mohammad Javad Zarif, who is on an official trip to Turkey, said upon his arrival June 7, “We condemn this blind action. … Terrorism is a problem that we are facing across the Middle East region and the world. … The situation is very bad in terms of security and terrorism.”

Former IRGC Cmdr. Mohsen Rezaei wrote on his Instagram page after the attacks, “With their actions today, the terrorists will be punished severely wherever they are.”

Moreover, in reaction to criticism of some conservatives on social media who are slamming moderate President Hassan Rouhani for saying he had distanced the shadow of war from Iran through the nuclear deal, Abdollah Ramezanzadeh, a prominent Reformist, wrote on his Telegram page June 7, “Today is the day of unity against a foreign enemy, do not increase the [internal] disagreements.”

Hamid Aboutalebi, the deputy chief of staff of the presidential office for political affairs, tweeted after the attacks, "If the terrorist attacks had happened in Europe or any other place, the number of casualties would have been higher. Kudos to the power and strength of the IRGC, Basij, police and security forces of Iran."

He added, "The world should show that terrorism is condemned and not differentiate between Tehran, Paris, London, and the East or West. We should fight it seriously, more coherently and as one."

In a statement after the attacks, the IRGC said, "The world public opinion, especially that of the Iranian nation, views this terrorist attack that comes one week after a joint meeting between the president of the United States and the heads of a reactionary regional government — that has continuously supported extremists — as very meaningful and believes the claiming of responsibility for the attack by IS further indicates their hand in this brute attack.

"The IRGC has proved that it will not let any blood be lost without revenge, and just as it killed all the terrorists today with the help of the security forces, it guarantees to not hesitate in safeguarding the country’s national security and protecting the lives of its dear people."