A top foreign policy adviser to the Turkish president has publicly defended Qatar in the same breath as the Muslim Brotherhood and Hamas, while mixed signals from the US administration appear to have caught everyone off guard. 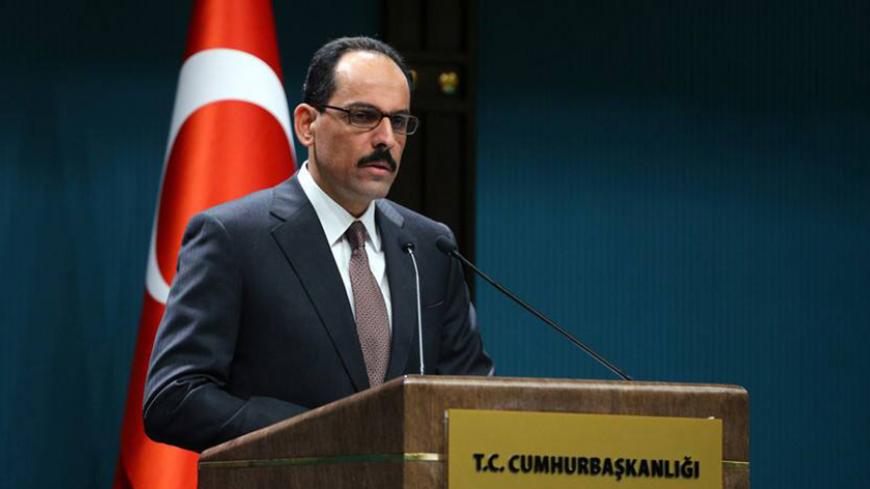 One of Turkish President Recep Tayyip Erdogan’s chief foreign policy advisers has offered a hearty defense of the Muslim Brotherhood and the Palestinian group Hamas, signaling Turkey’s continued support for militant Sunni movements and its top regional ally Qatar even as it seeks to position itself as a neutral arbiter in the ongoing Gulf crisis.

Ibrahim Kalin used his column in the pro-government daily Sabah to decry what he called the lack of concrete evidence proving that Qatar was supporting terrorism. He also called on Saudi Arabia and the United Arab Emirates to heed Qatar’s demands to lift a three-week blockade as a prerequisite for negotiations. “The measures taken against Qatar are indeed disproportionate and do not contribute to the resolution of the crisis,” he wrote. Both Turkey and Qatar refuse to class the Egypt-rooted Muslim Brotherhood and Hamas as terrorists.

Kalin, one of the few public intellectuals in Erdogan’s entourage, argued, “It should be clear by now that this recent crisis is more than about terrorism charges. It is also about how to deal with political Islamic movements, i.e., the Muslim Brotherhood and Hamas.” He might have added Erdogan’s Justice and Development Party to that list. The party, which shot to power 15 years ago, also has its roots in political Islam and sees the moves against Qatar as a threat to itself.

Ibrahim Karagul, the editor-in-chief of the pro-government Yeni Safak, perfectly captured this mindset in his daily column today. “When it is said that a new game is being staged for Syria, look immediately to Turkey. When the Qatar crisis erupts, when Iran’s ballistic missiles hit Arab soil, when Russia and America fall out in Syria, shift your gaze to Turkey,” he wrote.

Meanwhile, Turkey’s economy minister announced new plans to enhance the flow of food and other staples to the Gulf mini-state today. Nihat Zeybekci said the number of cargo planes ferrying such items from Turkey to Qatar had reached 105 but noted, “Transporting alimentary items by planes is not economically sustainable. Today our first ship will set sail for Qatar. We will continue using ships.” Overland transportation of nonperishable goods will also begin.

At a meeting of Turkish and Qatari businessmen in Doha today, the chairman of Qatar Trade Centers Company, Fairuz Muhyaddin, said Turkey had sent 450 tons of fresh food to the country since the start of the Saudi-led blockade.

In a further show of solidarity, Turkish troops arrived in Qatar to take part in joint training exercises at the Tariq bin Ziyad military base in Doha. The move came after the Turkish parliament fast-tracked legislation to allow the troops to be sent to Qatar, where Turkey is building a military base. They will help train Qatari forces.

Turkey's unequivocal backing of Qatar has prompted warnings that it is painting itself into a corner, much as it did when it launched its hapless campaign, with Qatar’s backing, to overthrow Syria’s President Bashar al-Assad.

But such mawkish predictions appeared to unravel when the State Department unexpectedly came out in support of Qatar as well. Heather Nauert, the State Department spokesperson, told reporters yesterday that the more time goes by “the more doubt is raised” about the anti-Qatar measures by Saudi Arabia and its allies. “At this point, we are left with one simple question: Were the actions really about their concerns regarding Qatar’s alleged support for terrorism, or were they about the long-simmering grievances between and among GCC countries?”

The remarks fly in the face of earlier tweets from President Donald Trump, who appeared to cheer on the Saudis. “During my recent trip to the Middle East I stated that there can no longer be funding of Radical Ideology. Leaders pointed to Qatar — look!” he wrote. Many, including Turkey, took his words as unqualified backing for Saudi Arabia, which may help explain why Erdogan was uncharacteristically slow in coming to Qatar’s defense. He broke his silence two days after the blockade was announced and even then his comments were mild.

The mixed signals from the administration appear to have caught everyone off guard, including some US officials. “The comments that were approved and what Nauert read out were rather different,” an official speaking on condition of strict anonymity told Al-Monitor.