Beirut Pride week is held in Lebanon to raise awareness about the rights of the LGBTQ community. 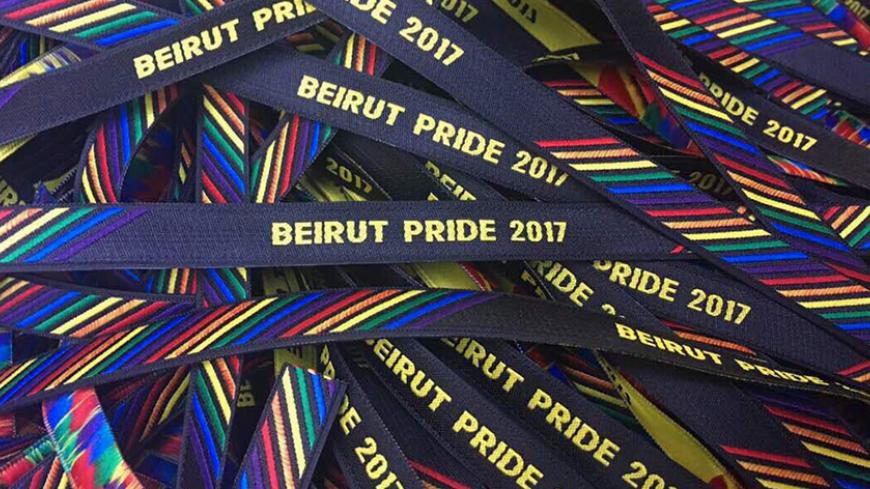 Bracelets being handed out as part of the Beirut Pride event are seen in this photo uploaded May 12, 2017. - Facebook/BeirutPride

Despite threats, Lebanon's LGBTQ+ community is moving forward with Beirut Pride, an initiative celebrating tolerance and respect. A bevy of events, including exhibitions, talks, concerts, parties, performances and screenings, are emphasizing love and inclusion to defeat attempts by an Islamist party to cancel the occasion.

Hadi Damien began planning Beirut Pride last summer as a special week to coincide with the International Day Against Homophobia, Transphobia and Biphobia (IDAHOT) on May 17. From May 14-21, multiple events are being held in Beirut's cultural centers, bars, offices and outdoor venues. A statement posted on the Beirut Pride website says, "Beirut Pride is a happy, friendly, constructive platform that invites people to express themselves, in an attempt to contribute to our liberation from the destructive hate that poisons our country and forces many fellow citizens out toward other countries that guarantee their basic rights."

The message apparently wasn't appreciated by some members of the League of Muslim Scholars in Lebanon, which used social media to call for the first event of the week to be canceled. They urged other religious groups and the government to take action. The May 14 event, organized by the nongovernmental organization Proud Lebanon, was supposed to be a full day of talk, music and performances at Hotel Monroe in downtown Beirut, to celebrate IDAHOT a few days in advance.

Although that event wasn't officially a part of Beirut Pride week, its goal was the same: to promote respect and tolerance toward the LGBTQ+ community. "Our day was canceled because the hotel received threats and the Islamist organization put pressure on the management, which became afraid for the security," Causette Maalouf, Proud Lebanon's advocacy officer, explained to Al-Monitor.

"We had a signed contract and everything, but the hotel called us at the last minute to cancel the event. Instead, we held a press conference calling our supporters, as well as every person fighting for human rights, to participate in Beirut Pride week. [Canceling the event was] a pure act of homophobia, but luckily we are still in a country where we have the freedom to express our rights. We will keep working and continue our fight; a canceled event will not change that," she said.

It's the 12th year for Lebanon's IDAHOT celebrations. Helem, the first nonprofit organization working to improve the legal and social status of LGBTQ people in Lebanon, was founded in 2004. "However, this year, more actors and [nongovernmental organizations, or NGOs] are involved, which shows the growing support for the LGBT community,” Georges Azzi, executive director of the Arab Foundation for Freedoms and Equality (AFE), an NGO that has hosted events in Lebanon such as workshops and open houses, told Al-Monitor.

"The [Muslim scholars] actually try to shut down any LGBT event," Azzi said. "Back in 2005, they asked to shut Helem down. But they never succeeded. It is important to keep in mind that it was the hotel hosting the event that canceled it and not the authorities, so I don't think this is significant. I actually think we have come a long way in terms of LGBT perception, and with the visibility we are getting now, I think we are on the right path."

The cancellation actually brought even more visibility to the initiative than expected. For example, about 400 people attended the storytelling night in Station Beirut, a cultural venue, when the organizers were expecting only 150. "In the end, we did things properly, got all the authorizations from the authorities and our events are safe," Damien told Al-Monitor.

He added, "We are Lebanese citizens, after all, and as such [our gatherings] are protected by the Internal Security Forces, like any other event. This week has actually been made possible by the work, for more than a decade, of citizens, groups, associations and lawyers who advocated for us."

The group's goal isn't to protest or for members to be seen as victims, but instead to celebrate positive change. "We are simply saying that because you think someone is different than you, it is not OK to harass, bully, attack or discriminate against this person," he explained. "We are not asking for consent or acceptance, but we are against aggressiveness and the stereotypes shared by Lebanese media. They display stereotyped images of homosexuals as people you can mock, who do drugs, are prostitutes or abused — so at the end of the day people are misinformed. We are here to make what being LGBTQ+ means commonplace."

Damien also expressed his admiration of younger Lebanese who live "without taboo or fear, with a real pride, who expressed so much during this week." He noted that "a young girl from Tripoli chose to come out on Twitter after hearing about the initiative."

"People just want to lead their lives without hiding, being scared or ashamed, and at the end of the day, things are going in the right direction," he added.

Beirut Pride is now considered by activists as the first organized pride week of Lebanon, which is a positive sign for the LGBTQ community. Some small legal steps have already been taken, and even some advertisements tackle the issue, such as a video made by the Lebanese restaurant chain Crepaway showing two women embracing in front of the sea.