What Abbas hopes to achieve from Trump's Palestine visit

Ahead of President Donald Trump’s visit to the West Bank, the Palestinian leadership is satisfied with its choice of strategy, consisting of opening communication channels with the new Trump administration and avoiding tensions on the ground. 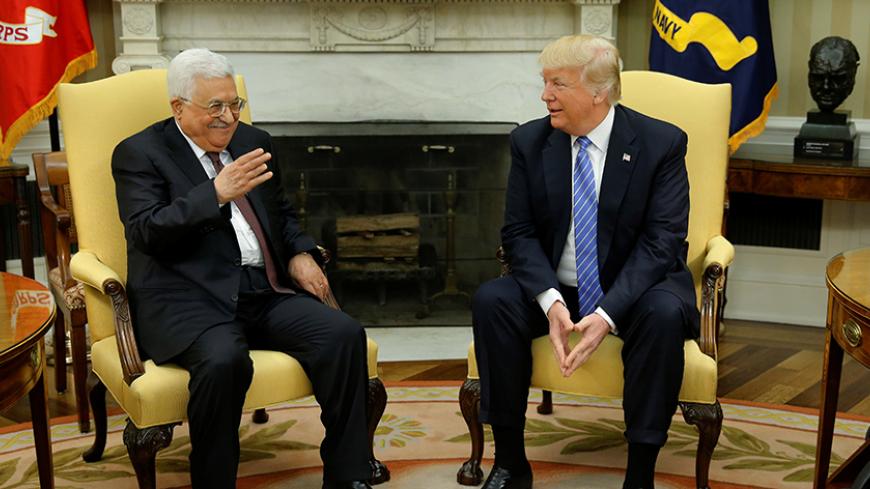 Palestinian President Mahmoud Abbas delivers a statement accompanied by US President Donald Trump during a visit to the White House in Washington, May 3, 2017. - REUTERS/Carlos Barria

Trump is coming to Palestine. Ever since the announcement of the American president’s upcoming visit to the region May 20-23, top Palestinian Authority (PA) officials keep repeating these few words to themselves in disbelief. Their wonderment is not simply at another visit by a US president to PA territory, but also at the diplomatic victory achieved by their proper preparations, admirable diplomatic sophistication and, especially, hard work.

While the Israeli right wing was celebrating Donald Trump’s election as heralding the arrival of the Messiah and starting to draw up plans for annexing most of the Israeli-occupied West Bank and accelerating construction in the Israeli settlements there, the Palestinians were busy brainstorming. They sought to decipher the Trump code and recorded achievements far exceeding expectations.

As reported here several days following the Nov. 8 US presidential elections, right after Trump was elected, the Palestinian leadership set up a steering committee of scholars of the United States, aided by experts on US governance, academics and politicians. The role of this team was to advise Palestinian President Mahmoud Abbas on how to establish channels of communication with a White House perceived as the most pro-Israel, anti-Muslim ever.

Palestinian diplomacy has since recorded several impressive achievements: blocking the initiative to move the US Embassy in Israel from Tel Aviv to Jerusalem, despite Trump’s campaign pledge; an administration warning to Israel regarding continued construction in the settlements; and Trump’s hosting of Abbas at the White House on May 3. Now comes the decisive stage of the Palestinian relationship with the Trump administration. The goal is to persuade the Americans that the Palestinian leadership, like Israel, is a strategic defense asset in the Middle East. What appeared in the initial period after the US elections as a pipe dream is now seemingly a realistic and feasible scenario.

“Team Trump” has been working day and night to prepare for the president’s May 23 visit to the West Bank town of Bethlehem. It is counting on the president’s first visit to the Church of the Nativity — an event that will be aired live throughout the world — to prove internationally that the site sacred to Christians is in good hands. And right after that, the Palestinians will get down to brass tacks. Palestinian aides have prepared a presentation designed to show the president and his entourage how the PA rehabilitated the areas under its control since the end of the second intifada against Israel in 2005. The presentation aims to prove that the PA has built efficient security forces with American help, strong political mechanisms and institutions that enforce law and order as in any civilized country in the world. This was all achieved, they would argue, thanks to Abbas’ determination and even before a Palestinian state has been established.

A Palestinian source who is kept abreast of the preparations for the Trump visit told Al-Monitor that the PA aspires to convince the American administration and the president especially that it is a vital component of the Arab defense triangle alongside Jordan and Egypt. It is with this triangle that all defense and diplomacy-related matters in the region have to be coordinated, in return for which it will provide the Americans with strong support against radical Islam, which Trump perceives as a threat to the security of American citizens.

The Palestinians will explain to Trump that they pay a high price for this position. Often, they will argue, Palestinian police officers are accused of serving the Israeli occupation and betraying the national cause of the Palestinian public. The Ramallah leadership hopes for Trump to understand that under Abbas, the PA maintains public order in its territory, and as such is also vital to the security of its neighbor, Israel. This understanding would offer the Palestinians a good chance of getting their way and being considered part of the Jordanian-Egyptian alliance.

Since assuming office, Trump has been heeding the advice of Egyptian President Abdel Fattah al-Sisi and Jordan’s King Abdullah II on the Palestinian issue. The two implored him to avoid shaking up the fabric of the complex relations between Israel and the Palestinians, which could affect the entire Middle East. Trump heard them out and took their advice; the Palestinians would like to achieve comparable status in Trump’s eyes, as well as recognition of their role in the fight against the Islamic State. They think such a scenario is possible. The price will be continued, effective security cooperation with Israel.