On election day, Iranians divided over future of country

Polls close after Iranians turn out in large numbers to cast their votes in the 2017 presidential election. 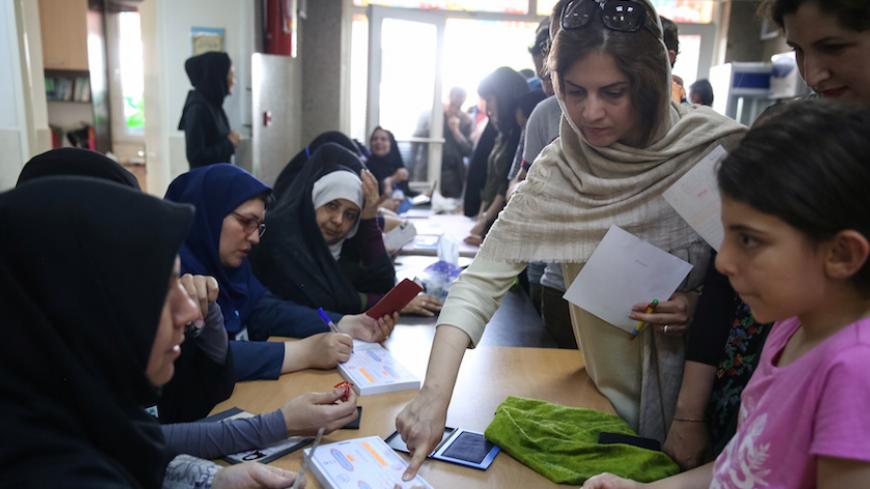 Voters cast their ballots during the presidential election in a Jewish and Christian district in the center of Tehran, Iran, May 19, 2017. - REUTERS

TEHRAN, Iran — It was 6 a.m. when we reached the leader of Iran’s residence in central Tehran. It was my first visit to the vast compound that brings together all the state institutions under the supreme leader's direct supervision. At 8 a.m. sharp, Ayatollah Ali Khamenei entered the hall where he is supposed to cast his votes — one for the presidential election and another for the local and municipal elections. Khamenei greeted the electoral committee first. He headed toward the ballots, smiled at the journalists — mostly Iranian and a few foreigners — then closed his eyes and murmured some words, apparently a prayer, then cast his votes.

Nobody knows Khamenei’s electoral choices. “I believe that the presidential election is extremely important,” Khamenei told reporters. “The destiny of the country is in the hands of the people who choose the head of the executive branch. They should be aware of the significance of this,” he added.

On the way from Beit Rahbari, the leader’s residence, to northern Tehran, several electoral centers had long lines. Some voters had their children with them despite the fact that these children can’t vote. “It’s just about making them get used to the concept,” said a woman Al-Monitor met at a polling station in Aqdasieh. She was standing on one side of the center with her daughter; on the other side, her husband accompanied their second daughter. “We are here to say yes to President [Hassan Rouhani] — and because I want him to win and the other candidate to lose, I and all these people came here.” Her comments tormented one of the voters by her side. “You can’t say all of us; I’m not here to vote for your candidate,” one of the ladies said firmly. “I see that Rouhani poses a threat to the revolution; he’s not the president that we want to lead us. For my children and the children of my fellow Iranians, we have to make the change," the other lady added.

The debate we witnessed between the two women isn’t too far removed from the debates that already took place between the Iranian candidates and their supporters everywhere in Iran during one month of electoral campaigns. This shows that the ballot on May 19 isn’t only for the presidency, but for the future of Iran, as both sides believe that winning this time gives them the chance to set the country’s agenda for the coming years.

“Rouhani’s vow to discuss non-nuclear sanctions means he’s offering to go further in giving up Iran’s power. Does he want to discuss our ballistic program with Trump?” a source close to hard-liner and presidential candidate Ebrahim Raisi told Al-Monitor. The source revealed that his battle is today between Iran’s revolutionary line and those who believe that the revolution is a liability. A source close to Rouhani with whom Al-Monitor spoke accused the Principlists of making up stories just to come to power. “They want to hijack our government’s achievements — these achievements that are for the good of the revolution that we will continue to honor,” the source noted.

Supporters of both candidates, and mainly supporters of both political trends, didn’t take chances on election day. At Husseiniyeh Ershad, people were lining up as never before; voters encircled the large complex from three sides. Of all ages and from different areas, they came to cast their votes. Until very late hours, the people showed no readiness to leave without doing what they came to do. Two Bakhtiari couples came wearing their traditional clothes as they headed to the polling station, while a group of young men and women clapped every time someone voted successfully. Inside the polling station, people used each other’s backs to write their choices, while others posed for selfies beside celebrities who filled the historical site. Ershad is known to be the gathering point for Reformists whenever there’s an election.

To the east of Tehran, at Al-Nabi Mosque, the scene reflected the identity of most of the voters. This is where former President Mahmoud Ahmadinejad used to vote, yet this time he decided not to vote there. Principlists backing Raisi filled the place, and it was clear that they too had their own celebratory way of participating in the election. As the mosque filled, a bride and a groom entered to vote. Many Principlist political and cultural faces filled the place — it looked like a very conservative carnival. Lines started to form early in the morning, and when Al-Monitor's correspondent left the mosque, people were still waiting their turn to cast votes.

As the day came to a close, claims by Raisi’s campaign that there was foul play caused some concern. Al-Monitor spoke to another source close to Raisi to understand the situation. He claimed that there were not enough paper ballots at polling stations where Raisi voters are a majority, and that people had to wait outside the polling stations without being offered solutions by the Interior Ministry.