As in the 2013 presidential polls, foreign policy has increasingly become a key component of Iran's presidential elections. 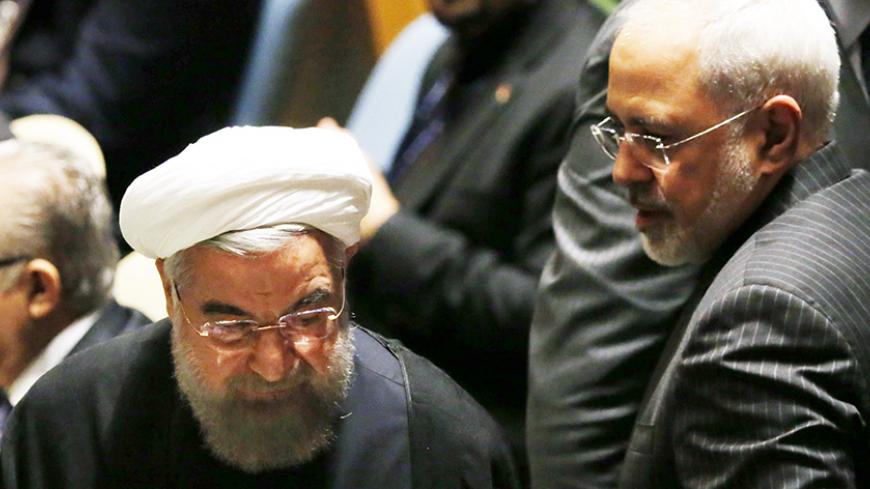 During the 2013 election, Rouhani argued that many difficulties were rooted in the country’s foreign policy, declaring that it’s time for foreign policy to serve Iran’s economy. He also said in yet another highly symbolic sentence that the spinning of uranium enrichment centrifuges is valuable once the economy’s wheels also spin. Therefore, his foreign policy agenda focused on resolving both the nuclear issue and easing tensions with Iran’s Arab neighbors. Nonetheless, resolving the nuclear issue through engagement with six world powers came first, paying off with the signing of the 2015 Joint Comprehensive Plan of Action (JCPOA).

The JCPOA was a result of both parties lowering their maximalist goals. For instance, Iran shipped out most of its low-enriched uranium, halted enrichment at its Fordow facility and accepted a robust verification mechanism. In return, Iran’s nuclear file was brought out of the UN Security Council, nuclear-related sanctions were lifted and Iran was allowed to rejoin the global economy — all, as Iranian Foreign Minister Mohammad Javad Zarif has repeatedly stated, within a discursive framework in which the JCPOA was portrayed as a “win-win."

Rouhani’s critics, however, saw it as surrendering Iran’s inalienable rights. In their view, the six world powers did not accept any serious commitments in return for major sacrifices on the part of Iran. This point is expected to come up during the campaigning and especially the upcoming presidential debate on foreign policy, which will be broadcast live on Iranian state television May 12.

Indeed, Rouhani’s Achilles’ heel is the practical outcome of the nuclear deal. To rally his supporters during the negotiations leading up the accord, he elevated public expectations of its impact. Those very expectations, which helped push for the deal, have over the past two years gradually been turned into a weapon against Rouhani in the hands of his opponents. Facing these criticisms, Rouhani has argued that the JCPOA “freed us and broke the enclosure of Iran.” He is right. The JCPOA has ended many restrictions. Nevertheless, economic opportunities stemming from the JCPOA have remained below expectations. This will increasingly come up as election day nears — and Rouhani will have to answer. In other words, for Rouhani, the reality versus expectations dichotomy of the economic impact of the nuclear deal is in essence a self-made challenge.

Rouhani’s critics quote Zarif, who served as Iran’s chief nuclear negotiator, as saying that Trump is not committed to the JCPOA’s spirit and letter — not to endorse Zarif, but to criticize Rouhani’s policy toward the United States. In this equation, Trump has in effect created a sort of ambiguity that acts to impede the reintegration of Iran into the global economy — an ambiguity that will arise in the presidential debate on foreign policy. Rouhani’s main counterargument is that regardless of the ambiguity, Iran’s reintegration into the international economy, however gradual and slow, is continuing.

As such, the JCPOA has given rise to criticism against Rouhani: that his trust in the United States was a huge mistake, that the nuclear deal was thus based on strategic miscalculations and the practical outcome of the JCPOA is not what was expected. The question remains of whether deal critics can translate their arguments into votes and if Rouhani’s arguments can defuse their rationale.

Rouhani’s regional policy is also coming under the spotlight, with the main criticism leveled at his administration’s focus on internationalism rather than regionalism. This is rooted in two old approaches in Iran’s foreign policy. According to the first approach, Iran needs an internationalist policy to overcome regional challenges. This argument is based on the assumption that Iran’s Arab neighbors are dependent on outside powers, and as such, will fall in line once Iran’s challenges with international actors are resolved. The second approach — namely that of Rouhani’s critics — prioritizes regionalism, assuming that all Muslim nations have to work together to counter international challenges against Muslims, such as Trump’s policies.

Rouhani’s critics charge that his prioritization of internationalism has intensified differences between Iran and Arab states. Yet Iranian-Arab tensions go beyond that dichotomy. For instance, significant differences over Iraq, Syria, Bahrain and Yemen rendered Rouhani’s initial efforts to enhance ties with Saudi Arabia ineffectual. In this equation, it should be noted that Rouhani harshly criticized those who stormed the Saudi Embassy in Tehran in January 2016, suggesting that in addition to harming Iran’s image, their actions helped Riyadh escape international pressure over its executions of dissidents, which triggered the embassy sacking in the first place. In this vein, Rouhani promptly called for the embassy attackers to be brought to justice. Rouhani’s core argument on the tensions with Saudi Arabia is based on the notion that Riyadh has not been willing to engage. The Iranian public’s wrath against Saudi Arabia, over its war on Yemen and the 2015 hajj stampede, which left hundreds of Iranian pilgrims dead, helps resonate his argument.

Despite the criticisms, there are four reasons to believe that Rouhani has the upper hand in the foreign policy debate.

First, he has a clear foreign policy vision and agenda. While this can make a clear shot out of him for his critics, it affords him a robust attitude and rhetoric during the campaigning, including the important presidential debates.

Second, a good part of the foreign policy shortcomings under Rouhani go beyond his administration’s wishes. Trump’s election and Saudi Arabia’s aggressive posture would arguably have troubled any Iranian government’s policy in the same way, and Rouhani has shown repeatedly that he can use this point effectively.

Third, criticism of the JCPOA and Rouhani’s regional policy has reached exhausting levels over the past two years, and at this point, it is far-fetched to believe that his critics will be able to come up with new and appealing arguments that the administration has not already answered.

Fourth, Rouhani’s personality and rhetorical capabilities impact voters. His key sentences, such as “foreign policy should serve the economy” and that “the JCPOA has freed us,” have been very effective in terms of impacting voter sentiment. This capability will come to his aid during campaigning, and especially the debates.