In the most crowded part of Egypt’s popular markets, in the center of Cairo, mainly clothing is sold at the "Gaza Market," but the Palestinian traders have made way for their Egyptian counterparts. 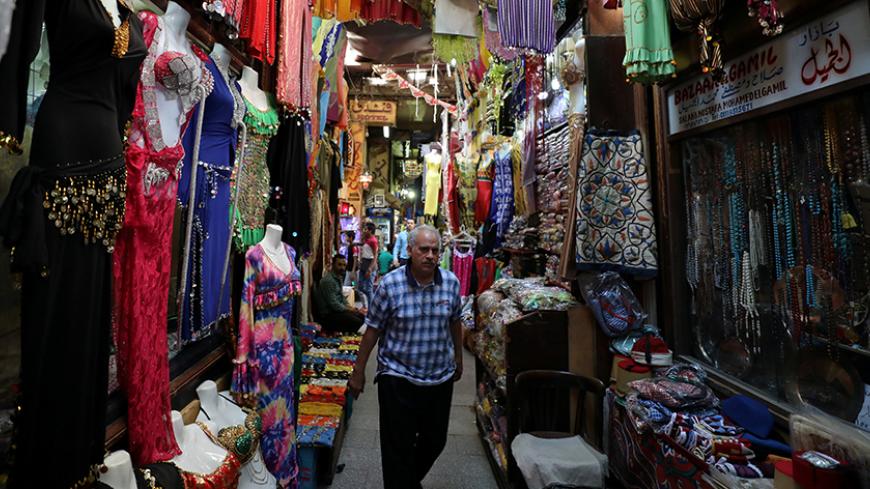 An outdoor market with clothing on display in Cairo, Egypt, May 17, 2017. - REUTERS/Mohamed Abd El Ghany

In the most crowded part of Egypt’s popular markets, in the center of Cairo, the popular “Gaza Market” specializes in selling all types of clothing. Its commercial activities started in the early 1940s, when Palestinian merchants would bring goods from the Gaza Strip to Egypt and make a handsome profit.

In 2014, the market moved from the area adjacent to el-Atba and al-Muski markets, in the Old City of Cairo, to the nearby neighborhood of al-Zawiyah al-Hamra along the commercial street of Port Said, as security measures were scarce and the market became crowded with random construction.

At the end of January, a new 65,000-square-foot market with solar panels opened nearby, with the same name, as it is an extension of the old market. However, as Palestinian products and traders are slowly disappearing from the market due to the constant closing of the Rafah crossing, relatively expensive Egyptian products have completely taken over this market.

Egyptian citizen Abd al-Karim Ali, 70, who started working as a porter in the Gaza Market in the mid-1970s, told Al-Monitor that the trade with Gaza witnessed a renaissance in the 1960s, 1970s and the early 1980s, when Palestinian merchants from the Gaza Strip transported goods such as clothing, olive oil and other Palestinian products to sell them in the market, and also transported goods from Egypt to Gaza.

Ali said, “The trade between Gaza and Egypt is what established this market. It therefore took the name 'Gaza,' and the traders in the market are only Palestinians and Egyptians. I rarely sat at home when I worked in the Gaza Market, and there were no holidays — I worked all the time and made big profits.”

Since the market's founding, mainly clothing has been sold there.

Former trader Salim Abu Yusif, 77, who currently lives in the neighborhood of al-Amal in central Khan Yunis, a city in the southern Gaza Strip, told Al-Monitor that he started selling items in the Gaza Market in 1982. At that time, he was what is called a “suitcase trader,” as he carried Palestinian-made clothing to the market in Cairo. He said, “I sold all of my goods in a relatively short time, in comparison with Egyptian merchants. Selling the Palestinian-made clothing I brought took no more than two weeks, and I made a 30% profit.”

Abu Yusif said he would buy Egyptian goods from the Gaza Market to sell in the markets of the Gaza Strip upon his return. He continued trading until 2005, when the Rafah land crossing between Gaza and Egypt began to close for long periods.

Basim Qariqa, 61, who lives in the Shujaiya neighborhood in the east of Gaza City, began trading in the Gaza Market in 1967, when he was a teenager. He would sell goods from the clothing factory that he now owns in Gaza City. He told Al-Monitor, “Though there was a lot of demand for Palestinian goods in the Gaza Market, and we were selling most of the goods that we carried with us to Egypt at high levels of profit, we stopped trading in the Gaza Market in Cairo in 2007, after the roads to Egypt became difficult [to cross] when the Rafah crossing started closing for long periods following Hamas’ victory in the 2006 legislative elections.”

Suad al-Dib, an economic researcher and the head of the Egyptian Consumer Protection Agency, told Al-Monitor that the presence of a market bearing the name “Gaza” — even though it has been relocated from the area in which it had been established — represents the symbolism of the historical and geographical connection between the Gaza Strip and Egypt. She said, “The market has a long history and everyone loved going to the Gaza Market to buy the Palestinian goods offered there. [The market] didn’t offer goods only to a certain segment of society; rich people, people with limited income and the poor shopped there as there were goods for everyone.”

She added, “Aside from the clothes in which the market specialized, we would buy traditional Palestinian embroideries of all types, in addition to the goods that Palestinians specialize in such as olive oil — to the point that I was buying all of these Palestinian-made goods. When I go to Jordan — because there are Palestinians there — or any of the regions in which Palestinian goods are sold, I quickly buy them.”

The many signs in Cairo, such as Palestinian street or shop names, show that the historical connections between Egypt and the Gaza Strip are greater than the tension that erupted following the ousting of the Muslim Brotherhood regime in mid-2013.