How this mentoring program is empowering young Arab women

The Big Sister/Little Sister guidance program launched in the Gaza Strip and Beirut helps young girls talk about social issues and empowers them to overcome harsh societal challenges in their lives. 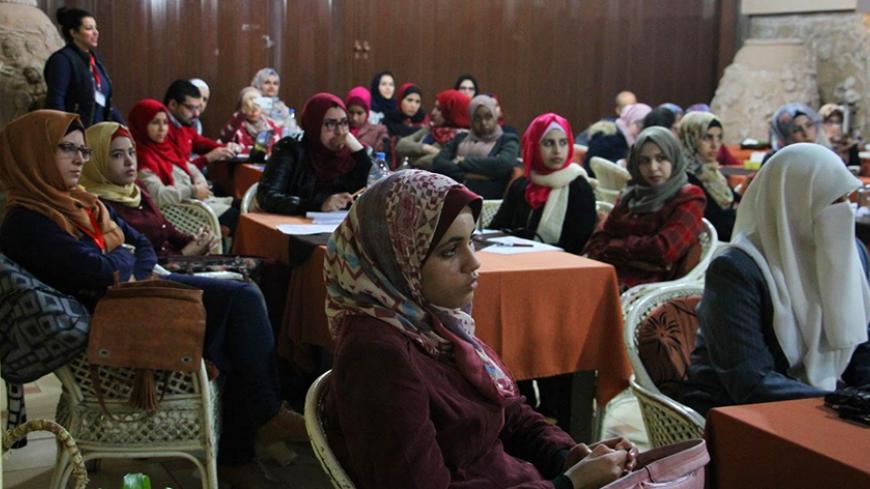 GAZA CITY, Gaza Strip — As part of the Big Sister/Little Sister program, girls 18-25 years old in the Gaza Strip and Beirut can choose a successful Arab businesswoman who lives either in an Arab or other foreign country as a big sister. They can consult with their big sisters by videoconference about the most important problems facing them in their educational or societal lives or even sensitive problems.

The Big Sister/Little Sister guidance program, which is the first of its kind in the Gaza Strip, was launched in Gaza in December 2016 and in Beirut in March this year. The program aims to guide Palestinian girls in Gaza, Palestinian refugees in Lebanon and Lebanese girls through key societal issues and empower them to confront the social challenges they encounter by connecting them with successful Arab women. These women play the role of Big Sister in video lectures specifically dedicated to them.

The program is part of the Challenge to Change platform, founded by Dina Bseisu, a Palestinian born in Bahrain. Bseisu is the platform’s CEO and the person behind the idea of the program. She spent 25 years in Switzerland, and she currently lives in the United Arab Emirates. The program aims to help women in the Middle East gain mental well-being and motivate them to be active members of society.

The girls targeted by the program live in marginalized areas and are the most vulnerable to psychological crises. In this context, the program looks to fight taboos that portray mental illness as a stigma. It also seeks to support and empower women to meet social and emotional challenges and instill the idea that they are not alone. The program consists of an interactive network of little and big sisters. The big sister is an Arab woman with 10 years or more of experience in her field of work and who has been through a lot of challenges. This sister must be capable of giving some of her time to her little sister and agree on a schedule with her while remaining committed to privacy and confidentiality.

Within the framework of the program, the big sister dedicates four hours per week to communicate with her little sister via video and talk about the problems and challenges in the Gazan community. Currently, 22 girls from the Gaza Strip and nine from Beirut are interacting with their big sisters through individual sessions.

In addition to the weekly talks, an event between little and big sisters is held every two months both in Beirut and Gaza via videoconference. Other girls are allowed to attend and benefit from these events, which brings the total number of girls attending to about 50 in Gaza and 50 in Beirut.

In this context, Bseisu told Al-Monitor, “We started working in Gaza and then in Beirut, which are considered to be conflict zones, be it at the political level or the social one given the prevailing customs and traditions. When the girls first joined the program, they were reluctant to openly express themselves.”

Over time, Bseisu noted the mutual trust and respect among the big and little sisters. This encouraged the young girls to express themselves and become involved in all issues, especially after they saw the reports issued by the big sisters that included their observations on the different cases of girls targeted in Gaza and Beirut. These reports described the progress made by the little sisters and the positive impact on their lives.

Bseisu said that the main motive behind the launch of the program was that the girls in Gaza and Beirut lack the keys that allow them to refine their personality at the personal or professional levels. When these girls meet successful Arab women who have been through difficult experiences in life and they start engaging in discussions that enrich their knowledge, develop their skills, and enhance their confidence and self-esteem, they are able to move forward in their field of work, study or personal life. Bseisu hopes that the number of little sisters will increase in the coming months.

Sondos al-Qutati, the coordinator of the program in the Gaza Strip, told Al-Monitor that the little sisters in the Gaza Strip and Beirut should be between 18 and 25 years of age. These girls should be starting university or embarking on a professional career and should be in need of guidance, empowerment, and psychological and social support to overcome the psychological problems facing them. Their cases are subsequently studied in order for little sisters to be linked with big sisters in accordance with their specialties, tendencies and interests. She said the program is still accepting applications.

Through the panel discussions, Qutati noted that most of the girls are too shy to openly talk about girl-related issues or other issues related to dealing with people, communication, time investment, time management, and their desire to acquire personal and life skills that can help them face future challenges and build a professional life that goes in line with their passions.

Palestinian Deya’ Leonard Dresner is a big sister. Dresner founded the Leonard Education Organization, an institution dedicated to providing scholarships to Palestinians from Palestine and Lebanon to study in the United States.

Other big sisters include Rola Nassar, a Syrian based in Switzerland who specializes in mentoring and guidance, and Hanane Benkhallouk, a Moroccan businesswoman in the United Arab Emirates who is the co-founder of the Big Sister/Little Sister program and the executive director of Sustain Leadership, an institution that offers programs in sustainable leadership and investment in human resources.

There is Shirin Farouni, an Egyptian based in Switzerland who runs an exhibition of fine art, and Fatima Ashour, a Palestinian lawyer and human rights activist based in the Gaza Strip.

Dana Akkad, 20, an education student at the English section of the Islamic University and one of the program’s little sisters, told Al-Monitor, “At the beginning of the program, I was full of despair and frustration as I was not fully convinced of my field. I was worried about not succeeding. I was indecisive and not so confident. But thanks to the program and the closed discussions I had with my big sister, I gradually managed to regain my self-confidence, overcome everyday challenges and strengthen my personality.”