Is Turkey bringing back its previous policy regarding Syrian President Bashar al-Assad? 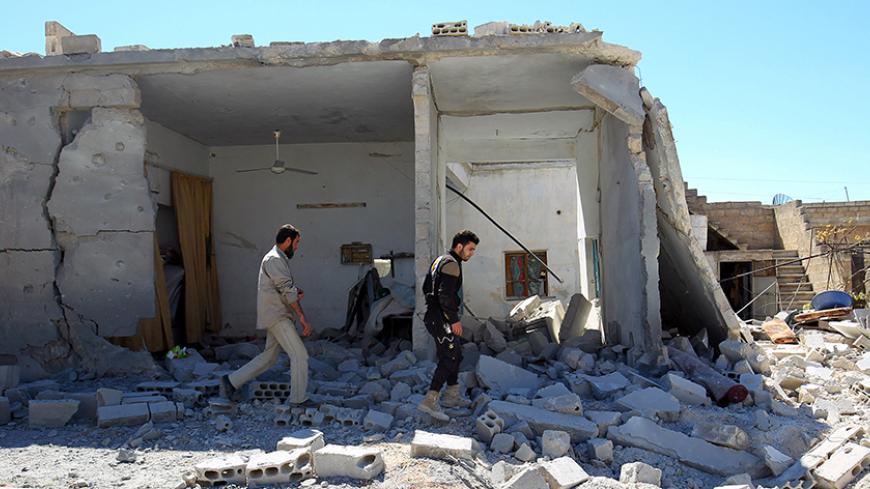 Civil defense members inspect the damage at a site hit by airstrikes April 4 in the town of Khan Sheikhoun, in rebel-held Idlib, Syria, April 5, 2017. - REUTERS/Ammar Abdullah

Much of what has happened in Syria since the April 4 chemical weapons attack that killed more than 70 civilians in the town of Khan Sheikhoun is old wine in old bottles. Though embarrassed by the episode, Russia and Iran, supporters of Syrian President Bashar al-Assad, whose regime is the suspected culprit, have warned the United States not to launch additional missile strikes like those launched April 7 against a regime-held air base. Hoping to deflect the blame from Assad, Moscow and Tehran have called for a “thorough and impartial” investigation of the Khan Sheikhoun massacre.

Meanwhile, the Assad regime has accused the opposition and its sympathizers of carrying out a “false flag” operation, the same accusation it made after the chemical attacks in Ghouta, near Damascus, in August 2013.

It may appear that the US attack against the Shayrat air base is a “game changer” in Syria’s six-year civil war, but in fact, the administration of President Donald Trump appears to have gone back to the position on Assad held by his predecessor, Barack Obama.

Although US Ambassador to the United Nations Nikki Haley said March 30 that the United States' “priority is no longer … getting Assad out,” after Khan Sheikhoun, the Trump administration is now calling regime change in Syria and Assad’s departure “inevitable.” Secretary of State Rex Tillerson, much like his predecessor, John Kerry, is expected to seek common ground with Russia when he visits Moscow on April 12.

In this context, Turkey has sensed an opportunity and revived its old arguments against the Assad regime. During a rally in the southeastern province of Hakkari on April 7, Prime Minister Binali Yildirim called for the creation of a safe zone in Syria. In a phone call with US Vice President Mike Pence on April 8, Yildirim said, “Turkey is ready to provide all kinds of support in Syria.” He added, “A no-fly zone should be considered to prevent attacks similar to the Assad regime's chemical airstrike.” As can be expected, Ankara welcomed the US missile strikes against the Assad regime and called for the Syrian president’s ouster.

Interestingly, Ankara had toned down its rhetoric against Assad last summer, to avoid jeopardizing its newfound alliance with Moscow. The Russian-Turkish rapprochement had allowed Ankara to support its Free Syrian Army allies and militarily intervene in northern Syria as part of Operation Euphrates Shield. Now that Euphrates Shield has ended, and Turkey has — at least for now — secured its basic objective of denying Syrian Kurds a contiguous autonomous zone in northern Syria, it appears to have expanded its aims.

With so many problems at home and abroad, however, can Ankara afford to confront Russia over Assad’s future? Probably not. As several news outlets have reported in the past few days, Turkey has maintained a healthy distance from the United States and Russia. On April 9, Turkish Foreign Minister Mevlut Cavusoglu told journalists that Ankara is “not picking sides between Russia and the United States.”

For the foreseeable future, that seems like a smart move for Turkey’s national interests.