The Palestinian Education Ministry announced the ratification of their first law on education to bring significant changes to the educational and academic process in the Palestinian territories. 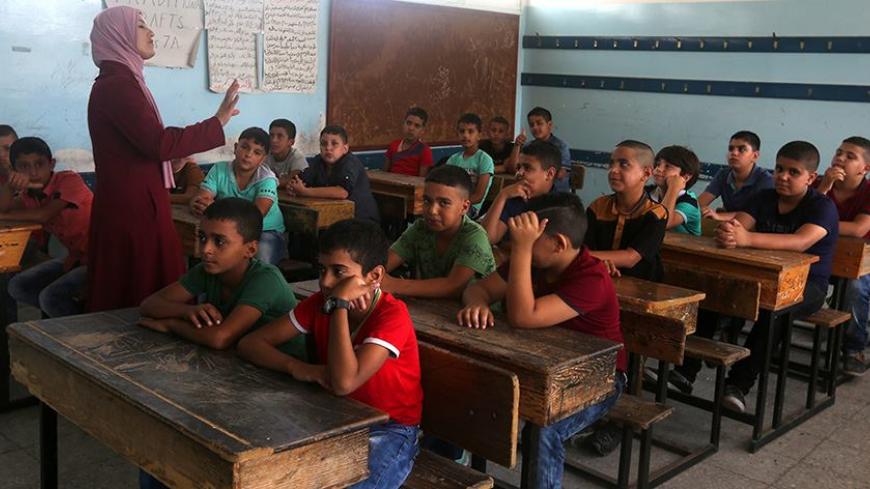 The Ministry of Education and Higher Education hopes the new law will bring about “a significant shift in the education system, promote educational development and boost the role of the local community and its institutions in this regard.”

Minister of Education and Higher Education Sabri Saidam told Al-Monitor that he was happy the law had passed. He said, “We are glad the law was ratified after six readings within the Cabinet and after all concerned parties — private and civil institutions — discussed it." He noted that he began working on this law the day he took office on Aug. 2, 2015.

The law includes 58 articles tackling all practical aspects and details of the education process. It will be enforced 30 days after its publication in the Palestinian Gazette.

Saidam said that the Education Ministry capitalized on the laws and experience of several international donors such as Ireland, Germany and Norway before drafting the law. The aim was to include the necessary notions and concepts to build an education process based on enrooting and developing knowledge, instead of opting for conventional education based on indoctrination. The new education system will be unified in Gaza and the West Bank.

The articles of the law tackle all issues related to the components of the education process such as setting clear educational objectives, specifying the Education Ministry tasks, enforcing compulsory education and imposing sanctions on violators, explaining the education stages from kindergarten to high school, approving of academic acceleration, putting measures and conditions for the licensing of private and foreign educational institutions, explaining the requirements of hiring teachers and establishing a code of conduct and an advisory board headed by the minister to offer recommendations and consultations to improve the educational process, curricula and extracurricular activities.

Saidam said Articles 26-27 of the law classifies teaching as a profession, describing teachers' responsibilities and duties. Those who want to become a teacher must obtain an occupational license from the Ministry of Education after completing a two-year training and receiving a good assessment.

The law also made way for academic acceleration, which allows smart and outstanding students to skip grades and be promoted directly to an upper grade or to enroll in university despite their young age. Article 13 states, “Education must be accelerated and the years of study must be limited for certain students who show intellectual abilities above their age. This would allow them to be promoted to higher classes quickly or to move from one level to another, provided that they satisfy certain requirements and instructions determined by the minister.”

Saidam said, “Academic acceleration is the contemporary notion that we have sought to introduce since it enhances the scientific and educational abilities of outstanding students. Within a few years, some child prodigies might enroll in Palestinian universities.”

The law also sheds light on the issue of dropping out of school and attempts to solve it by enforcing compulsory education. The school dropout rate reached 1.36% in 2016 and varied from grade to grade. In grade 4, the dropout rate reached 1.4%, while in grade 10 it was 3.2%, as per a survey published by the Education Ministry on Nov. 23, 2016.

Article 5 of the law stipulates education be at no cost in all governmental educational institutions and makes it compulsory until grade 10. Article 50 lays out punitive measures against the violators who would face a one-year prison sentence at most, pay a fine of maximum 1,000 Jordanian dinars ($1,409), or both. This applies to any guardian who does not enroll their child below the age of 16 in an educational institution or removes the child from the institution.

The law applies to all schools as per Article 2, be they public, private, foreign or community-based.

Majida al-Masri, a member of the Palestinian Education Coalition, a group of civil associations and local unions that lobby to reach policies and legislation that ensure free, compulsory and good-quality education for Palestinian children, told Al-Monitor, “Passing a law for education and higher education is an important achievement because the educational process has now been guaranteed and protected by the law as a mandatory right and organized profession.”

Masri said that the most important step is to ensure the effective implementation of the law, noting that she was hoping wider-scale deliberations about the law would be held with the civil society before the ministry issued it, given the absence of the Palestinian Legislative Council.

Although Saidam asserted that the law was shown to all social components, Masri disagreed with his statement and said, “This is not true. Although we applaud this law, it still needs further scrutinizing in some legal aspects. We plan to work on this in the future because we believe in the importance of partnership in planning, monitoring and accountability in the educational process.”

The law has now been ratified and the educational staff are eager to find out what the new school term in August will bring, since it will effectively put to the test the ministry’s ability to implement the articles of the law and help assess the results.