Could an offshore seaport be Gaza's salvation?

Israeli Transportation and Intelligence Minister Israel Katz continues to promote his idea of an artificial island and port off the Gaza coast and recently pitched it to President Donald Trump’s envoy. 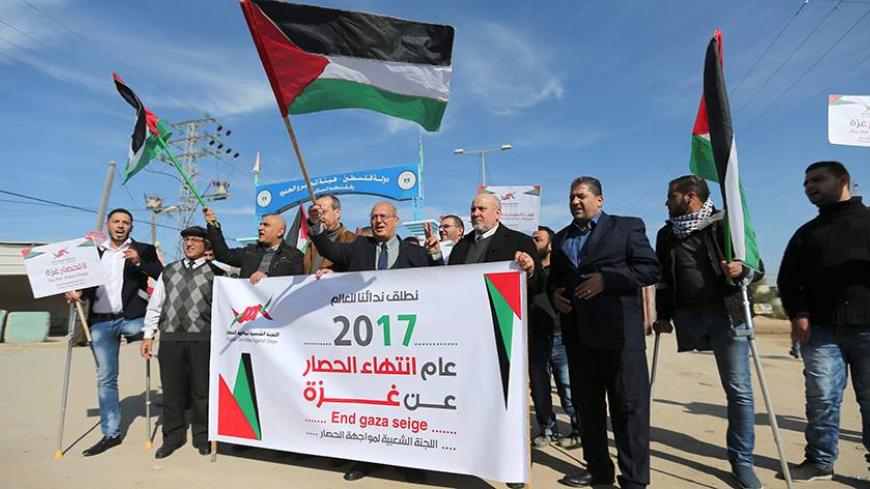 Transportation and Intelligence Affairs Minister Yisrael Katz has been trying for the past three years to promote what he considers to be a creative response to the decade-long Israeli blockade of the Gaza Strip and a measure to prevent yet another round of fighting with Hamas.

Katz's plan for a so-called civil separation from neighboring Gaza is essentially a sequel to the 2005 Israeli withdrawal from the territory orchestrated by Prime Minister Ariel Sharon that saw Israel pull all its settlers and troops out of the coastal enclave. The central idea of the Katz plan is for an internationally funded, artificial island to be built near the Gaza coast. Katz believes that the construction of such an island could be used to open Gaza to international commerce and result in a true Israeli separation from Gaza, as Sharon would have wished.

The island would serve as a sea trade port for Gaza residents. Ships would unload their cargo there, and after an inspection for weapons or weapons-grade material, the crates would be shipped on small vessels for the short onward journey to their destination. In Katz’s view, this would enable economic transportation links for the blockaded residents and at the same time protect Israel’s security interests.

The proposed island would also house power and water purification infrastructure, for which Gaza is dependent on Israel to a certain extent. Katz believes that once completed, the project would relieve Israel of a heavy moral responsibility and burden of the Palestinians in Gaza, which was under Israeli occupation for 38 years and for which Israel is still responsible under international law even after its 2005 pullout.

Most Israeli ministers view the grandiose Katz plan as ludicrous and unfeasible, but over time he has managed to win over supporters, among them senior defense and military officials concerned about the ticking time bomb that is Gaza blowing up in Israel’s face. Since the May 2015 formation of Benjamin Netanyahu's fourth Netanyahu government, Katz has tried, unsuccessfully and much to his chagrin, to bring his proposal up for debate by the Diplomacy and Defense Cabinet. The prime minister is not wild, to put it mildly, about the creative initiative of the man considered a political rival and with whom he has publicly locked horns several times over the past year.

Defense Minister Avigdor Liberman is also vehemently opposed to the plan, which he claims would do nothing to remove the threat to Israel’s security. Shin Bet also objects, believing the artificial island itself could turn into yet another keg of dynamite. Katz is not, however, giving up.

Katz presented the blueprint to Jason Greenblatt, President Donald Trump’s representative for international negotiations, on his visit to Israel at the end of March. Following their meeting, Katz said the envoy, tasked with promoting the peace process between Israel and the Palestinians, expressed his willingness to get the administration on board of the island plan. Katz also said the United States would play an important role in boosting and leading the initiative. He added that other states in the region and beyond might also have key roles in aid, planning and implementation, for example, by funneling billions of dollars to ensure the plan’s execution.

Katz is probably the only member of the Israeli government who does not view Gaza as just another threat to the country’s security. In addition, guided by the realization that the blockade cannot go on forever, he is serious about trying to find solutions for Gaza’s 1.8 million Palestinian residents. The plan’s main downside is its one-sidedness, as was Sharon’s unilateral withdrawal. The Palestinians were not asked about it — their opinion was not sought — and they were not offered any role to play in it.

In an interview with Al-Monitor, a senior Hamas political bureau official in Gaza said that building an Israeli-inspired island under full Israeli control would result in the perpetuation of the blockade. “Your minister is willing to invest billions of dollars to build a port that will serve Israel’s security, but this money could be used for millions of far more logical and feasible solutions,” said the official, who spoke on the condition of anonymity. Israel has been playing with the idea that it can continue to rule over residents of the Strip from the air, sea and land, he said, but he noted, “This cannot go on forever.” The only solution, according to the official, is to allow the Palestinians to build a seaport on Gaza's shore.

When asked about Israel’s concerns that a free port would enable Hamas and other Palestinian organizations in Gaza to smuggle in arms, he responded that the motivation of these resistance groups stems from their overriding desire to remove the Israeli stranglehold on Gaza. Hamas will soon unveil the movement’s new charter, he said, which will replace the old one that calls for the destruction of the State of Israel. “[It will] clearly show the conceptual change the movement has undergone in recent years,” he said. The new document, awaiting a green light from the Hamas leadership, will call for the establishment of a Palestinian state within the 1967 borders, with East Jerusalem as its capital.

Hamas' recognition of the 1967 borders as the basis of a future Palestinian state is not new. The movement’s leaders have for years been forced to adapt to the changing winds of the Israeli-Palestinian conflict and understand that wiping out Israel is not a realistic option. In a 2013 interview, senior Hamas official Ghazi Hamad told Al-Monitor that there are many in the movement who understand that things have changed since 1989, when the previous charter was formulated by the movement’s founder, the late Sheikh Ahmed Yassin. Hamad said at the time, “What I can tell you is that all factions in the movement agree to this and are prepared to accept it,” referring to a Palestinian state within the 1967 borders.

Will the plan conceived by Katz prevent the next war with Gaza? Probably not. Even if an artificial island were built off the coast, it would take more than a decade to do so. The residents of Gaza cannot wait that long.