An apparent chemical attack has ravaged a small rebel-held Syrian town and Turkey has found itself in the middle of the aftermath, torn between supporting anti-Assad rebels and its need to ally with Russia. 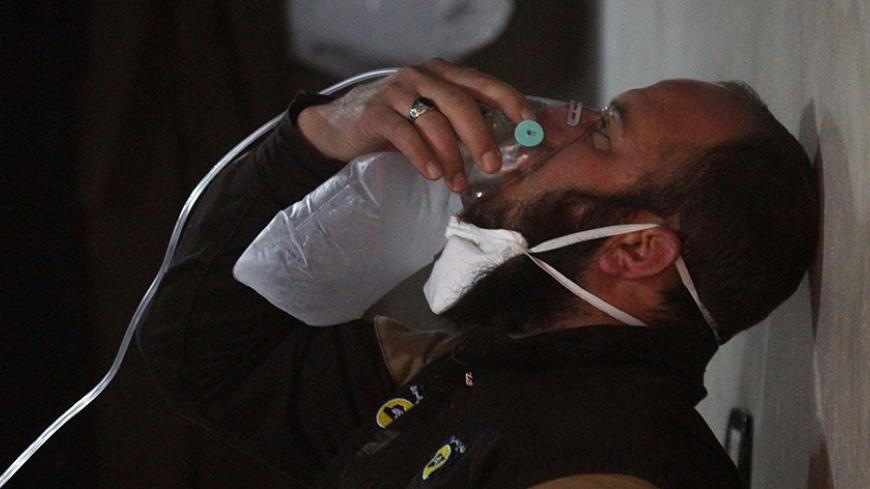 A civil defense member breathes through an oxygen mask after what rescue workers described as a suspected gas attack in the town of Khan Sheikhoun in rebel-held Idlib, Syria, April 4, 2017. - REUTERS/Ammar Abdullah

Turkey’s quest to justify its recent courtship of Russia looks more difficult today in the aftermath of a suspected chemical attack on a rebel-held town in Idlib province in northwestern Syria near the Turkish border.

At least 65 people were killed and 350 wounded by jets that struck Khan Sheikhoun in the early morning, the Syrian Observatory for Human Rights reported. The aircraft thought to belong to the Syrian air force then reportedly attacked local clinics treating survivors, medics and activists said. Horrific images of lifeless children, and of others foaming at the mouth and convulsing, have flooded social media. Turkey’s pro-government Yeni Safak newspaper claimed that a mosque was hit in the strikes.

Turkish President Recep Tayyip Erdogan described the attacks as “inhuman” and “unacceptable” in a telephone call with his Russian counterpart, Vladimir Putin, the semi-official Anatolian News Agency reported, but gave no further details of the conversation.

The type of agents used remains unclear, but the attack appears to be the deadliest and most toxic chemical attack in Syria since August 2013, when more than 1,000 people perished in the Damascus suburb of Ghouta after exposure to the banned toxin sarin.

Syria's military has denied using chemical weapons against civilians, saying it is too "honorable" to carry out such "heinous" crimes. Under threat of retaliation, Syrian President Bashar al-Assad agreed to scrap his country’s chemical weapons program. But his regime continues to use chlorine gas, international monitors say.

Turkey dispatched some 30 ambulances from Hatay province bordering Syria to help ferry the wounded to Turkish hospitals where the first victims are being treated.

Turkey was responding to appeals from Syrian opposition fighters, Andalou reported. Khan Sheikhoun is held by al-Qaeda-linked groups and Turkey is facing increasing demands from the United States and Russia to take firmer action against them.

In August 2011, Turkey began overtly supporting rebels seeking to overthrow Assad. Ankara plied them with weapons and allowed them to operate out of Turkish territory with scant scrutiny, enabling jihadis to slip through in the process. The policy placed Turkey at odds with the regime’s top backers Russia and Iran, a position that proved unsustainable after Turkey shot down a Russia jet in Syrian airspace in November 2015.

Russia reacted fiercely and only relented after Erdogan apologized for the incident last June, blaming it on rogue elements in the army. Putin pretended to believe him, but relations remain dicey.

Russia is bent on getting Turkey to withdraw support for all rebel groups that pose a meaningful threat to the Assad regime, and with the multiple ethnic Chechens among them, to Russia as well. Russia is deftly manipulating Turkey’s paranoia over Syrian Kurdish gains to pressure Ankara into action. Striking a balance between the Russians and his pious base, which detests Russia and Assad, is testing the limits of Erdogan’s political savvy in the run-up to the April 16 referendum on boosting the powers of his presidency.

After today’s carnage, defending rapprochement with Russia looks even trickier. Much will depend on whether US policy will be affected by the attack.

The White House condemned the Syrian government for what it described as a “heinous” and "reprehensible" attack against civilians. Spokesman Sean Spicer said Tuesday’s attack “cannot be ignored by the civilized world.”

But there is little evidence so far that the Trump administration is interested in regime change in Syria. US Ambassador to the United Nations Nikki Haley drew sharp criticism last week when she said it was not a priority.

Sam Heller, a Beirut-based analyst for the Century Foundation, told Al-Monitor, “This is going to be an important test of the extent of US repositioning on Syria, and the Assad regime in particular.” He added, “If Assad remaining is now a political reality — and realistically it is — then the regime doing horrible unconscionable things is part of that reality.”

Another reality is that Russia and the regime are not alone in causing civilian casualties. Airwars is a journalist-led transparency project that monitors and assesses reports of civilian casualties caused by the anti-Islamic State coalition, Russian and other airstrikes in Iraq, Syria and Libya. Its head Chris Woods told Al-Monitor that since January, “The coalition seems to be killing more civilians than the Russian campaign now.” This is probably because the coalition campaigns against IS in Mosul and Raqqa are fully underway.

Turkey’s hands are getting dirty, too. At least 300 civilians reportedly died in Turkish strikes that were carried out during a three-month offensive to seize the IS-held town of al-Bab. “The situation in Syria is such that civilians are at risk from all airstrikes,” Woods said.