How did humanitarian funds end up in Hamas' pockets?

Israeli authorities are accusing Hamas of stealing funds from humanitarian organizations working in the Gaza Strip, but any action to stop the embezzlement could harm the Gaza population the aid is intended for. 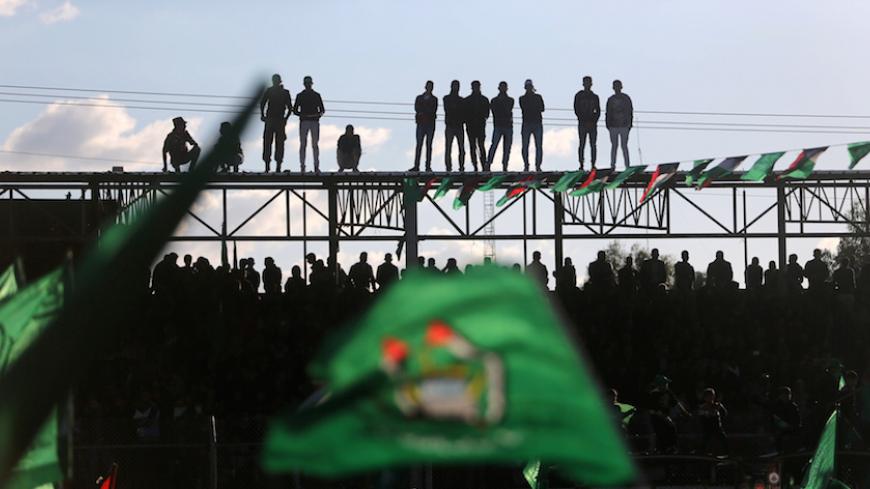 Palestinians take part in a rally marking the 29th anniversary of the founding of the Hamas movement, in Khan Yunis in the southern Gaza Strip, Dec. 11, 2016. - REUTERS/Ibraheem Abu Mustafa

Coordinator of Government Activities in the Territories (COGAT) commander Maj. Gen. Yoav Mordechai issued a serious indictment of Hamas this week, accusing the movement of abusing aid funds intended for the needy residents of the besieged Gaza Strip. The highly publicized accusation was posted on COGAT’s Arabic-language website Al-Munasq to send a clear message to the Palestinians that even as they were suffering deprivation and poverty, Hamas was partying at their expense. The post read, "The egotistical Hamas terror organization has robbed funds that are meant for the needy of Gaza from international organizations. Hamas prospers at the expense of the residents of the Strip and uses donations meant for them to finance terror. How long will the world and the Gazan people ignore this?"

About a month ago, Israel detained Muhamad Murtaja, who in recent years headed the Gaza branch of the Turkish humanitarian aid agency TIKA. In a March 21 indictment, Israel accused Murtaja of abusing his position to help Hamas activists. According to the information issued by the COGAT’s office, Murtaja invented a list of needy Palestinian students residing in Gaza, withdrew $3 million for them from the organization’s account and transferred the money to members of Hamas.

Another example of these money-transfer schemes was described by the COGAT as a “terrorism wedding.” TIKA transferred $4 million to Gaza for a mass wedding ceremony for young Gaza couples. Murtaja is said to have told investigators that Hamas leader Ismail Haniyeh and his son, Abdel Salam, together with other senior officials of the organization, made up the list of participants and excluded anyone not a member of the organization.

Mordechai was cautious in formulating his accusations, stressing that the heads of the Turkish aid agency were not involved in the embezzlement and had not known about the theft.

Israeli military officials have long claimed that Hamas planted activists within the various foreign aid organizations operating in Gaza and that they were trained to find loopholes through which to embezzle funds to pay for the lavish lifestyles of its top officials and to buy weapons for its military wing.

Last August, an indictment was submitted to the Tel Aviv District Court against Mohammed Halabi, a Hamas member Israel claimed had managed to insinuate himself into World Vision, one of the world’s largest Christian humanitarian organizations, operating under the auspices of the UN Relief and Works Agency (UNRWA) in Gaza. According to the indictment, by virtue of his position Halabi was able to transfer raw materials to Hamas for construction of its tunnels and subsequently large sums of money too.

An Israeli defense source told Al-Monitor on condition of anonymity that the Israel Defense Forces are familiar with Hamas' modus operandi. He said its people have infiltrated almost every aid organization operating today in Gaza, and they “take a cut” for Hamas. The source explained that the organizations are often aware of the theft but turn a blind eye to it out of concern that if they speak out, Hamas would hinder their operations. According to the source, a pattern of silent acquiescence has emerged: Hamas diverts some of the organization’s resources for its own needs and in return guarantees the continuation of Gaza aid work. Mordechai's main point in his message, however, was that money taken by Hamas is in fact stolen from the needy people of Gaza.

In the case of World Vision as well as in the alleged TIKA embezzlement, the COGAT passed on to the organizations information obtained during Israeli investigations before it was made public. A spokeswoman for World Vision responded that Israel’s claims were untrue. Al-Monitor sought reaction from TIKA office in the West Bank city of Ramallah and was told that the details were being studied by organization's heads and they would issue a statement soon. Speaking on condition of anonymity, one of the organization’s employees did say that TIKA is establishing broad infrastructure in Gaza, such as a large hospital in which tens of millions of dollars in Turkish government funds had already been invested. According to the official, even if it turns out that the suspicions are true and large sums of money had indeed been embezzled, it will not reflect negatively on the organization, which is under rigorous supervision. “There’s corruption everywhere in the world — in Israel too,” he argued.

Hamas is treating the accusations with derision. A Hamas source who spoke to Al-Monitor on condition of anonymity said the Israeli claims were false, like others made by Israel in the past. He said the mass wedding in Gaza has not been a closed event for Hamas members only. Some 200 couples were married and each received a wedding gift of $1,000, he said.

But despite the denials, the residents of Gaza are fully aware that Hamas activists benefit from aid funds by their very proximity to those in power. A resident of the Gaza town of Khan Yunis who asked to be identified as N. told Al-Monitor that preferential treatment of Hamas members over other residents of the Strip is nothing new. During the most difficult days of the siege of Gaza, he said, Hamas members and their families continued to get regular meat supplies, and now they’re getting regular charitable funds in addition to toys and other gifts for their children. N. added that those hired for vacant positions in Gaza government offices are mostly Hamas activists.

"But that doesn’t surprise us," he said. "Fatah did the exact same thing [until 2007], taking care of their own people first. We were only the miserable ones who paid the price, and we’re paying it to this day."

If Israel is right and Hamas has managed to plant its people in all the Gaza aid organizations, could the practice be stopped? Even if all its claims are proven justified, most residents of Gaza survive today thanks to these organizations, and any blows or sanctions against them would result in disaster. This, without a doubt, is the price of the siege.