Iran’s president, who is on a two-day trip to Moscow, holds “important” meetings with Russia’s president and prime minister. 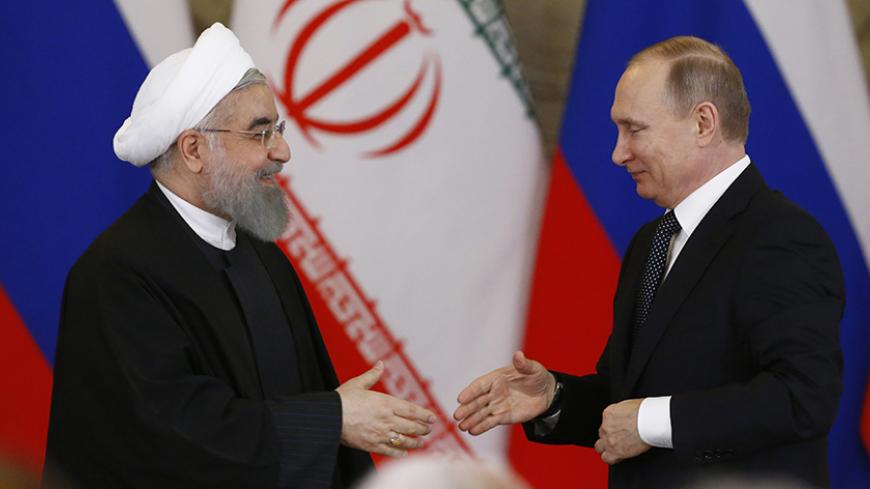 Iran’s President Hassan Rouhani arrived in Moscow on March 27 for a two-day state visit on the official invitation of his Russian counterpart, Vladimir Putin. The government-run Iran daily on March 28 placed the landmark trip within the context of regional developments, writing, “Syria has faced important developments following Iran and Russia’s cooperation, and terrorist groups have been forced to retreat from Aleppo. Iraqi military forces are advancing toward the last stronghold of Daesh [the Islamic State], and Mosul is close to being fully liberated. Turkey is dealing with political crises, an important referendum in April is being held in some European cities for [expatriate] Turks, and Turkey has triggered new challenges against Iran and Russia. The Yemeni crisis has not only not abated, but it has been exacerbated. [Meanwhile], Iran and Saudi Arabia’s relationship is facing tension."

Rouhani first met with Russian Prime Minister Dmitry Medvedev. Following the meeting, Rouhani said, “There is no doubt that cooperation between [our] two countries positively impacts stability and security in the region and in the world.” Medvedev described the Iranian president’s visit as a significant step in the development of relations and said it can aid the development of deeper bilateral ties.

On March 28, Rouhani received an honorary degree from Moscow State University and addressed professors and students at a ceremony. "Resolving the issues of today's world requires cooperation among scientists and governments," Rouhani said, adding, “The decline of the West's dominance and the end of the monopoly on wealth is a historic opportunity to build a new world.”

Noting that “there should be a global consensus to root out extremism and violence,” Iran’s president emphasized, “Islamophobia, racism and takfiri [jihadi] ideas have common roots."

Noting the progress made against militants in Syria due to cooperation between Moscow and Tehran, Rouhani said, “Now the time has arrived to provide a situation for the return of refugees to their homeland with the help of all countries of the region.”

Also on March 28, Rouhani and Putin held “important” and “intensive” negotiations about regional and global issues as well as about the bilateral relationship. Referring to the 515 years of diplomatic ties between Tehran and Moscow, Putin said, “Iran is a good neighbor and a stable and reliable partner.”

On his part, Rouhani said, “The cooperation between Tehran and Moscow is not targeted at a third country." He added, “Iran and Russia’s relations are being conducted to enhance stability in the region, and the main intention of the two countries is to strengthen regional peace and tranquility.”

Iranian and Russian officials signed 14 documents on cooperation in the political, economic, scientific, legal and cultural fields on March 27 and 28. The two sides also signed other documents in the fields of information and communications technology, mining, railroad construction, extradition of criminals, nuclear energy, electricity, exports and tourism.

Iran’s Foreign Minister Mohammad Javad Zarif, who is accompanying Rouhani, said March 28, “Russia doesn't have a military base [in Iran], we have good cooperation, and on a case by case basis, when it is necessary for Russians fighting terrorism to use Iranian facilities, we will make a decision.” In August, Russia used Shahid Nojeh air base in northwestern Iran to conduct airstrikes in Syria. However, use of the base turned out to be short-lived, given a strong domestic backlash in Iran over a foreign country’s use of local military facilities.