Iran’s former President Mahmoud Ahmadinejad’s attempts to attract attention ahead of the May 19 elections spark outrage among moderates and Reformists. 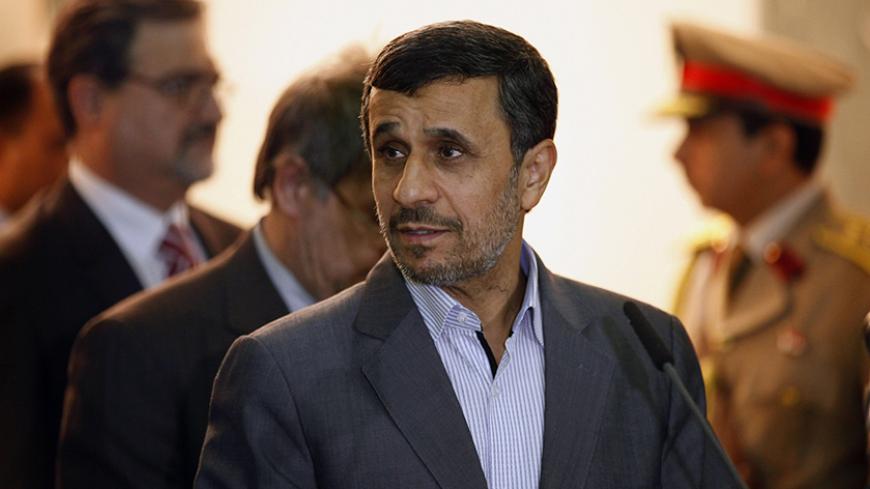 Former Iranian President Mahmoud Ahmadinejad, who in September was “advised” by the supreme leader, Ayatollah Ali Khamenei, not to run in the May 19 presidential elections, has been writing letters and statements addressing US President Donald Trump and the Iranian government. In the face of opposition from the ruling establishment, Ahmadinejad is trying to maintain a presence on Iran's political scene by attracting the attention of the media and the public through the issuance of statements and by encouraging his former deputy, Hamid Baghaei, to run in the upcoming polls.

In a Feb. 26 letter to Trump, Ahmadinejad urged him to “reform the political structure of the US,” raising eyebrows in Iran and eliciting criticism from Reformist as well as moderate media outlets. The letter was rejected by the Swiss Embassy, which represents US interests in Iran. According to Iranian media reports, the embassy told the Iranian Foreign Ministry that it was not its responsibility to play “postman.”

In addition to writing to the US president, Ahmadinejad has been releasing various statements against the moderate government of President Hassan Rouhani. In one, Ahmadinejad slammed his successor for saying that the Iranian treasury had been empty when he took office in 2013. Ahmadinejad wrote March 4, “It should be made clear why such claims were brought up prior to negotiations with foreigners.” By “negotiations with foreigners,” Ahmadinejad meant the nuclear talks with the six world powers that resulted in the Joint Comprehensive Plan of Action in July 2015.

Government Spokesman Mohammad Bagher Nobakht reacted to the former president’s statements on March 14, stating sarcastically, “Ahmadinejad is good at writing letters to presidents and different officials.” Nobakht also said that the Economic Affairs and Finance Ministry and other relevant institutions would respond to Ahmadinejad’s recent statements.

Since Baghaei announced his run for office on Feb. 20, reports about the former president’s intentions have occupied Iranian analysts and media. On March 15, Nameh News, which is close to Rouhani’s justice minister, Mostafa Pourmohammadi, claimed that on the day for candidates to register, Baghaie will not show up at the Interior Ministry, and instead Ahmadinejad and his controversial adviser, Esfandar Rahim Mashaie, will appear to register.

If Ahmadinejad enters the fray, it will be in defiance of the supreme leader. Given this, if Ahmadinejad and Mashaie register themselves for the balloting, they will probably be disqualified by the Guardian Council, which is dominated by conservatives and tasked with vetting candidates based on a number of criteria, including their commitment to following the supreme leader.

In other news, Ezzatollah Zarghami, former head of the state broadcaster, officially announced his candidacy March 15. Zarghami is the latest conservative figure to enter the field. The conservatives are still divided over whom to select as a consensus candidate for the May 19 vote.