In Gaza, baseball season is in full swing

Palestinian athlete Mahmoud Tafesh has formed the first baseball team in the Gaza Strip, and despite the absence of funding, equipment and baseball fields, the team is hoping to compete in the 2020 Olympic Games. 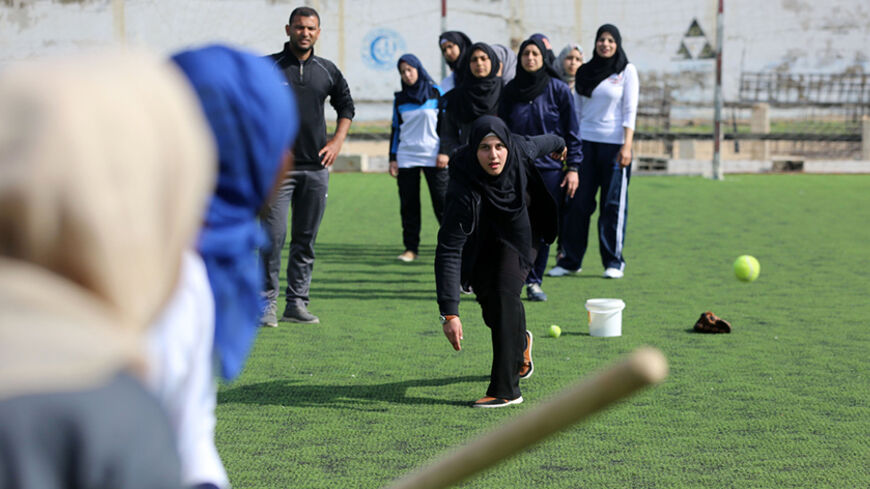 GAZA CITY, Gaza Strip — The first baseball team in the Gaza Strip was established on Feb. 22, and for the first time a number of youths started playing baseball in Gaza City, despite the lack of funding and access to a proper baseball field.

Palestinian athlete Mahmoud Tafesh came up with the idea of establishing Gaza's first baseball team and baseball federation. In April 2016, Tafesh, 35, attended a baseball training course for coaches in Egypt and returned to Gaza where he organized the first baseball introduction course for Palestinian amateurs on Oct. 18. Tafesh is the first baseball coach in Gaza and the chairman of the Palestinian Federation of Baseball and Softball, whose board of directors had its first meeting Jan. 17, after it obtained a license from the Ministry of Youth and Sports.

Tafesh told Al-Monitor, “The federation seeks to make baseball well known to Palestinians, help male and female amateurs to become professional baseball players and train local coaches and referees.” He said that 20 male and 20 female amateurs joined the federation for training purposes, and that it will be the nucleus of the first women’s and men’s baseball teams in the Gaza Strip.

Iman Moghayyer, 23, has a bachelor's degree in physical education and sports from Al-Aqsa University in Gaza, and she is a member of Gaza's baseball team. She told Al-Monitor that she has loved baseball since she was a child and enjoys watching Major League Baseball on TV at home in Gaza City.

Moghayyer said, “It is a very exciting sport that is new to Palestinians. It requires that the players be fast and fit. It is the first time in my life that I play baseball in Gaza.”

She explained that the training is still for beginners, focusing on how to play baseball, hit the ball with the bat, and catch and throw it.

Moghayyer hopes to become a professional baseball player, take part in international championships and have her country take a place among the winners.

Team member Adnan Afifi, 28, told Al-Monitor that he decided to join the team after taking part in the training course with Tafesh and enjoying it.

He said, “Although some of the team members reside in cities — such as Rafah in the southern Gaza Strip — they travel to Gaza City for the training because they love baseball and have the will to become professional players.”

Commenting on the federation’s expansion efforts, Tafesh explained that a number of sports clubs in Gaza have persuaded members to get to know the game. He stressed that sports clubs will create their own teams in the future, as a prelude to the first tournament in the Gaza Strip.

Yet he complained that there are no baseball fields in Gaza in the absence of official funding. He said, “For the team to take training classes, we hire a local football field for 200 shekels [$54] per hour. I pay for the rental costs at my own expense. We use an easily removable spray paint when drawing white lines on the field to make it suitable for playing baseball.”

He added, “In addition, we don't have baseball equipment; we are using a tennis ball instead of a baseball. We also lack baseball bats and helmets.”

Bilal Shaer, the head of the federation's training department, told Al-Monitor, “The team attends one training session per week, due to the lack of baseball fields.”

He added, “The Palestine Olympic Committee promised to support baseball should the federation manage to popularize the game, prove itself in Gaza and convince the sports community in Gaza to support it. This is what we are working to achieve.”

He noted that no complex conditions are required for the youth to join the federation, except for the beginners to be physically fit and have the desire to become professionals.

Tafesh hopes that the local authorities in Gaza inaugurate a baseball club, and he stressed that he will be working hard to lead the first baseball team to the 2020 Olympic Games in Tokyo.

Until then, Tafesh will have to make tremendous efforts to build baseball facilities in the Gaza Strip, which continues to suffer the impact of destruction of the 2014 Israeli war, causing sports in general to be at the bottom of the priority list of the local authorities.