A bipartisan Senate bill to slap terrorism sanctions on the Iranian military raises questions about its practical impact. 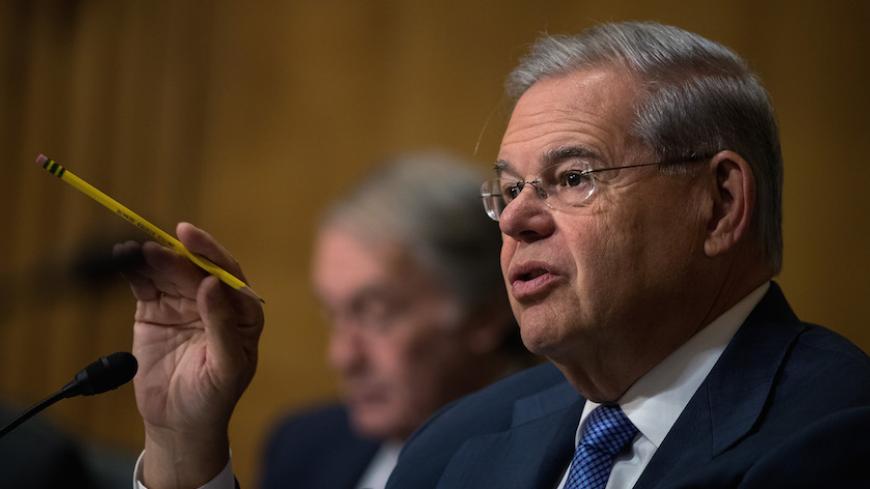 A key provision in the bipartisan Iran sanctions bill that the Senate introduced last week is causing widespread confusion and debate about its potential impact.

Advocates of the Iran nuclear deal argue that the bill from Senate Foreign Relations Chairman Bob Corker, R-Tenn., would label the 100,000-strong Islamic Revolutionary Guard Corps (IRGC) a terrorist group and trigger a showdown between the United States and Iran. Others, however, say it wouldn't add any new sanctions on Iran.

In a testament to the complexities of US sanctions law, both sides could be right. In fact, what people think the law does — not its actual substance — may well decide both its fate in Congress and the reaction in Iran.

At issue is a provision in Corker's bill that calls for extending terrorism sanctions to the IRGC. Those sanctions are codified under an executive order signed by President George W. Bush in October 2001 that blocks the property of designated terrorists and prohibits transactions with them; Bush expanded the order to cover the IRGC's Quds Force in 2007, and Corker's bill would treat the entire IRGC the same way.

"We apply terrorism sanctions against them, we just don't designate them as a terrorist entity," said Sen. Robert Menendez, D-N.J., a bill co-sponsor who helped craft the provision.

It's not clear, however, that the Donald Trump administration could in fact sanction the IRGC without labeling it a "specially designated global terrorist" as it does the Quds Force, said Katherine Bauer, a 10-year veteran of the Treasury Department now with the Washington Institute for Near East Policy.

Advocates of the nuclear deal agree. The National Iranian American Council warned in a Huffington Post op-ed that the deal would be in danger if the United States designates the IRGC as a terror group.

"Designating a foreign military branch as a terrorist organization is an extremely dangerous provocation that Pentagon leaders in multiple administrations have advised against," National Iranian American Council Policy Director Jamal Abdi wrote. "If this legislation is passed the US can expect a negative response from Tehran that will undermine moderates in Iran’s upcoming May elections and empower anti-US hardliners. The ranking member of Iran’s parliament, Alaeddin Boroujerdi, has already signaled that Iranian lawmakers will consider designating the US Army as a terrorist organization in retaliation."

Such a designation has been a priority of the pro-Israel American Israel Public Affairs Committee (AIPAC) for years. An AIPAC memo released last month and shared with members' offices calls for designating the group under the Bush order.

"The IRGC, both directly and through its proxies, supports terrorist activities throughout the world," the Feb. 21 memo states. "This designation would clear up an anomaly in current US policy: Although there is no practical difference between the IRGC and its foreign activities branch known as Quds Force (IRGC-QF), the US government has only designated the latter."

AIPAC did not respond to a request for comment.

Ironically, experts point out that extending the terrorist designation to the IRGC would have little to no impact on US sanctions. The IRGC is already covered under ballistic missile and human rights sanctions authorities, making new terrorism sanctions largely duplicative.

"While there is no doubt that elements of the IRGC, such as the Quds Force, have engaged in support for terrorism, a designation would do little to strengthen sanctions against the IRGC, since it has already been designated under other authorities," Bauer said.

As a result, lawmakers such as House Homeland Security Chairman Michael McCaul, R-Texas, and Sen. Ted Cruz, R-Texas, have introduced legislation to instead designate the IRGC as a foreign terrorist organization. Such a designation notably carries with it criminal penalties, including long prison sentences not just for American citizens but for foreigners as well.

"We should expand sanctions on Iran's army of terror — the [Islamic] Revolutionary Guard Corps," House Speaker Paul Ryan, R-Wis., said at AIPAC's annual conference March 27. "I think we need to consider designating them as a foreign terrorist organization, if you ask me."

A number of experts, however, have warned against using the foreign terrorist organization designation, which was designed to combat nonstate actors, to a government entity such as the IRGC.

"I’m wary about sort of picking good guys and bad guys within the Iranian regime," Michael Singh, a former senior director for Middle East affairs in Bush's National Security Council now with the Washington Institute for Near East Policy, said at a Senate hearing March 28. "The real problem here is state policy, and I think we need to remain focused on that.”