What the US stands to lose by alienating Morocco

After Donald Trump's election, abrupt and extreme changes in US policy threaten its relationship with longtime ally Morocco. 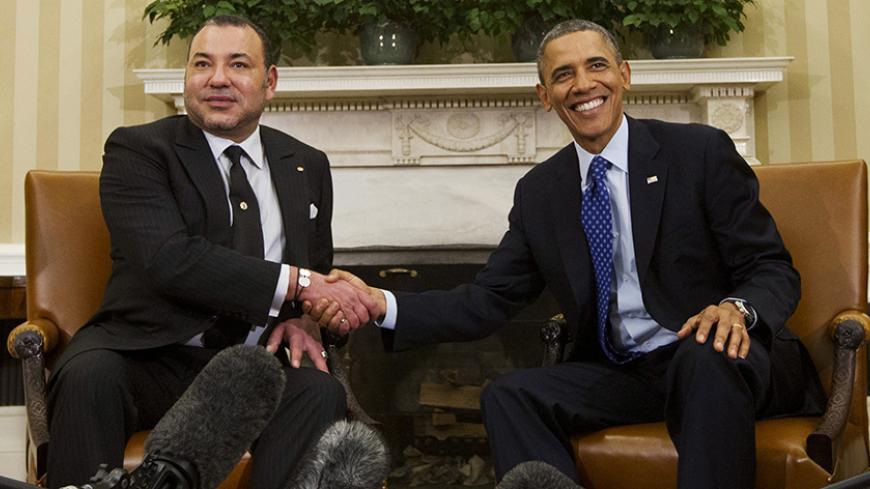 US President Barack Obama (R) shakes hands with King Mohammed VI of Morocco in the Oval Office of the White House in Washington, Nov. 22, 2013. - REUTERS/Jason Reed

With a new administration in the White House, Morocco’s need for foreign political and economic support could lead it to turn away from its long and friendly relationship with the United States and look more toward China and Russia to safeguard its interests.

Morocco is a traditional ally to the United States. The kingdom was brought up multiple times during the 2016 US presidential campaign — but not for praise. At times, Morocco became the center of Donald Trump’s efforts to discredit Hillary Clinton, as he described her relations with Morocco as a “pay-for-play” policy.

The uproar resurfaced when the Trump camp used footage of immigrants crossing from Morocco into Spain in a political ad about the wall Trump intends to build on the US-Mexico border. The business mogul and former reality TV star responded with a controversial comment, dismissing Moroccan concerns by saying, “It was just footage.”

Morocco is one of the leading promoters of the United Nations' environmental agendas, and recently hosted the Conference of the Parties to fight climate change — which President Trump has repeatedly called a “hoax.”

Other indications of deteriorating relations between Morocco and the United States emerged in April 2016, when the State Department issued its annual human rights report, which found that "systematic and pervasive corruption undermined law enforcement and the effectiveness of [Morocco’s] judicial system," adding that "impunity was pervasive.”

However, military, economic and security cooperation has been the barometer of Moroccan-US relations, and each subsequent US administration has recognized the necessity of continuing to develop such an alliance, even to this date.

Samia Errazzouki, a Moroccan-American writer and co-editor of the online magazine Jadaliyya, believes the US-Moroccan connection is too important to be dismantled by the Trump administration.

“I think US-Moroccan relations are bigger than the Trump administration,” she told Al-Monitor. “Morocco has cooperated with international intelligence agencies for the past few years when it comes to monitoring [the Islamic State], and I don't believe the US is in a position to give that up.”

Since 2014, the United States has increased its counterterrorism military assistance to North Africa by 93%. The United States is the world’s top military arms exporter, and Morocco has been on the receiving end of numerous grants and contracts with various American companies.

In December 2016, the State Department agreed to sell Morocco $108 million worth of anti-tank missiles and related support.

“This proposed sale will contribute to the foreign policy and national security of the United States by helping to improve the security of a major non-NATO ally that continues to be an important force for the political stability and economic progress in North Africa,” the Defense Security Cooperation Agency said in a news release. “This proposed sale directly supports Morocco and serves the interests of the Moroccan people and the United States.”

The United States also agreed to grant $7 million worth of military aid to the Moroccan Royal Army in 2016.

Morocco has international allies, including the United States, because of its strategic geographic locations, as it borders Europe. But Trump’s attitude differs significantly from that of his predecessor. Trump has explicitly expressed his determination to make foreign countries pay their “fair share” for security costs. Morocco could be included in the club that might suffer from these cuts.

During the past week, the new American administration has already shown an interest in disengaging from global trade treaties and withdrawing from the Trans-Pacific Partnership trade agreement.

Morocco, however, seems to have found new heavyweight partners such as China, which has been competing with the United States to be Morocco’s third-largest external supplier. In May 2016, Morocco’s king visited Beijing to meet with President Xi Jinping and sign a strategic partnership to develop bilateral ties.

“Morocco has already begun courting China, with talks of a Chinese-built industrial city in Morocco and greater trade connections between the countries. Morocco's foreign policy is being guided by the vision that all options must remain open, and if that means courting China, it will do so,” Errazzouki said.

Spain remains Morocco’s largest trade partner, followed by France. Both European countries have supported Morocco’s controversial claim on the Western Sahara in the UN Security Council for more than 40 years.

In December 2016, the king went to Nigeria to discuss developing a gas pipeline that would cross through Morocco to Europe. This effort also seems to be drawing the interest of Russian officials.

“So far, it seems that Trump is in support of greater American isolationism, and that could mean giving way for greater Russian influence in Morocco. We somewhat already see that happening with King Mohammed VI's visit to Russia last year and high-level Russian officials visiting Morocco as well,” Errazzouki told Al-Monitor.

On the other hand, the Western Sahara question has also shaped Moroccan foreign policy, as Morocco seeks to maintain its control over the disputed region. On Jan. 30, Morocco was readmitted to the African Union after a divorce related to the disputed area that lasted more than 32 years.

Now one of Morocco’s priorities is to secure powerful allies on the UN Security Council to back its claims over the territory. Trump’s approach has already revealed his nationally based interests, which have caused chaos all around the world. Other factors such as the continuous rise of alt-right movements in Europe — in France in particular — could also increase the possibility of a stronger Russian-Moroccan alliance.

“With the far right on the rise in France, Morocco has to ensure support from a country with vetoing powers on the UN Security Council,” Errazzouki said. “If that means giving up on the United States and France in favor of Russia and/or China, Morocco will do whatever is necessary to ensure the support of a powerful country to maintain the status quo when it comes to the Western Sahara.”

Amid this fierce competitiveness and shifting geopolitical dynamics, Morocco could also use its tourism strength to get Trump’s attention. Morocco is relatively secure amid the instability in the region, especially compared with Tunisia, its main touristic rival. In 2014, Morocco welcomed more than 10 million tourists.

“Morocco is a major tourist hub in North Africa,” Errazzouki said. “With resorts and golf courses on the rise in Morocco, it could be an attractive site for Trump investments — but such a decision would be under heavy scrutiny both in the US and Morocco.”

Morocco has always enjoyed a special relationship with the United States and was the first country to recognize US sovereignty and its independence from England. European and American interests often intersect in Morocco. But as the United States pulls back, China and Russia stand to gain significant economic and political influence in the region.