What's behind Erdogan's flurry of activity on Taksim mosque?

As construction on Istanbul's controversial Taksim mosque project begins with sudden urgency, the lack of public reaction may signal an important message. 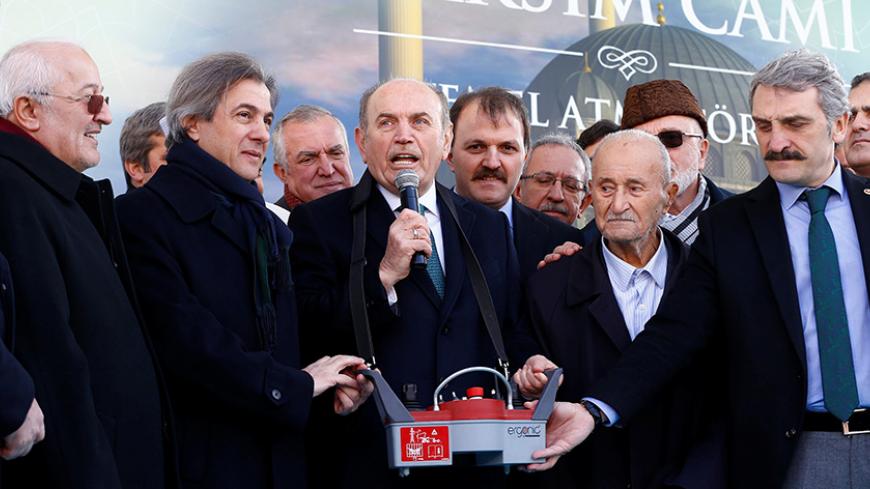 Turkish President Recep Tayyip Erdogan made two promises that were especially significant to his supporters: He would open the Hagia Sophia as a mosque and build a mosque in Taksim Square. Now he is delivering on one of them.

On Feb. 17 in Taksim Square, the heart of Istanbul, officials held a ceremony to celebrate the launch of the Taksim mosque construction project. The mosque is expected to open for service during Ramadan in 2018 (mid-May to mid-June). Conservative segments of society have sought the mosque since 1968, as Istanbul Mayor Kadir Topbas explained during the groundbreaking ceremony. Despite serious fears of protests, none materialized. In fact, there was only a small crowd cheering for the project that’s the crown jewel of the ruling Justice and Development Party (AKP). It was indeed a low-key event, with more police and workers present than spectators.

Al-Monitor asked art historian Murat Ozer about the significance of the mosque. Ozer, who is chairman of the nongovernmental organization Imkander, was candid. “Since the conquest of Istanbul [in 1453], mosques have been erected all around the city, particularly around the palace and in the districts frequented by Muslims," he said. Though the area where Taksim Square now stands was historically considered a non-Muslim area, "By the 17th and 18th centuries, the population changed and Muslims in the area needed a mosque. Hence a mosque and barracks were built at the location where today the new mosque is being built. After the establishment of the Republic, the barracks and the mosque were demolished to make room for a big public square like in all major European cities.”

Ozer’s analysis, as well as Al-Monitor’s previous reporting, shows that the Taksim district has always been a contested area among people of different political views. The many battles for Istanbul’s soul have always left their distinctive marks on the district. Although there are about a hundred mosques in the Beyoglu district, there are only three around Taksim Square. Ozer, along with observant Muslims, argues that three mosques cannot serve the densely populated streets there.

Erdogan has voiced this concern many times while explaining that his vision for Taksim will include a mosque next to the existing Hagia Triada (Holy Trinity) church, reflecting Turkey's cultural heritage. Ozer told Al-Monitor, “It is crucial that historic sites are being taken into consideration in the design of the mosque. For example, it is designed to be not taller than the churches in the neighborhood.”

On Feb. 10, Mevlut Tezel, a columnist for pro-AKP daily Sabah, published a piece echoing Erdogan’s words from 2013, asking for stores that block the view of the church to be demolished.

The Hagia Triada, which dates back to the late 19th century, is the largest church for the dwindling Greek Orthodox community in Turkey. The stores in question are the property of Balikli Greek Hospital, which is a foundation of the Greek community. The rent from these stores is the hospital’s main income. Demolishing these buildings, even with compensation for their real estate value, would be a significant blow to the hospital. Plus, intriguingly, removing the stores isn't necessary to open up the view of the church, as the church’s entrance faces the opposite street. Hence, to demand the removal of these buildings to make the church visible doesn't make sense to anyone who knows the area.

There are other peculiar facts surrounding the hasty construction project. For example, the Cultural Monuments Preservation Board just approved the construction plans Jan. 19. The project did not go through an open bidding process. Rather, it was handed to the Sur Construction Co., which promised to do it “for free, to be in good graces of God.” When asked why the project was not available for public bidding, Adnan Ertem, director of the General Directorate for Foundations, said, “The owner of Sur Construction is a resident of the district and was born and raised here. He had been dreaming of this mosque all his life, so he appeared as a candidate to take the project and we signed the protocol.”

The mosque's architect is Sefik Birkiye, who designed Erdogan’s glorious palace in Ankara.

In 2013, during the Gezi protests, Erdogan angered secular Turks with his repeated promise of a Taksim mosque and reconstruction of the barracks. It was particularly peculiar that he reminded the public, just a few days after the July coup attempt last year, “Whether they want it or not, we will build the mosque in Taksim."

Yet not all influential pious Muslims are convinced that the Taksim mosque is important. For example, Ismet Ozel, a prominent Muslim poet and scholar, said in a 2012 interview that he views these grand mosque projects, including the one proposed for Taksim, as showy government self-promotion. Even at that time he had warned that the government should urgently focus its efforts on sustainable projects that will benefit the public.

The lack of supporters or even protesters at the groundbreaking indicates a lack of public interest in the matter. So why was there such urgency to start the Taksim mosque project during such a difficult time in Turkey?

Several Twitter users suggested it just might have something to do with the April 16 referendum on constitutional amendments that would broaden Erdogan's powers immensely. Perhaps Erdogan could also complete the Hagia Sophia mosque project before then, they joked.

It was mostly pro-AKP and Islamist networks that announced the construction plans for the Taksim mosque. Some of them used passionate language, such as, “Istanbul will now be saved from the shame" of having no mosque in the square. The few remaining opposition dailies questioned why the project was rushed and why there was no open public bidding for the construction — yet they didn't carry the issue front and center. So why didn't the seculars react?

First, the opposition has learned significant lessons. They refrain from engaging in any sort of sharp, reactionary moves that involve Islamic symbols. No one wants to be labeled anti-Muslim, or seem opposed to a place of worship. So even those who agree Turkey needs more hospitals and schools — not mosques — prefer to remain quiet.

A college student and left-wing activist from Ankara told Al-Monitor: “There have been so many attempts to provoke us and pious Muslim groups prior to the referendum. [The government] sacked hundreds of academics.” The activist also cited the media's unusual coverage of an incident on a bus in which a woman yanked off a girl's headscarf and accused her of being a terrorist. "In a country where every day a woman becomes a victim of murder or rape, this attack became the main highlight. But [still] people did not take to streets.”

It is counterintuitive that a government would want people clashing on the streets, as anti-government protests are usually a means of holding leaders accountable. However, the AKP has skillfully used moments of chaos to unite people behind the issue of national security. Several opposition politicians, such as Umit Ozdag, former deputy leader of the Nationalist Action Party, fear the AKP is trying to generate "controlled chaos" prior to the April referendum. Hence, the opposition groups are so far staying quiet in the face of all provocations.

So the Taksim mosque project — dreamed of for decades and rushed into in the past couple of months — is just seen as another attempt to create an environment where Erdogan’s base would feel the urge to rally around the flag for the referendum. So far, it hasn't worked.