Turkey, while seeking to access Gulf funds and boost its defense industry exports, has risked economic relations with Iran — but the risk could also hold opportunity. 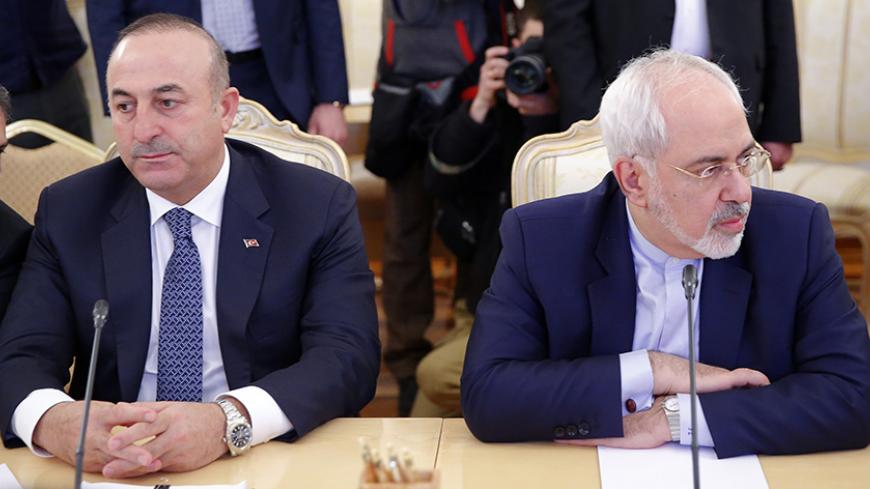 For hundreds of years, since the 1639 Qasr-e Shirin Treaty, Turkey and Iran have maintained a pretty peaceful coexistence, not letting occasional political spats and regional rivalry affect their economic relations. Both sides have become masters of not crossing critical thresholds in their relations. But political tensions arising from the Syrian civil war have eroded that mastery, and economic relations are now threatened.

In a statement last week in Bahrain, Erdogan accused Iran of trying to split Iraq and Syria by resorting to Persian nationalism, which he said had to be prevented. Cavusoglu, speaking Feb. 19 at the Munich conference, said, “Iran is trying to create two Shiite states in Syria and Iraq. This is very dangerous. It must be stopped.”

Not surprisingly, Tehran was angry. Iranian Foreign Ministry spokesman Bahram Ghasemi replied strongly, saying those who support terror organizations, who cause bloodshed, who lead the way to tensions and instability in the region cannot escape from their responsibility by accusing others. “We are acting patiently, but there is a limit to that. If our Turkish friends repeat these type of remarks, we will have to respond.”

The tension cast a shadow over the Turkey-Iran Business Forum scheduled for Feb. 25 in Tehran. Turkey was going to be represented by Minister of Economy Nihat Zeybekci, and Iran by Minister of Industry, Mining and Trade Mohammad Reza Nematzadeh. Because of the polemics between the two countries, Zeybekci canceled his trip. The forum was then postponed. It's not known if new dates are being set.

This was major. The Foreign Economic Relations Board of Turkey (DEIK) had arranged for executives from about a hundred Turkish companies to attend. Officials also had planned during the forum to inaugurate the Turkish Trade Center in Tehran.

Turkish businessmen had been waiting for such a forum, hoping to find lucrative opportunities in energy, petrochemicals, mining, construction, retailing, logistics and tourism as some sanctions on Iran are being lifted. DEIK issued a statement saying that the meeting could have been instrumental in increasing the volume of trade to the desired level of $30 billion in two years.

Turkish companies that had not already prepared to go to Tehran soon after the sanctions started being lifted aren't sure if they can manage their projects in Iran. None of them have pulled out, but they are taking their time to engage, worried that doing business in Iran might not be as easy as before. For example, the Iranian Civil Aviation Department has been delaying the issuance of permits for charter flights to Turkey. This began before the current tension arose, but it contributes to economic uncertainty and caused severe disappointment in Turkey’s tourism sector, which hosts an average of 1.5-2 million Iranians every year.

Organizers felt the Turkey-Iran Business Forum could have gone a long way toward facilitating trade.

It is important to understand the background of the tension between Ankara and Tehran. No doubt, Turkey is trying to find someone to blame for the disaster in Syria and for Ankara losing its influence in Iraq. Turkish officials try to explain their situation by saying they could succeed were it not for Iranian interference. But there are three other important factors.

First is Turkey’s desperate need for hot money from the Gulf to ease its shortage of market funds. Ankara hopes that by adopting an anti-Iran stance, relations with Shiite-phobic Saudi Arabia and other Gulf countries will be smoother and profitable.

Second, while looking for markets for its all-important defense industry, Turkey has noted that Gulf countries spend generously on armaments. The political masterminds in Ankara are trying to promote an exaggerated sense of the "Iranian threat" to encourage Gulf countries to buy Turkish weapons.

Turkey’s pro-Islamic daily, Yeni Safak, a virulently anti-Iran newspaper, has run headlines such as “Before missiles hit Mecca” and “Before Mecca wars begin, before tanks surround Kaaba” that reflect the Turkish government’s motivation.

Ibrahim Karagul, the daily’s editor-in-chief, wrote Feb. 16, "Though the United States and Europe largely supply the region's defense needs, and billion-dollar arms agreements are being made with these countries," Turkey's defense industry will see new opportunities, partly because of rising security threats.

"It is no longer speculation that the Gulf funds that were directed toward different sectors until now are going to create a new wave in Turkey's relations with the region," he wrote. Joint defense agreements also breed rapport, though "the situation is beyond economy for Saudi Arabia and Gulf countries like Qatar and Bahrain; these countries are under serious threat.”

He added, “There is concern about an Iranian expansion that would target the entire Arab world, which it feels no need to hide, with plans to take over Mecca. The Iranian missiles sent through Yemen to Jeddah and Riyadh have revealed Tehran's intentions."

The third factor is a desire to grab a partnership opportunity with the new US administration. Gulf countries are delighted that President Donald Trump has again made Iran a target. This is the concept Erdogan has his eyes on.