Will EU be more open to ICC probe of Israeli settlements?

Palestinians are seeing an opening to push the International Criminal Court with Europe, as anger over Donald Trump increases. 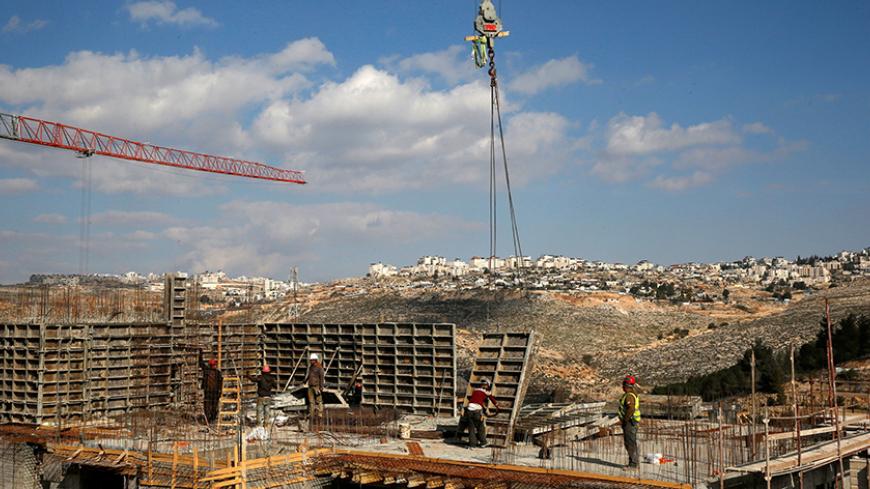 The sharp increase of Israeli settlement building since the swearing in of Donald Trump, coupled with the anger brewing in Europe over the new US president, is providing an opening for the Palestinians. Attempts to encourage the International Criminal Court (ICC) to initiate a probe into Israeli war crimes have received new life due to the rift between Washington and the European Union.

Saeb Erekat, the chief Palestinian negotiator and secretary-general of the PLO, called Jan. 30 on the ICC to immediately open a probe into what he called “immoral” Israeli actions. “The Palestinian leadership will pursue all necessary political, legal and diplomatic steps in order to hold Israel accountable and to bring justice to our people. This includes sending all the related information to the ICC urging it to open an immediate investigation into Israel's settlement enterprise,” Erekat said in a statement posted on the PLO Negotiations Affairs Department website.

After Israel’s prime minister talked by phone to the newly elected US president, the Israelis made another announcement. On Jan. 24, Israel announced its intention to build 2,500 new settlement units in the occupied West Bank. Netanyahu arrogantly said, “We’re building — and will continue to build,” in reference to the defiance of international law.

PLO Executive Committee member Hanan Ashrawi immediately responded by calling Israeli actions a war crime. “All settlements are a war crime under the Rome Statute of the ICC and constitute a direct violation of international law and conventions, including UNSC Resolution 2334,” Ashrawi said in a statement carried by the official Wafa news agency Feb. 1. The PLO official concluded, “The enormity and severity of the situation should send a strong message to the international community, including the United States and the European Union, to intervene immediately.”

While conceding that getting the ICC to act is rather complicated, Qudwa feels that this is uncharted territory. “There are three ways to trigger a formal probe by the ICC. It can be initiated by a Security Council resolution or by the ICC prosecutor — or also, a member state of the ICC can make an official request.”

Qudwa is doubtful about any of these options taking place largely because of political posturing, but he does accept that the current European anger with the Trump administration could provide an opening. “The United States has always been against the ICC, and Europe tried to ease their opposition by giving the Security Council, where the United States has a veto, a say in triggering a war crime probe,” he added.

Qudwa admits that the effort is not that simple and will certainly not be initiated if the accused party makes an effort. “We should try to trigger the ICC, but at the same time we need to be cognizant of the fact that it is not that simple.” The UN veteran said that the ICC’s response is conditional on the failure of the local government to address the issue of any potential war crime.

It is not clear if the latest effort by Palestinians will succeed in getting the ICC to initiate a probe into Israeli violations of the Geneva Conventions with its illegal building efforts.

If Democrats win in America, Israelis build; when Republicans win, Israelis are given a green light to build. If Palestinians go to Israeli courts and in rare cases receive a decision to evacuate one settlement, as in the case of Amona, Israel immediately announces its intention to build new settlements. Whether in peace or war, the Israeli settlement machine is unstoppable. No effort that could stop Israeli settlement expansion into occupied Palestinian lands has so far succeeded in stopping Israeli bulldozers.