Through a long career dedicated to the oud, Ali Hassanein has a unique perspective of the ancient and treasured Arab musical instrument. 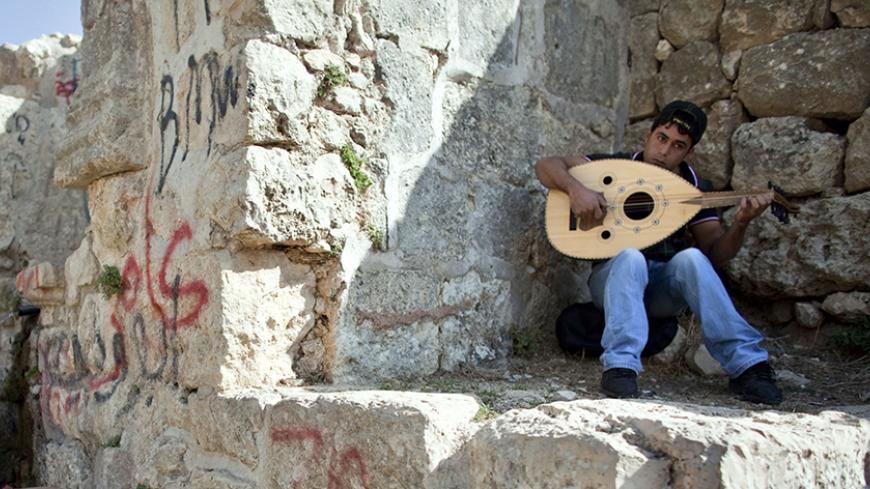 NABLUS, West Bank — In a small workshop in the old city of Nablus in the West Bank, Ali Hassanein, 56, has been busy for 60 days manufacturing an oud. Hassanein is the only oud maker in Nablus, and citizens from there and neighboring cities head to his workshop to buy ouds and have their own instruments restored and repaired.

The oud, which is also Arabic for "wood," is a pear-shaped stringed instrument. Considered one of the oldest man-made musical instruments, dating back more than 5,000 years, it is one of the most popular instruments in Middle Eastern music.

Hassanein told Al-Monitor that he started playing the oud when he was 12 years old. He was first taught by his father and went on to study with other musicians in Nablus.

When his small oud needed repair, he was unable to find anyone in the West Bank to help him fix it. He thought of traveling to get his oud fixed, but finally succeeded in doing it himself. That was when he decided to start manufacturing and fix them for others. He began manufacturing these musical instruments in 1993.

“I spent 12 years just repairing and restoring ouds before trying to manufacture one,” he said. With the encouragement of his family and friends, Hassanein traveled to several Arab countries to learn the secrets of this craft from the most famous manufacturers before returning home and opening his own workshop.

Hassanein explained that there are two main varieties of wood used to make musical instruments: cedar and spruce, which are the only types used to manufacture the oud’s soundboard, the part most important in the sound of the instrument. Hassanein imports the wood from Europe, Turkey and Egypt.

He told Al-Monitor that he imports small quantities of wood at a time, because he manufactures only five or six oud instruments per year at about 60-90 days of work for each. Hassanein knows how rare his craft is. “I am very professional at what I do. Manufacturing a musical instrument requires high precision and skills,” he said.

Pointing to the high cost of manufacturing ouds, which varies depending on the type and quality of the wood, he noted that they are sold in Palestine at a price ranging between 400-1,200 shekels ($106-$320).

In addition to his work in manufacturing and restoring ouds, Hassanein also teaches in a separate room near his workshop. He said, “A large number of people are learning oud. In the past three decades, the relationship with this instrument has grown stronger. It is not so easy for people to part with such a magnificent musical instrument as the oud.”

According to Hassanein, “This is clear from the increasing number of oud students at conservatories in Nablus and the West Bank cities.”

The Edward Said National Conservatory of Music was the first official music school in Palestine, founded in 1993. Later on, many other music schools opened across the West Bank and the Gaza Strip, most notably Al Kamandjati in Jenin.

Hassanein said that Nablus has historically had a special relationship with the oud. A majority of residents in the city once played it, especially women, who were seen as particularly gentle with the strings of the delicate instrument. “Many families in Nablus still keep and use their ancestors’ oud to this day,” he said.

Hassanein added that he benefited from the experience of European makers of musical instruments such as the famous guitar maker Christian Bertram. Though he focused on learning how to make the oud, he also learned to restore guitars and violins. He obtained various certificates in music from institutes in the West Bank.

Amal Barghouti, a 22-year-old from Nablus, is learning to play the oud and frequently visits Hassanein’s workshop. She told Al-Monitor she admires his oud-making skills, saying he offers the city a great service. She added, “The oud still preserves its authenticity in our city thanks to Hassanein, who keeps breathing life into it. He is the only one able to manufacture and restore this kind of musical instrument in the West Bank.”

Barghouti stressed the need to support Hassanein’s workshop in Nablus and encourage him to expand his work to other Palestinian cities. “He has given the oud back its ancient prestigious status,” she said.

Despite his successes, Hassanein believes he has a long way to go to fully master his art. He said he has an intimate relationship with the oud, which he considers sacred.

Cultural and musical life in Palestine is going through a kind of renaissance, with the emergence of a number of cultural centers, conservatories and numerous art festivals, most notably the Palestine International Festival, which hosts top Arab and international singers and musicians. Figures from the Palestinian Central Bureau of Statistics issued in 2015 on the occasion of Palestinian Culture Day showed that there were 596 cultural centers in the Palestinian territories, 515 of them in the West Bank and 81 in the Gaza Strip. Elective music courses and even degrees are available at many Palestinian universities, including Birzeit University, Bethlehem University, Al-Quds University and Dar Al-Kalima University College of Arts and Culture.