Is Ankara waking up to what Trump really represents?

Having vilified President Obama, President Erdogan and his supporters are realizing that ties under Trump may not turn out to be what they hope. 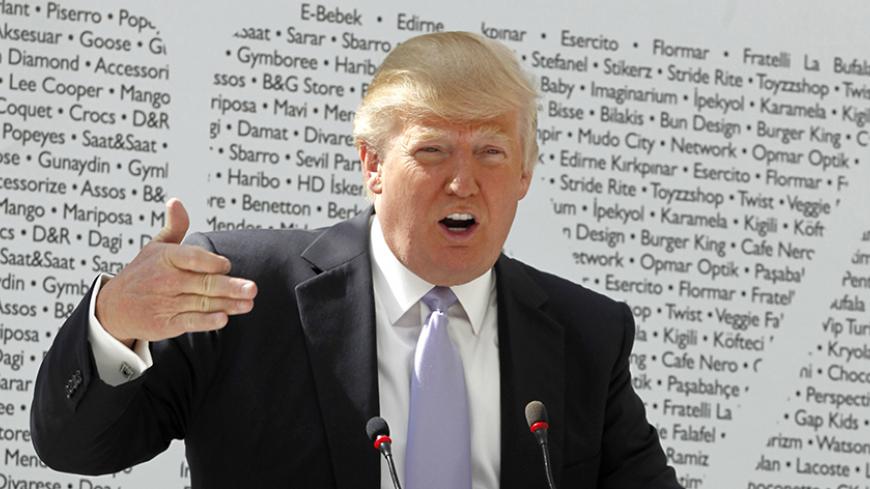 Donald Trump speaks at a news conference during the opening of the Trump Towers Mall in Istanbul, Turkey, April 20, 2012. - REUTERS/Osman Orsal

President Recep Tayyip Erdogan’s inner circle and political supporters in the media continue to vent their anger at former President Barack Obama with outlandishly exaggerated claims, while expressing hope that Turkish-US ties will be much better under President Donald Trump.

Erdogan’s foreign policy adviser Saadet Oruc, a former journalist who also writes a column in the pro-government daily Star, for example, points out that although Obama raised great expectations initially, he ended up as “one of the most unsuccessful US presidents ever.”

The Obama administration’s alleged refusal to circumvent legal restrictions and send Fethullah Gulen — the self-exiled Islamic cleric residing in Pennsylvania — packing to Turkey to answer charges that he masterminded the July 15 coup attempt, and its refusal to sever its ties with Syrian Kurdish groups Ankara considers to be terrorist organizations are the main reasons for this anger.

But signs are already emerging that the hopes invested in Trump may have also been exaggerated. Prior to departing on a three-nation tour of Africa over the weekend, Erdogan — who has signaled his keenness to work with Trump — revealed for the first time that serious doubts may be creeping into his thinking about the new US administration.

“We are waiting to see what Mr. Trump will say about the Middle East. At the moment, some language concerning the Middle East is reaching our ear, and to be frank it is disturbing,” Erdogan said, adding, “We support a Middle East where territorial integrity is respected.”

Erdogan did not elaborate, but veteran political analyst Fikret Bila — a columnist for daily Hurriyet — believes he was referring to remarks by members of Trump’s Cabinet regarding the possible division of Syria and the emergence of an independent Kurdish entity there.

Bila indicated that Ankara is also displeased that Trump had decided to keep Brett McGurk, Obama’s special envoy for the US-led coalition against the Islamic State (IS). Ankara has little love for McGurk, considering him to be a supporter of Syrian Kurds — whom Ankara considers to be terrorists.

“If Trump continues with Obama’s policy toward the Democratic Union Party [PYD] and its military wing, the People's Protection Units [YPG], and enables them as they vie for statehood, then Ankara will take a position against this, and Turkish-US ties will be even worse than ever,” Bila said.

Turkey says the YPG and the PYD — who are US allies in the fight against the Islamic State (IS) — are linked to the outlawed Kurdistan Workers Party (PKK), a characterization Washington does not accept.

Unlike Bila, Ersin Ramoglu, a columnist for pro-government daily Sabah, leaves no room for the possibility that Trump will change Washington’s positions on this issue. In an article with the telling title, “The US’s treacherous plans have not changed,” Ramoglu said the expectation that Trump will be different is tantamount to “daydreaming.”

“They are modernizing the PKK. … The US is establishing a terrorist army in the region. How did we expect Trump to be different?” Ramoglu wrote, referring to the US-YPG alliance. He maintained that “Trump will continue on Obama’s path.”

This is not the only topic ruffling Turkish feathers, though. There is also discomfort over Trump’s refusal to tone down what is seen as anti-Islamic rhetoric. Erdogan’s supporters are also displeased with him for bringing up the topic of “Islamic terrorism” in his inaugural speech.

The same applies to Trump's comments to CIA officials after his inauguration, when he referred to radical Islamic terrorism as an “evil that has to be eradicated from the face of the world.”

Obama took more notice of the Islamic world’s antipathy toward lumping the words “Islamic” and “terrorism” together. He refrained from using the term in order not to offend ordinary Muslims who do not support radical views.

As a political Islamist, Erdogan also insists that the term “Islamic terrorism” is offensive to Muslims and insulting to Islam. “Terrorism has no religion,” he argues.

Given his sensitivities as an Islamist, Erdogan’s reference to “disturbing language” from Washington probably covers a broader spectrum of concerns than just the PYD/YPG issue.

Trump’s promise to relocate the US Embassy to Jerusalem, for example, is also agitating Islamic sensitivities and upsetting Erdogan’s support base, which is staunchly pro-Palestinian, pro-Hamas and anti-Israeli.

“The main problem is whether Trump will try and honor his election promises or not. His policies toward Israel and the question of [moving] the US Embassy to Jerusalem will be key topics,” Oruc said.

In order not to undermine his expectations from the new administration, Erdogan also chose to overlook remarks by Michael T. Flynn, Trump’s national security adviser. Erdogan, as an Islamist, would have strongly castigated Flynn's words under normal circumstances.

Flynn said in August that “Islamism is a vicious cancer inside the body of 1.7 billion people,” arguing that this had to be “excised” just like fascism, imperialism and communism.

Referring to Trump’s vow to prevent Muslims from entering the US and to relocate the American Embassy, Rahim Er, a columnist for the Islamist daily Turkiye, said, “We have yet to see whether the head that wears the crown becomes sensible.”

Er said relocating the embassy to Jerusalem will result in turmoil in the region. “If Trump makes the mistake of preferring the language of radical Christianity, this will harm the US, the Middle East and the world,” Er said.

Ahmet Tasgetiren, another Islamist columnist for the Star daily, referred to the fact that Trump did not hold back from referring to Islamic terrorism “even on a historic occasion like his inauguration.” Tasgetiren also underlined Trump’s promise to relocate the US Embassy to Jerusalem.

“These are symbolic signs of evil for the Islamic world. In Turkey, there are millions of people ready to damn such initiatives by Trump. Let me put it clearly: We will not like such an America,” Tasgetiren said.

The problem for Turkey’s political Islamists is that Trump’s definition of radical Islamic groups does not tally with theirs. Erdogan, for example cherishes his ties to the Muslim Brotherhood, especially in Egypt, but Trump clearly has no sympathy for the Islamic organization.

News that the first leaders in the region Trump called as president were Israeli Prime Minister Benjamin Netanyahu and Egyptian President Abdel Fattah al-Sisi — Erdogan’s nemesis for crushing the Muslim Brotherhood — was unlikely to have gone down well in Ankara. Erdogan is still waiting for his call.

Retired Ambassador Suha Umar believes it will not take long for the differences between Trump and Erdogan to emerge. A former ambassador to Amman, Umar told Al-Monitor there is no surprise in the continuity of Washington’s long-standing Kurdish policy, which is unlikely to change fundamentally under Trump.

Umar believes Erdogan's world and Trump’s world are ultimately irreconcilable, and the former ambassador indicates that this does not portend well for ties between the two countries — especially given Trump’s proclivity for “behaving like an elephant in a china shop.”

Others may add that Erdogan’s own proclivities and abrasive manners will not help much either — especially once he has a better understanding of what Trump really represents for the region.