A family of Assyrians, one of Syria’s Christian sects, tells Al-Monitor their story of surviving imprisonment by the Islamic State only to lose their son this year to the fighting in Raqqa. 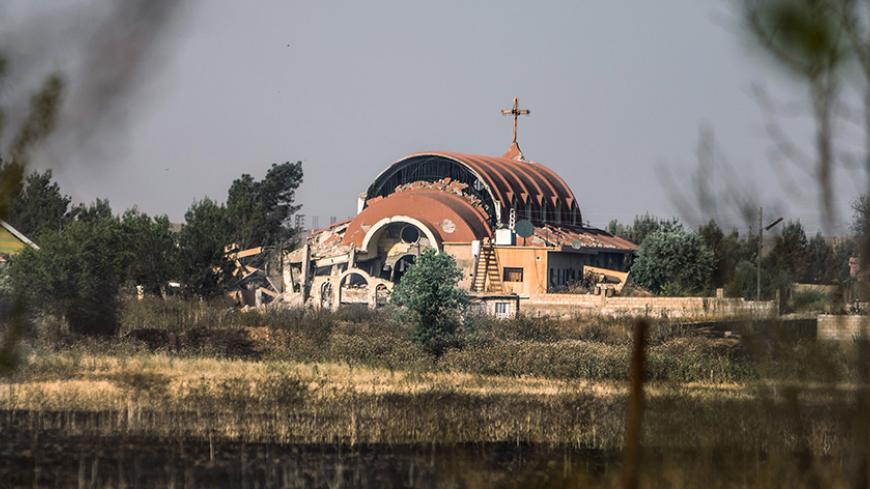 An Assyrian church is seen damaged due to what activists said was an Islamic State bomb, in Tel Nusri, Syria, May 21, 2015. - REUTERS/Rodi Said

For the second year in a row, Mariam Sarkis’ parents did not celebrate Christmas. In December 2015, their daughter was still being held by the Islamic State organization. Although she was later released, this past Christmas the parents were mourning their only son, Basil, who died Dec. 5 in clashes that erupted in the north of Raqqa. Basil, 25, fought against IS in the ranks of the Souturo forces allied with the Syrian Democratic Forces.

Mariam's family belongs to the Assyrian Christian minority. They're from the village of Tell Shamiram, about 40 kilometers (25 miles) to the northwest of the city of Hasakah in northern Syria.

Mariam and her parents were kidnapped along with 234 Assyrians during a dawn attack by IS on Feb. 23, 2015, on the predominantly Assyrian villages located on the banks of the Khabour River. Her father was held for more than five months, and her mother for nine.

Mariam, 20 years old, is thin with dark brown eyes. “A year and two months ago, when I was still kidnapped, one of the jailers came to us and shouted my mother’s name [for her to be released] but did not say mine! It was the end of the world to me,” she told Al-Monitor.

With tears in her eyes, Mariam recalled those difficult moments. As she clasped her hands, she said that first nine month that she was held, “My mother was the source of my strength, motivation and patience, and I also felt that my father was also close to me. Then I was left to cry my eyes out for days and nights by myself.”

Mariam's mother, Aklinia, was held by IS until Nov. 23, 2015, in a prison in the city of Raqqa, the organization’s main stronghold in Syria. Mariam’s father, Shamoun, was held in the men’s wing of the same facility.

After her release, Aklinia continued to wear black, fearing the return of jihadis to their region. Today, however, Aklinia is dressed in black to mourn the death of her son and express the heaviness in her heart.

“When they released me, I asked one of the emirs responsible for the prison to release my daughter. I told them she could not tolerate staying alone,” Akilinia told Al-Monitor. However, she was told that Mariam, who was eventually released on the anniversary of her capture, could only be let go when another deal was reached. In exchange for releasing each Assyrian prisoner, IS would ask the family to pay a ransom. The Assyrian Church in Syria, based in Hasakah, oversaw the deals.

Mariam’s father was released Aug. 11, 2015. He told Al-Monitor that every 15 days, IS leaders would send a sheikh to call on the prisoners to convert to Islam.

“They did not force anyone to convert to Islam. The sheikh would assure us that there is no compulsion in religion and that we were receiving special treatment because we were 'people of the book.'”

Mariam said, “I was deprived of my freedom, and I missed seeing the sun and smelling fresh air. On Sundays, I had a strong desire to go to church, but I would secretly pray with the other detained women and girls and silently hold some rituals.”

Upon her release, Aklinia was shocked to hear from her husband that IS had set fire to their church and their house along with many other houses in the village of Tell Shamiram. “I haven’t been to the village yet. I cannot stand seeing our house reduced to ashes. They burned all our memories. They set our church ablaze. They did not spare a thing,” she said bitterly.

The family is staying in Tell Tamer, quite close to Tell Shamiran. But Shamoun said that his family has decided to leave the country. “We suffered a lot here. We went through kidnappings, imprisonment and arson. On top of it all, we lost our only son, so we will go to a country where we can find security away from these wars and conflicts.”

This past Christmas in the predominantly Christian town of Tell Tamer seemed a luxury the town could not afford. The streets and alleys of the town were completely silent and most of the shops were closed. Most of the Assyrians have emigrated to Western countries.

Sulaiman Yousuf, a writer on religious minority affairs, told Al-Monitor that the IS attack two years ago on Tell Tamer led to the displacement of about 30,000 Assyrians from the area. “Frustration and fear of the unknown prompted a lot of Assyrians to leave their villages and emigrate,” he noted.

Yousuf accused the Syrian regime of failing to protect Syria's Assyrians, Chaldeans and Christians. He said the regime “left them to fall prey to the jihadi organizations to put pressure on and intimidate the Assyrians into supporting him and letting him be seen as a protector of minorities.”

He added, “The Syrian army that is deployed in the city of Hasakah remained idle and did not intervene in repelling the attack. Even the international coalition against IS let them down and failed to protect them,” he added.

Yousuf warned against the migration of Assyrians, Chaldeans and Christians. “This will leave the East devoid of Christians, Yazidis or [other] minorities as they leave their home countries to look for alternative homelands that provide them with security, stability and a good future.”

The number of Assyrians was an estimated 1 million people out of 2 million Christians in Syria before 2011. This number has significantly dropped as a third of them have left the country and headed to Lebanon to escape the raging war. From there, most of them have traveled to European and other Western countries.