Iranians call for resignation of Tehran mayor over high-rise collapse

The collapse of Iran’s oldest high-rise following a fire leads to calls for the resignation of Tehran’s mayor. 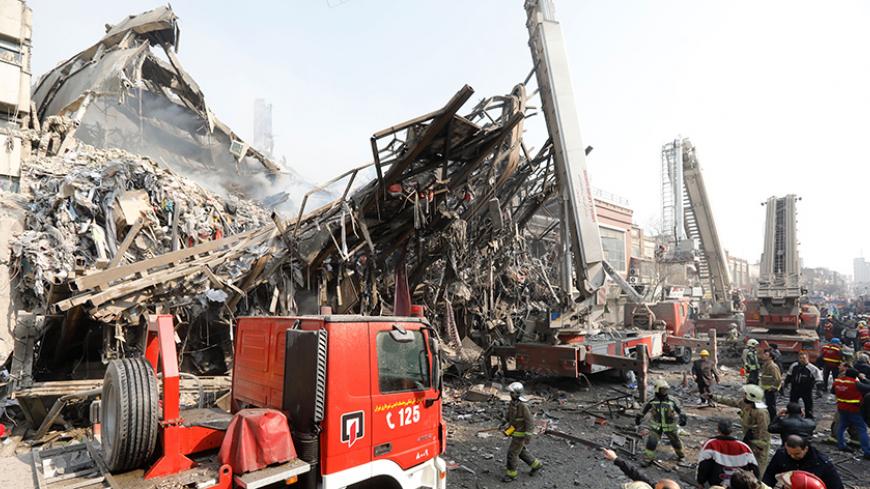 The steel structure of Iran's oldest high-rise, the 17-story Plasco building, is seen after the collapse of the building in downtown Tehran, Jan. 19, 2017. - STR/AFP/Getty Images

Iranians are outraged and saddened by the destruction of the country's oldest high-rise, the Plasco building, which collapsed Jan. 19 after being engulfed by fire. The 17-story structure, completed in 1962, was the center of clothing production in Tehran. The presence of textiles may have led to the rapid spread of the flames along with building managers' having ignored repeated warnings about the lack of adherence to fire safety regulations. Many Iranians are calling for the resignation of Tehran Mayor Mohammad Bagher Ghalibaf for mismanagement.

The Plasco, located downtown on Jomhuri Street, stood around the corner from the British Embassy and the main foreign exchange offices on Ferdowsi Street. Sasan Aghaei, a journalist with the Reformist daily Etemaad, tweeted, “Plasco is one of the symbols of Iran taking steps toward modernization and industrialization. Today, one of the symbols of Tehran collapsed.”

The fire at the Plasco reportedly began at 7:59 a.m., leading to the dispatch of 200 firefighters, who had success battling the devastating blaze. Journalists rushed to report on the fire, which was also recorded on camera, including by Iranian state TV, which carried live coverage of the fire and the building's collapse at 11:15.

Iranian news agencies have reported that a number of firefighters are trapped under the debris and that scores are feared to have been killed. The official Islamic Republic News Agency has reported 50 dead, but city officials have not confirmed the figure.

A large number of people gathered at the Plasco amid the devastation to take pictures and selfies of the embittering incident, angering the media and activists on social media networks.

“Mamlekate,” a famous Telegram channel, published a short text, asking people to stay away from the Plasco. “People shouldn’t go to the scene, and those whose workplace is there should leave so that the rescue workers can do their job with full concentration.” Noting an image of people taking pictures of the collapsed building, a Twitter user named Zara tweeted, “This picture angered me very much; the love of cellphones and recording has gone too far.” Meanwhile, other Iranians queued in long lines to donate blood for the victims.

As the top floors of the Plasco burned, Ghalibaf was in the holy city of Qom, the base of influential clerics some 80 miles south of the capital. He quickly returned to Tehran upon receiving news of developments.

Many on social media perceived Ghalibaf’s Qom visit as a part of his widely anticipated bid for the presidency in May elections, slamming him for his “electoral goals.” In light of the blaze, calls also went out for his resignation, with the hashtag “Ghalibaf_resign” (in Persian) quickly appearing on social media.

Zahra Safyari sarcastically tweeted, “Dr. Qalibaf, we are thankful that you left your electoral trip unfinished and returned [to Tehran]. #Ghalibaf_resign.” Adagio tweeted, “Demanding the resignation of an underserving executive whose mismanagement has caused the death of a large number of our countrymen is a humane move and not political exploitation.”

Amid the outrage was an outpouring of support for the firefighters, with expressions of hope for the survival of those trapped under the debris. Twitter user Houshmandii published a picture of a firefighter with the caption, “Being a firefighter is not a job, it is love.” Soheil posted on his Twitter account, “We surely belong to Allah and to Him we shall return,” the Quranic verse (2:156) recited upon a death. He added, “Happy martyrdom, devoted firemen.”

Nahid Molavi, a journalist at Etemaad, tweeted, “When the firefighting equipment is rudimentary while the [Tehran] municipality is among the most high-income institutions, questioning Ghalibaf is not political exploitation [of the tragedy].”

An article on Asr-e-Iran, a moderate news website, criticized the lack of attention to old buildings, with the author stating, “The Plasco fire caused me to think about how many buildings like Plasco there are in Tehran and other cities. How many more times could these [kinds of] events occur? How many more times should firemen and people become the victims of such a default [situation]?”

In this vein, Reformist Shargh Daily quoted one of the firefighters at the scene as angrily shouting, “Plasco is not the only weak building. Half of Tehran’s buildings are in danger. We shout, but nobody listens.”