British Prime Minister Theresa May is expected to urge Donald Trump not to mess with the nuclear deal after delivering the same message to congressional Republicans. 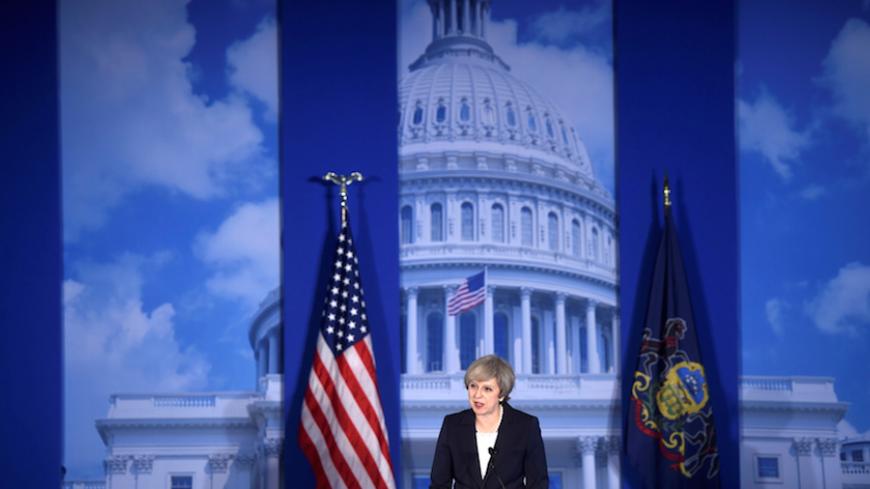 British Prime Minister Theresa May is expected to urge US President Donald Trump not to mess with the Iran nuclear deal when she meets with him Jan. 27, a rare piece of good news for the pact’s embattled supporters.

Trump throughout the campaign vowed to renegotiate what he’s called “the worst deal ever.” But he’s also eager to strike a good relationship with May, a key potential ally as the new US administration reorders its traditional alliances in favor of closer bilateral ties with like-minded countries.

"We have been a strong supporter of the deal,” a British official told Al-Monitor ahead of May’s visit, “and would expect the prime minister to be clear about that during her visit to the US.”

The prime minister already delivered that message to congressional Republicans when she addressed their annual retreat in Philadelphia on Jan. 26. After vowing to counter what she called Iran’s “malign influence” and “aggressive efforts to build an arc of influence from Tehran through to the Mediterranean,” she defended the deal before a roomful of Republicans who voted against it.

“The nuclear deal with Iran is controversial,” she acknowledged. “But it has neutralized the possibility of the Iranians' acquiring nuclear weapons for more than a decade. It has seen Iran remove 13,000 centrifuges, together with associated infrastructure, and eliminate its stock of 20% enriched uranium.”

“That was vitally important for regional security,” May went on. “But the agreement must now be very carefully and rigorously policed. And any breaches should be dealt with firmly and immediately.”

Having May be Trump’s first face-to-face encounter with a foreign leader since his election could prove vital, the deal’s defenders argue. Trump is expected to meet with Israeli Prime Minister Benjamin Netanyahu, a vocal opponent of the agreement, early next month.

“To have Trump‘s first meeting with a foreign leader be one that reinforces the deal is really important,” said Jamal Abdi, the policy director at the pro-deal National Iranian American Council. “It demonstrates that there’s really not a debate about this deal except in this administration, apparently, and within the leadership in Israel.”

Abdi said the timing of May’s visit is especially welcome because of what he sees as a raft of worrying signs since Trump’s election. These include “ambiguous” comments from Trump himself, as well as hard-line positions from some of his advisers, such as Iran’s inclusion in a list of countries for which admission into the United States would be suspended for 30 days under draft visa regulations.

That pending order would further require the designated foreign nations to “provide” the information needed to determine that visa seekers are who they claim to be and are not “a security or public-safety threat.” Abdi said that could spark a “diplomatic confrontation” with Iran, which still does not have formal diplomatic relations with the United States.

“That looks like ripe terrain for another standoff between our countries,” Abdi said. “[The deal] could unravel more quickly than we thought, so any news like [May’s visit] is good news.”

Already, Republicans in Congress have introduced a raft of bills that could harm the deal before Trump even has a team — much less a policy — in place. These include efforts from Sen. Marco Rubio, R-Fla., to impose non-nuclear sanctions on Iran.

“After years of unilateral concessions and flexibility by the previous administration, it’s time for the United States to push back against Iran’s support for terrorism, the regime’s menacing ballistic missile activities and its egregious human rights violations,” Rubio said in a statement this week. “I look forward to working with the new administration to hold Iran fully accountable for both its non-nuclear and nuclear threats.”

Rather than tear up the deal, Abdi said the Trump administration may be more likely to try to take Iranian cheating allegations before the UN Security Council. He argued that May is uniquely well-positioned to “reinforce that the US is going to be isolated if they take that approach” unless the evidence against Iran is overwhelming.