Is Turkey at the end of its EU adventure?

The European Parliament’s call to freeze membership talks with Turkey may not be binding for EU leaders, but still marks a grim milestone with far-reaching political and economic implications for Turkey. 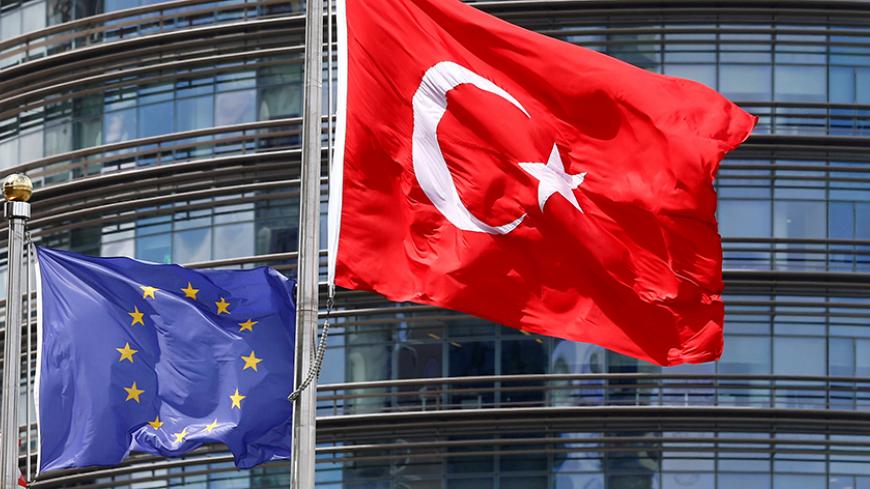 A European Union flag (L) and a Turkish flag fly outside a hotel in Istanbul, Turkey, May 4, 2016. - REUTERS/Murad Sezer/File Photo

The European Parliament has voted overwhelmingly in favor of freezing Turkey’s European Union accession talks, citing numerous examples of Ankara’s “disproportionate” and “repressive” measures under the state of emergency.

Specifically, the group noted Turkey's breaches of basic rights and freedoms, “severe restrictions” on freedom of expression and the media, the arrest of 10 Kurdish lawmakers and some 150 journalists, President Recep Tayyip Erdogan’s stance in favor of reinstating the death penalty and “statements disputing the Treaty of Lausanne, which defines the borders of modern Turkey and has contributed to safeguarding peace and stability in the region for almost a century.”

No doubt, those are all realistic observations. The question now is: How will the resolution bear on EU-Turkey relations and what will the consequences be?

The Nov. 24 resolution is not a binding one, but rather a recommendation to EU leaders, who are scheduled to meet Dec. 15-16 in Brussels. The summit is not expected to result in a decision to suspend Turkey’s accession talks, yet how exactly the vote will impact the balance remains unclear. European Commission President Jean-Claude Juncker has warned Ankara against underestimating the vote because, although not binding, “It will produce effects in the capitals” of EU states.

The Turkish government, however, has not only played down the resolution, but adopted a defiant stance, making the issue a tool in domestic politics. Shortly after the vote, Minister of EU Affairs Omer Celik called the resolution “null and void,” while Prime Minister Binali Yildirim said it had “no importance” for Ankara. Then Erdogan stepped in, drawing a bargaining link with the refugee deal that Turkey had struck with the EU in March. “If you go any further, the border gates will be opened,” Erdogan said, threatening to unleash a new wave of refugees on Europe. Given Europe’s need for Turkish cooperation to curb the influx of refugees, the threat is not groundless. Yet the EU has certain principles and balances, which means that interest-based bargaining could be possible only for a certain period of time and under certain conditions.

European Parliament resolutions are important because they reflect prevailing political sentiments in Europe and even serve as a harbinger of the course of events. Thus, the Nov. 24 vote carries symbolic significance in terms of EU principles, values and ties with Turkey. The vote is important for Turkey, no matter how much Turkish leaders try to ignore it. And in the context of Turkish democracy, its importance is not only symbolic but very much tangible and even alarming. Why?

Twelve years have passed since December 2004, when the European Parliament convened in an exactly opposite climate with an exactly opposite sentiment to approve overwhelmingly a resolution urging the start of accession talks with Turkey “without undue delay.” Much of those 12 years saw a Turkey devoted to reform. The EU played a crucial role in the country’s democratic, economic and political progress until the 2010-2011 period.

In terms of democracy, the EU provided Ankara with tailwinds for constitutional and legal amendments, a relative demilitarization process, the expansion of basic rights and religious, cultural and political freedoms, and efforts to seek a political settlement to the Kurdish question. Ankara’s adoption and application of the EU’s Copenhagen criteria meant a parallel course of remarkable democratization.

In terms of economy, the membership talks became a major stability factor and growth booster for the Turkish economy. In the words of prominent Turkish economist Seyfettin Gursel, “Starting in 2005, foreign direct investments increased five of six times, exceeding $15 billion. … Let’s note that 75% of foreign investments came from Europe. This is a huge boon for an economy with a big savings deficit and therefore an external deficit, because it contributes to financing the external deficit without increasing the external debt, supports investment and provides technology transfer.”

He continued, "Moreover, as the negotiations advanced and the Turkish legal system aligned with European legal norms, the process [was] seen as the guarantee of a democratic system and a functioning market economy. It was thanks to this guarantee that local banks and companies were able to easily borrow from the international market thus far.”

In political terms, the EU precipitated a big political split within Turkey’s Islamic tradition. Erdogan and his Justice and Development Party moved away from narratives and policies that were unwelcoming to the West and portrayed the EU as a “Christian club.” Though this course stemmed from identity and existential needs, it activated a drive to reconcile religious, national and local values with universal ones. As a result, Turkey won for some time the title of a “model country” demonstrating that Islam and democracy could coexist. This was a trend that blocked radical Islamist movements and had a special significance for both Europe and the Muslim world, beyond Turkey. The EU-Turkey relationship nurtured anticipation, prospects or dreams of building a bridge between West and East, between the Christian and Muslim civilizations, especially the Middle Eastern countries in Turkey’s neighborhood.

No doubt, the collapse of this dream and the severe damage inflicted on the sole bridge of hope was not caused only by Erdogan’s authoritarian shift. The violence waves, security-centered policies and introversion trend have stemmed from various sources from West to East. Still, Turkey holds one major individual responsibility, which is its shift away from both the EU and its norms and Turkey’s own endeavor to synthesize Western and Eastern values.

That Turkey has entered a course of regress from the gains it had made with the EU is plain as day. The toll of what is already lost and will be lost in the future includes democratic, economic and political gains alike.

And here lies the two-pronged significance of the European Parliament’s vote. The resolution represents a critical threshold in the “rupture” in Turkey-EU ties, which has been debated for some time. Apart from recommending the suspension of membership talks, the resolution’s impact in the EU and Turkey seems bound to further erode Turkey’s weakening bonds with democratic values and a market economy. This is already evidenced by Ankara’s serious breaches of basic rights and freedoms, a trend toward a single-party state, foreign capital flights from Turkey, the free fall of the Turkish lira and inclinations toward economic introversion. The bells seem to be tolling for Turkey.