Like dozens of Kurdish media outlets, local administrations and civic groups, a charity helping some of Turkey’s poorest Kurds has fallen victim to Ankara’s post-coup crackdown. 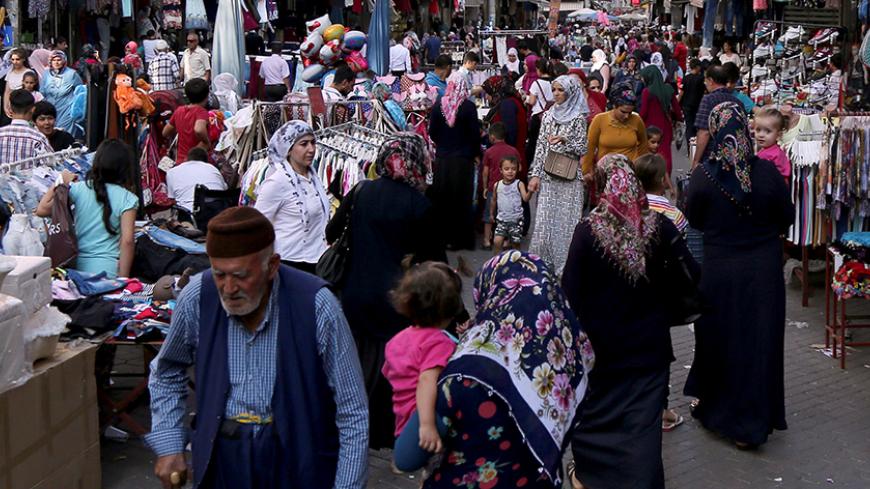 People shop at an open-air bazaar in the Baglar neighborhood of the Kurdish-dominated southeastern city of Diyarbakir, Turkey, Sept. 5, 2016.

DIYARBAKIR, Turkey — Every day for the past 11 years, hundreds of people flock to a modest, one-story building in Diyarbakir’s Kayapinar district that bears the sign “Foodbank.” The poorest of the poor in this mainly Kurdish city wait in long lines and return home with food packages — their only means of survival.

Since late November, however, visitors have been returning empty-handed, like the two women who, on a recent morning, were shocked to find the gate of the premises locked. Their confusion grew as they noticed that the door of the building was sealed as well. As they left with tear-filled eyes, another woman arrived, only to hear the same explanation from an aid worker standing at the gate: The Sarmasik Association, which operated the foodbank, was shut down under the Turkish government’s latest legislative decree, issued Nov. 22 as part of the state of emergency since the July 15 coup attempt.

The decree ordered the closure of 550 associations, 19 private medical centers and nine media outlets for “links with terrorist organizations or entities and groups, which the National Security Council has determined to be involved in activities against the national security of the state.”

Various organizations and individuals from Diyarbakir had joined hands in 2005 to create the Sarmasik Association as a charity to support families with no regular income, providing them with food as well as assistance for health care and education. Though the association faced a number of investigations, it was never penalized and it grew into a respected charity. Even lawmakers from the ruling Justice and Development Party paid visits to Sarmasik, and government officials in the city lauded its work.

But as the political climate in Turkey changed, so did the official view of the association. First, it ended up on a list of hundreds of associations whose activities were banned for three months in early November; soon the permanent closure decision followed.

Esra Simsek, a divorced mother of two in her early 40s, used to be one of Sarmasik’s beneficiaries. Unable to work due to a chronic disease, she received food aid as well as education assistance for her two daughters from the charity. The closure of the association has left her desperate and distressed.

“They used to give us food and scholarships for the children. They were a blessing for us. Thousands of people are victimized now,” she told Al-Monitor in her two-room shanty house. “There are many single women who are so miserable, with no money to buy even food. Thanks to [Sarmasik], those people were able to have food at least. The closure has been a great misfortune,” she added. Asked what she would do now, Simsek said she would try to sell homemade dumplings and stuffed meatballs.

After Sarmasik’s closure, 32,000 destitute people like Simsek, who received monthly food packages from the association, are now left on their own, according to the charity’s board chairman, Serif Camci. “Our association supported families living at the hunger threshold, without a penny of regular income,” he told Al-Monitor. Those 5,400 households, he said, were the neediest, so much so that “even if you thought of teaching them to fish instead of giving them a fish, there was no one to teach.”

Without food assistance of at least one meal per day, “they risk going to bed hungry,” Camci said. “They would sometimes receive aid from others, but what made Sarmasik different was that it provided assistance on a regular basis.”

The closure order, he stressed, “is a severe move that seals not only a building but the stomachs of 32,000 people. This is unacceptable. No human reason can accept this.”

Food items worth some 500,000 Turkish lira ($145,000) remain locked in the charity’s depots. The authorities have banned their removal as well. Charity workers worry that the food will go bad instead of being distributed as one last assistance to people in need.

Asked about Sarmasik’s alleged links with the PKK, Camci described the closure as devoid of “any sensible justification.” The association, he stressed, had undergone a number of investigations, but all resulted in decisions of nonprosecution. “All founders had faced probes, but all were cleared. Inspectors came over many times, and their audit reports are out there to see. There was no activity outside the stated purpose,” he added.

Like many others in the Kurdish community, Sarmasik’s board members were certainly people with political convictions that the government may have disliked. Yet the association itself had never drawn attention with any political activity. It was only known as a door of hope for thousands of impoverished people in Diyarbakir. This door is now sealed. Whether the managers had committed any crime or not remains unknown, for the closure order was not based on any investigation. Whoever commits a crime should be liable to punishment. Instead, the whole association was banned. Who was really punished — the association or the poor?