As the first suspects go to trial in connection with the July coup attempt, a deeply wounded and divided Turkey does not appear ready for closure. 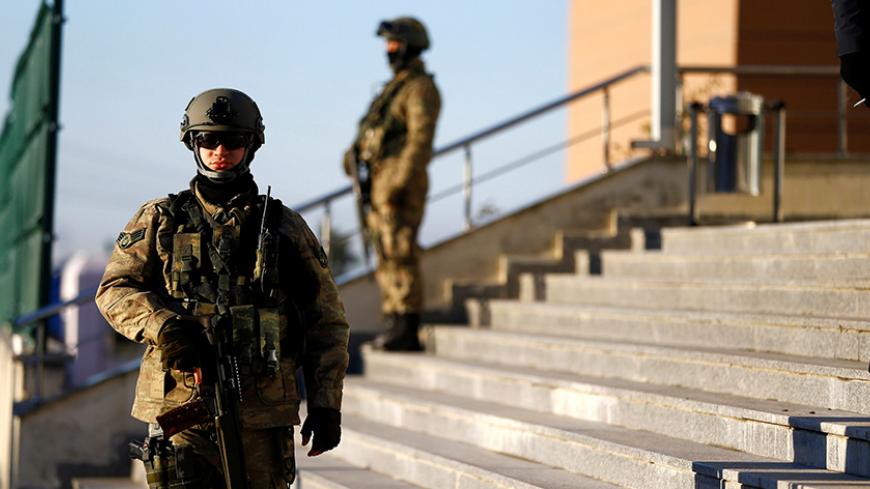 A Turkish soldier stands guard outside the Silivri prison and courthouse complex during the first trial related to Turkey's failed coup, in Istanbul, Dec. 27, 2016. - REUTERS/Osman Orsal

The trial of 29 police officers accused of supporting the failed coup attempt in July started in Istanbul’s Silivri courthouse and penal complex on Dec. 27. The officers are charged with not relaying orders from the General Directorate of Security (Turkey’s national police department) to their colleagues and subordinates to resist the uprising as well as ignoring direct orders from Istanbul Police Chief Mustafa Caliskan to not turn over their weapons to the soldiers. Turkish police along with military forces loyal to the government had played a critical role in thwarting the coup attempt.

Not surprisingly, the 29 officers are also accused of being part of a clandestine network allegedly run by the Pennsylvania-based Turkish preacher Fethullah Gulen that the Turkish government and Turks across the political spectrum derisively refer to as the Fethullah Gulen Terror Organization or FETO. Many Turks think Gulen masterminded the coup attempt.

Because this is the first prosecution of suspected Gulenists that were purged from their jobs, the prosecution, the ruling Justice and Development Party (AKP) and its supporters are making a point of showing that the trial is free and fair. Mehmet Sari, the president of the Turkish Lawyers’ Association, who is acting as a non-party intervener in the case, told reporters outside the Silivri complex that it was “necessary to give the impression that the trial is conducted justly and impartially.” Sari attested that today’s proceedings, in which both the defendants and their lawyers had their say in court, proved that “the right of defense was respected and the trial took place in an independent manner.” However, as several Al-Monitor writers have pointed out in the past months, the AKP government’s decision to fire tens of thousands of civil servants and pressure private companies to either close down or fire employees for suspected ties to Gulen are creating deep social divisions and mass public trauma.

Meanwhile, there has been another interesting development in the Turkish legal system. A group of lawyers submitted a criminal complaint to the Istanbul prosecutor’s office against Syrian President Bashar al-Assad. Pro-government daily Yeni Akit reported that the group accused Assad and his chain of command of “genocide, war crimes, crimes against humanity, homicide, deliberate injury, denying rights and liberties, torture and sexual assault,” and claimed that Turkey has “universal jurisdiction” over the case.

In the wake of Turkey’s rapprochement with Israel, the AKP government had offended its base by dropping all charges against Israeli military officers for Israeli troops’ killing of nine Turkish nationals on the Mavi Marmara flotilla in May 2010. While the AKP base may have lost that round, it does not yet seem reconciled with the idea of Turkey reaching some sort of understanding with Russia and the Assad regime in Syria.

In other news, the proposed constitutional amendments that would create President Recep Tayyip Erdogan’s long-sought “executive presidency” are creating a row between the ruling party AKP and the opposition. AKP deputy and member of the party executive committee Burhan Kuzu recently told Yeni Akit that polls show as much as 61% of the public supports the proposed changes.

Opposition media outlets such as BirGun and Cumhuriyet, however, beg to differ. Pointing out the AKP’s attempts to stifle parliamentary debate on the amendments, BirGun warned the ruling party could use dubious methods to pass the changes, such as forcing Turkey’s Constitutional Court to establish a precedent that would enable it to ignore the Turkish Constitution’s provisions on amendments. Currently, amendments need 367 votes to pass, and 330 to be taken to a popular referendum. Cumhuriyet, for its part, cited members of the main opposition Republican People’s Party as saying that the AKP’s bet on its 317 deputies, together with the Nationalist Action Party’s 39, being more than enough to reach 330 “was far from certain.” A procedural defeat in parliament would indeed be a huge blow to the AKP, but it would also worsen political polarization in Turkey.