Turkey gripped by terror as Russian ambassador killed in Ankara

Turkish media outlets are scrambling to cover the killing of Russia's ambassador to Turkey, a break from their calls to attack the Kurdistan Workers Party's bases in response to the suicide attack that killed 13 Turkish conscripts on leave in the central Anatolian town of Kayseri. 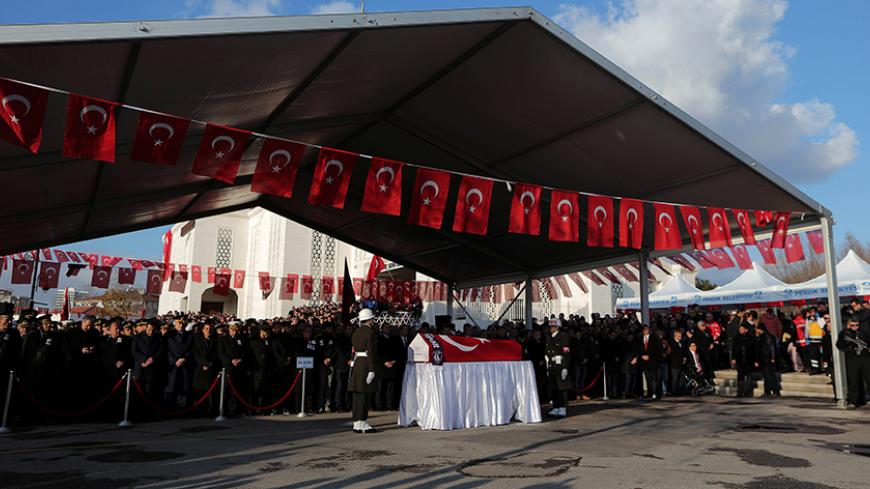 People gather behind the flag-wrapped coffin of Turkish soldier Goksel Mustafa Agacyetistiren, who was killed in Saturday's blasts in Kayseri, during the funeral ceremony in Istanbul, Dec. 18, 2016. - REUTERS/Huseyin Alldem

A suicide bomber struck a bus full of Turkish army conscripts on leave in the central Anatolian town of Kayseri on Dec. 17, killing 13 and wounding more than 50. The attack, allegedly perpetrated by the Kurdistan Freedom Falcons (TAK), an offshoot of the Kurdistan Workers Party (PKK), comes in the wake of the dual suicide bombings on Dec. 10 that targeted riot police outside a soccer game in Istanbul. TAK claimed responsibility for the Istanbul attack that killed 36 officers and eight civilians.

While these tragic events have worsened tensions in Turkey, many observers emphasized the symbolic value of attacking unarmed troops from the 1st Commando Brigade. Some media outlets referred to the brigade, also known as “Kayseri Hava Indirme” (Kayseri Airborne), as “the PKK’s nightmare” for its role in fighting the militant Kurdish group. Kayseri Airborne’s sister unit, the Hakkari Mountain and Commando Brigade on the Iraqi border, also serves as a vanguard in the front lines of the Turkish state’s decadeslong struggle against the PKK.

Meanwhile, many Turkish media outlets underscored that the Kayseri attacker had received “military training” and snuck into Turkey from the Syrian Kurdish town of Kobani, controlled by the Democratic Union Party (PYD), which the Turks accuse of aiding the PKK.

The English edition of the Sabah newspaper, which is close to the Turkish government, specifically emphasized how the bomber had received training at camps run by the PYD. Today’s front page of pro-government Yeni Akit ran the sensational headline “The swamp in Qandil should be drained,” referring to the PKK’s various bases in the Qandil Mountains in Iraqi Kurdistan.

Turkish news outlets, however, overlooked a critical aspect of the story. Groups such as the PYD, PKK and TAK often emphasize the retaliatory nature of attacks like the ones in Istanbul and Kayseri. As several Al-Monitor writers have pointed out in recent months (including Kadri Gursel, who is currently in pretrial detention for his journalistic work), militant Kurdish groups often attack “softer” targets in western Turkey instead of directly confronting security forces. The PKK and TAK legitimize their attacks against civilians or security forces in western Turkey as a way to avenge the Turkish government’s heavy-handed operations in the country’s predominantly Kurdish southeast. In turn, the government’s vengeful responses after PKK and TAK strikes worsen the vicious cycle of violence in Turkey.

In other news, as this article went to publication, reports came in that Andrei Karlov, Russia’s ambassador to Turkey, had been shot and killed by a Turkish police officer at an art opening in the Turkish capital Ankara. Observers as diverse as Iranian-American scholar Trita Parsi, neoconservative pundit Bill Kristol and Al-Monitor’s own Laura Rozen compared the episode to the assassination of Austrian Archduke Franz Ferdinand in Sarajevo in June 1914, an event that triggered World War I.

The attacks in Istanbul, Kayseri and now Ankara prove that without a Christmas (or New Year) miracle, 2017 is poised to be even more unpleasant than 2016 for Turks. At the moment, Turkey looks helpless.