Why this Palestinian university is offering Turkish language courses

Al-Quds University is the first Palestinian university to offer Turkish language courses to its students, in an effort to promote cooperation between the two countries. 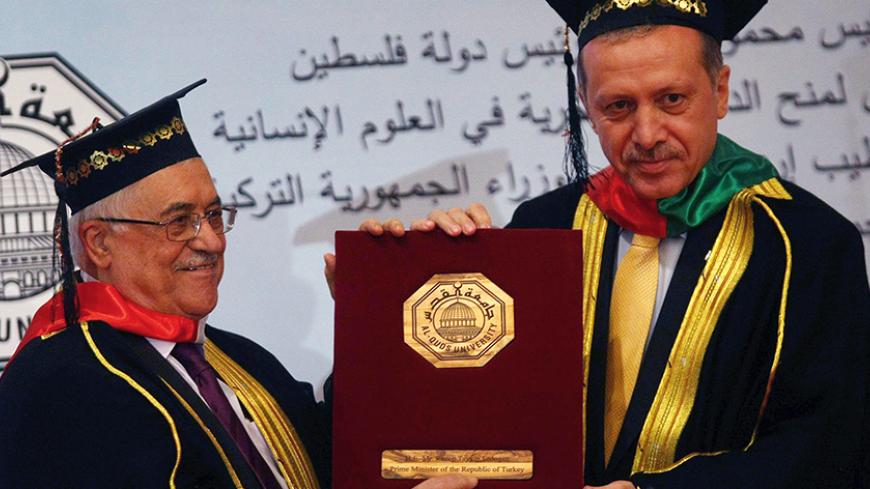 GAZA CITY, Gaza Strip — Al-Quds University in Abu Dis, near Jerusalem, has signed a protocol of cooperation with the Turkish Institute of Yunus Emre to start teaching Turkish at the university. Based on the Nov. 13 agreement, qualified teachers will offer courses on the Turkish language, culture, history and arts. The two institutions will also conduct joint research.

Al-Quds University is among 45 institutions around the world to partner with the Turkish Yunus Emre Institute. Notably, the university granted Turkish leader Recep Tayyip Erdogan an honorary doctorate in 2012 in recognition of his support for the Palestinian cause.

Rajaa Yousef, a 21-year-old student at Al-Quds University, told Al-Monitor that the opportunity to learn Turkish is a chance to learn about other cultures. She added that Turkish would come in handy should she decide to finish her postgraduate studies at a Turkish university.

Ramez al-Khatib, another Al-Quds student, told Al-Monitor that many universities around the world started teaching the Turkish language after the Turkish renaissance under Erdogan, stressing that the Turkish course in Jerusalem will attract high enrollment.

“We currently teach English, Italian and French at the university, and we look forward to deepening our relationship with Turkey through the teaching of their language,” he said. Dweik expects other Palestinian universities to follow suit, as many Palestinian students enroll at Al-Quds University with funding from the Turkish government’s scholarship program for Palestinian students at home and abroad.

There are 10 Turkish students currently enrolled in Al-Quds University, according to Dweik, as part of an exchange program with EU funding. The EU offers its support to education and technical and scientific training in Palestine as a way to develop education and training centers and increase their efficiency. On Dec. 10, 2015, the EU launched a four-year project that offers training programs in Palestine in cooperation with the ministries of labor and higher education.

Dweik pointed out that the Turkish language course, an elective, will be divided into beginner and advanced levels. He said it will prepare students for “when they travel to study in Turkish universities.”

Anwar Zakaria, the assistant undersecretary for higher education in Palestine, said he is very supportive of foreign language education in Palestine. Zakaria told Al-Monitor that language courses are primarily intended not to support the labor market but to strengthen Palestinian relations and ties with foreign countries. He added, “I wish every university in Palestine could start teaching foreign languages. We need to strengthen relations with the countries of the world.”

In a working paper submitted during a conference on promoting cooperation between Palestinian universities and the private sector held on Sept. 13, 2015, the Palestinian Ministry of Labor confirmed the widening gap between university graduates and the labor market. It also stated that some graduates are worried about rising unemployment rates, especially since some academic specializations are now flooding the Palestinian market.

Nashwan said that the labor market requires knowledge of languages other than Arabic due to the presence of many international and regional companies in Palestine such as banks, telecommunications companies, insurance companies and international accounting companies.

“It is normal for a Turkish company looking to invest in Palestine to require a link" to Palestine, Nashwan added. "And that link can be the university graduate who speaks foreign languages.”

Nashwan explained that Palestine needs to strengthen its links with Turkey to take advantage of the economic boom the country is experiencing. He noted that Turkish investments strengthen the value of investment in Palestine and and create more job opportunities for Palestinians.

The Turkish language courses at Al-Quds University will undoubtedly lead other Palestinian universities to follow the trend. Palestine can expect to see increasing academic openness to foreign cultures and languages​​.