Why does Rouhani suddenly want to 'rename' Iran’s currency?

The Hassan Rouhani administration’s push for currency reform is being met with criticism as economists say the Iranian economy is not yet ready to handle the potential dangers of a redenomination. 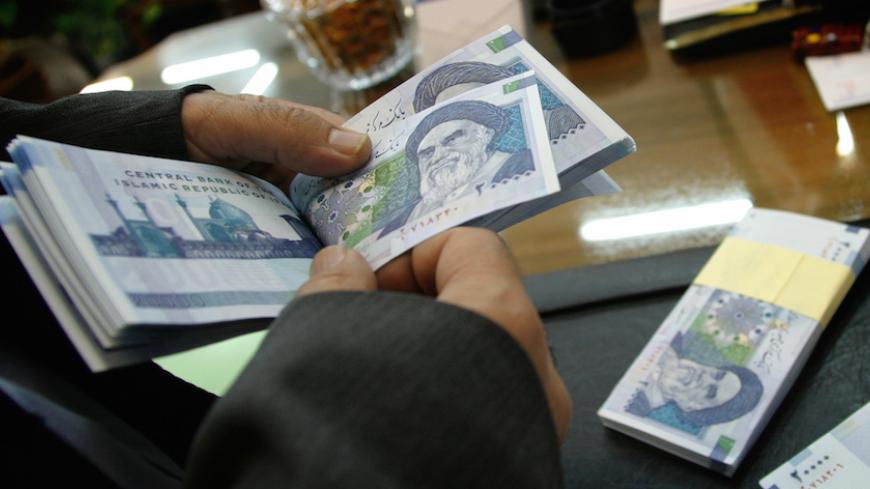 The Iranian government’s passing of a bill on Dec. 7 to change the national currency unit from the rial to the toman — equivalent to 10 rials — has triggered charges that the administration had not thoroughly studied the measure. The bill needs to be ratified by parliament and then approved by the Guardian Council to go into effect.

Despite the government’s insistence that the move was only a “name change,” a majority of economists in Tehran argue that the change to the national currency is considered redenomination, for which the Iranian economy is not yet ready.

Conservative news site Tabnak argued Dec. 8 that to be effective, the proposed currency reform must be combined with tight fiscal discipline and a contractionary policy for the coming Iranian fiscal year (beginning March 21, 2017) — none of which seems to have been considered in the government’s proposed budget bill. The publication further warned that curbing inflation, which has been the major target of monetary policy in the past three years, will not be enough for the proposed reform to maintain a positive impact.

The Central Bank of Iran, however, has stated that the effort to remove one should not be confused with redenomination, a process of eliminating several zeros from the national currency.

“The bank only intends to officially recognize a common practice already used in society,” CBI Governor Valiollah Seif wrote on Telegram Dec. 8, referring to the fact that the toman has widely been used in Iran for years. He insisted in his message that if ratified, the bill will have no “psychological or inflationary effects.”

The Iranian currency has lost significant value since the 1979 Islamic Revolution, largely due to galloping inflation. While the dollar traded for 70 rials prior to the revolution, it currently fetches some 32,000 rials. Thus, for convenience, ordinary Iranians have long been using the toman rather than the rial as the main currency unit in everyday transactions. Cultural reasons also play a role in this phenomenon. The toman was the national currency during the Qajar dynasty (1785-1925) and the early years of the Pahlavi dynasty (1925-1979). The rial only officially replaced the toman in 1929.

The idea to drop zeros from the currency was first raised in 1994 and then again in 2008, before nuclear-related sanctions against Iran were greatly intensified. In 2011, months before the inflation rate suddenly rose above 40% as a result of a combination of monetary policies and external pressure, a parliamentary study found currency reform unneeded, arguing that the national economy was relatively stable and that inflation was not of concern. In contrast, both proponents and opponents of the proposed currency reform now agree that it is essential to remove not one but at least three zeros from the national currency — on the condition that inflation is kept under control for a sustained period and that stability return to the Iranian economy.

The central bank's former governor, Tahmasb Mazaheri, has even said that CBI studies do not support the government’s currency reform bill. He has urged the parliament to reject the bill or replace it with a comprehensive one that could save trillions of rials in money-printing costs. Some moderate newspapers have also expressed this sentiment. On Dec. 8, the leading economic daily Donya-e Eqtesad published an article warning about a doubling of such costs.

All monetary regulations, auditing books, coins and bills will need to be changed if the bill is ratified by parliament and approved by the Guardian Council. On Dec. 8, Donya-e Eqtesad urged the administration to replace its current proposal with one that will simultaneously drop several zeros from the currency and replace the rial with the toman. Two days later, on Dec. 10, the leading daily’s editor-in-chief, Ali Mirzakhani, questioned the proposal — though cautiously — while also disputing the CBI’s claim that a mere “name change” is under consideration, saying the government’s proposal is technically for a redenomination.

Although a majority of Iranian economists agree that the administration’s proposed reform carries some advantages, as the government claims, there are major concerns over the costs of printing new bills and adapting contracts and auditing books would impose on taxpayers. Mohsen Jalalpour, a prominent entrepreneur and the former head of the Iran Chamber of Commerce, Industries, Mines and Agriculture, argues that although the economy has meaningfully improved since 2008, it still lacks sufficient growth momentum. In a piece published in Donya-e Eqtesad on Dec. 10, he noted that unemployment remains high and the annual budget is still heavily reliant on oil exports, describing the latter as proof that the country is not yet ready to embrace a currency redenomination, since double digit inflation could return if the money supply is not tightly controlled and/or the government wants to push for economic growth.

By proposing currency reform, the administration may be seeking to break down the redenomination process into two phases in a bid to manage the criticism usually raised over such crucial monetary decisions. Yet the bill appears to be facing stiff opposition — if not in the moderate-dominated parliament, most likely in the conservative Guardian Council. The government and the CBI would be able to ease the pressures they are facing and get the bill passed by both parliament and the Guardian Council if they were able to address the criticism. However, sadly for the government, such reassurances appear unlikely at present.