Why did Iranian opposition leader resign from his own party?

Green Movement leader Mehdi Karroubi, who has been under house arrest since 2011, has resigned as head of the Reformist party that he established. 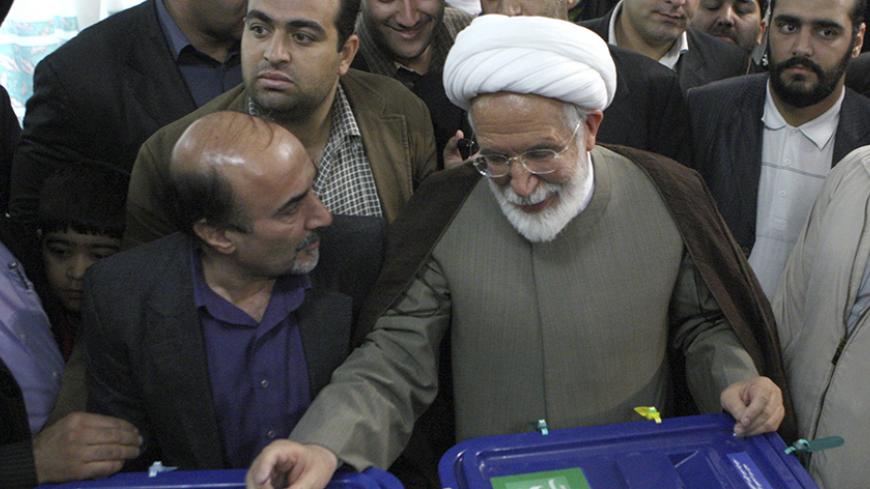 On Dec. 26, Mehdi Karroubi, one of the candidates in the disputed 2009 presidential election who later emerged as a leader of the Green Movement, resigned from his post as secretary-general of his political party. Karroubi, a former parliament speaker, has been on house arrest along with fellow Green Movement leader Mir Hossein Mousavi since 2011. Karroubi founded the Reformist National Trust Party in 2005 following his defeat in the presidential election that year.

In his letter to party members, Karroubi wrote, “As you know, the circumstances of the house arrest have prevented the possibility of pursuing matters such as the issues of the party, and my information and news about this is limited. … I urge all friends to strictly avoid any kind of disagreement and differences that can lead to expulsions or tension among the dear members of the party.”

He added, “The central council [of the party] … should have a session, and with attention to my situation [house arrest], which started in 2011, and [how] its end is unclear and no time has been set for it [to end], I request my resignation from the post of secretary-general of the party, and I urge friends to accept and approve this request without the interference of emotions and feelings and for the greater interests of the party. [You should] choose the new secretary-general with the management of Mr. [Rasoul] Montajebnia, the respected deputy of the secretary-general, and be sure that after the change of the situation and lifting of the house arrest, I will spare no effort [for the party] as a founding member.”

Karroubi continued, “This Reformist party should maintain its independence while having interaction and cooperation with other Reformist groups and figures. We should learn from the victories and defeats. You should profit from the sweet experiences of [the parliamentary and presidential elections in] 1997, 2000, 2001 [in which some tried to divide the Reformists vote by greatly barring candidates]. However, it is necessary [for you] to have interaction and collaborate [with other Reformist groups], while being careful not to get caught in artificial situations [created by some groups]. A believer is not bitten twice from the same hole.”

Of note, Montajebnia, the deputy of the secretary-general, resigned Dec. 24, apparently over some internal disagreements within the party.

Explaining the reason behind Karroubi’s resignation, his son told the Reformist Shargh daily on Dec. 27, “A series of disagreements has … come to emerge among the members of the central council [of the party]. In my meetings with my father, I relayed these disputes. During this period, we tried to build unity among the members of the central council, but unfortunately, as we came forward, the disagreements over a series of issues intensified. For this reason, my father decided to maintain the internal unity within the party and prevent division by resigning and giving over the authority to choose a new secretary-general.”

In response to the letter, Esmail Gerami Moghaddam, the spokesman for the National Trust Party, told ILNA news agency on Dec. 26, “The resignation of Mr. Karroubi surprised the members of the party and has caused dissatisfaction among all of its members, committees and various branches." He also said that the party will discuss the matter on Dec. 30.

Moreover, Rahmatollah Bigdeli, a member of the central council of the National Trust Party, told Shargh daily on Dec. 27, “In my opinion, the central council will definitely oppose Mr. Karroubi’s request.” Mentioning Montajebnia’s resignation, Bigdeli added, “The issue of Mr. Montajebnia’s resignation has been annulled. … In a letter to Mr. Karroubi, Mr. Montajebnia had presented suggestions and announced that in case of fulfillment of these proposals, he would continue his work. The letter was confidential, and Mr. Montajebnia had asked for greater unity within the party and [had demanded] that its members operate within the framework of the statutes, manifesto and ideals of the party.”