Two Egyptian directors launched a project to photograph ballerinas dancing in the streets of Cairo to highlight the capital’s beauty and art scene. 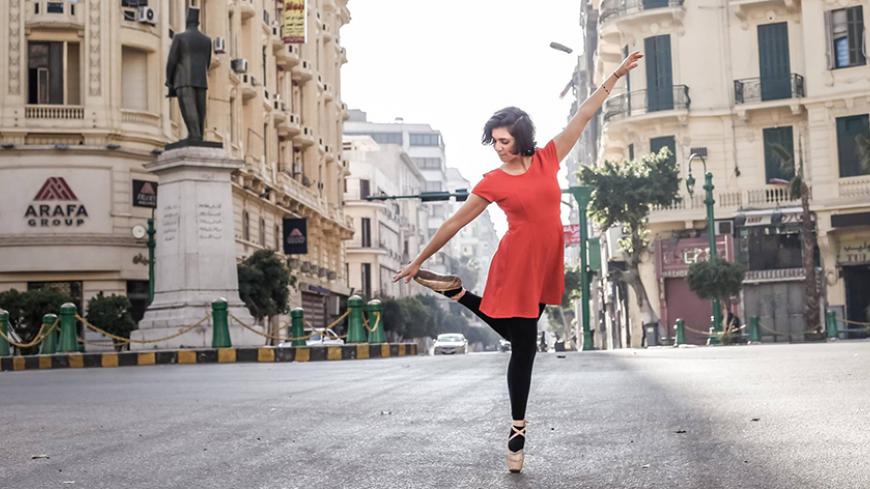 One of the ballerinas participating in the Ballerinas of Cairo project poses, Cairo, Nov. 11, 2016. - Facebook/ballerinaofcairo

“When society deserts art, art forces its presence on society” is the slogan a group of photographers and ballerinas have adopted for their art project, Ballerinas of Cairo. By taking to the streets of Cairo, the young artists have succeeded in breaking the stereotype that ballet is an art form for the upper class only. Despite the dangers of performing on the streets and fears of negative reactions from the public, the ballerinas surprise passers-by with their performances.

The project's founders and performers have taken ballet to the streets of Cairo in light of the restrictions imposed by theaters and halls that have been forced to close. Cairo's performing art scene is limited, and so the Ballerinas of Cairo project exposes the public and tourists alike to what is readily available in big cities such as New York and Paris.

The idea came about when Mohamed Taher, a young director, was inspired by the Ballerina Project in New York, which was established 17 years ago by American photographer Dane Shitagi. Shitagi’s project also inspired photographers in several countries, such as Australia and France.

Given the attention the Ballerinas of Cairo project received on social media, the organizers are now preparing to take the street performances to other governorates, hold photo exhibitions of the shows and promote the project outside Egypt.

Taher co-founded the project with another director, Ahmed Fathy. They collaborated with ballerina Mariam El Gebali, who performed the project in public for the first time in Heliopolis, an upscale suburb of Cairo, in January 2016. Following these performances, pictures of the shows emerged on social media.

Taher told Al-Monitor, “The idea was inspired by the project of an American photographer who in the 1990s aimed at making ballet an art for all social classes rather than for a specific class. His idea was successful and became popular in Paris, Moscow and London. I have had the idea to re-create this project in Egypt for a long time, but I was very hesitant.”

He said, “However, when I discussed it with my director friend Fathy, he welcomed the idea and we decided to start in Heliopolis. It took place in the morning because we didn’t want to take any risks on our first performance.”

Taher added, “I didn’t expect the idea to be so successful. We performed several shows in El Hussein, Cornich El Nile and Garden City.”

During the street performances, many passers-by would stop and take pictures, which quickly spread on social media; more than 61,000 people now follow the Ballerinas of Cairo page on Facebook.

When asked about the most difficult shows they performed, Taher said, “The performance in downtown [Cairo] was quite difficult given the heavy traffic, which made it harder for us to shoot. Our objective is an image that shows the beauty of ballet as an art as well as Cairo’s sites.”

He added, “I am planning on shooting [ballet performances] in popular areas. However, I haven’t yet decided which area is suitable for my project. The only condition is that it includes one of the known sites of Cairo, without taking social class into account."

Taher denied any concerns of sexual harassment, saying, “We performed shows on side roads in El Hussein and never witnessed any sort of harassment.” On the contrary, Taher described the way residents in El Hussein treated the ballerinas as “friendly and loving.”

He hopes that the Ministry of Tourism and the Ministry of Culture will approve his project. “I want to use several archaeological and tourist sites, but I haven't been able to get the permits from the various governmental authorities," he said.

Taher noted that the project aims at attracting tourists and showing Cairo's sites in a different way.

“The project has succeeded in delivering the message that Cairo is replete with unique sites and that ballet is an art that suits all classes of society,” Fathy told Al-Monitor.

According to Fathy, the idea of the project is to combine three art forms: architecture, ballet and photography. So far, Ballerinas of Cairo has performed 11 shows on several streets in Cairo, all of which were photographed.

While Taher said that the performers had not been exposed to any harassment during the street performances, Fathy said, “The ballerinas were not exposed to harassment, except during one of the performances on the Cornich El Nile when some drivers on the road made indecent comments. However, such harassments will not stop our project; in fact, it convinced us to continue shooting the performance the best we could.”

He added, “The project will grow in the coming months as we will organize ballet performances in the governorates outside Cairo in order to highlight the unique sites of Egypt.”

Marina Bahy, one of the project's ballerinas, told the press Sept. 7, “I was among the first to join the team in January 2016. In the beginning, I was anxious about dancing in the street as I thought people might not accept it. However, having one of my friends with me calmed me to some extent.”

She continued, “My parents were worried at first, but they did not disapprove. They said it was OK for me to [be part of the project]. They were afraid that I might be exposed to physical or verbal harassment by passers-by. However, they were relieved when they saw the photos and read the comments."

Although the Ballerinas of Cairo project has been successful so far, the Ministry of Tourism continues to ignore it. Despite Egypt’s decline in tourism, the ministry has failed to take advantage of this popular artistic event in the streets of Cairo to promote the beauty of the capital.