For the first time since the establishment of Israel, an ultra-Orthodox party will hold primaries to determine its list for the next election instead of relying on rabbis to name them. 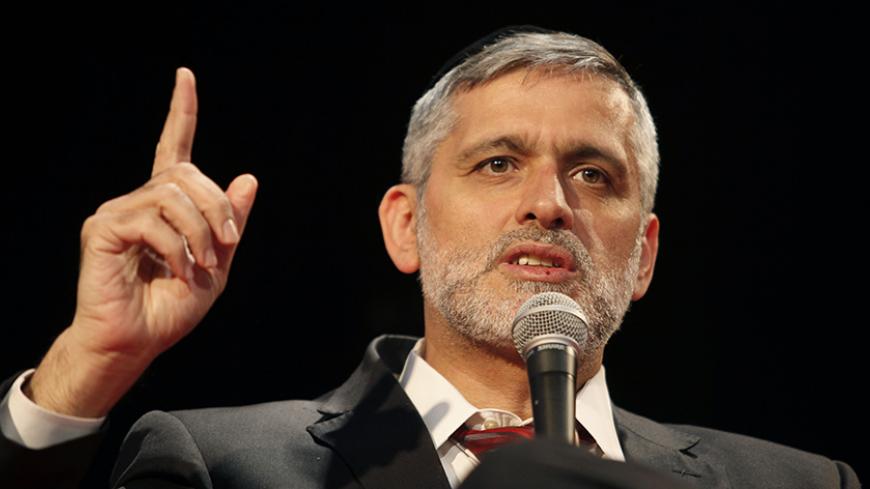 Israeli Interior Minister Eli Yishai, then one of the leaders of the ultra-Orthodox Shas Party, gestures during the first high-tech conference for the ultra-Orthodox sector in Jerusalem, Israel, Jan. 15, 2013. - GALI TIBBON/AFP/Getty Images

Former minister and Knesset member Eli Yishai, the former chairman of ultra-Orthodox Shas who ran in the last election in a new party (Yachad), revealed on Oct. 16 that the party will hold open primaries in advance of the next election. These primaries will determine Yachad's list for the Knesset. In the 2015 election, the Yachad list didn’t win the minimum votes for a seat in the Knesset, but Yishai is not giving up.

Yishai’s decision to hold primaries has shaken up the ultra-Orthodox community. Since the establishment of the state, ultra-Orthodox parties have never held primaries. The parties’ leading rabbis determine the lists of candidates, making an effort to represent the sector’s subgroups on the list.

Actually, secular parties like Defense Minister Avigdor Liberman’s Yisrael Beitenu, Yair Lapid’s Yesh Atid and even Finance Minister Moshe Kahlon’s Kulanu also don’t hold primaries — a point that is much critiqued in Israeli political discourse. Thus, the decision of a party that defines itself as ultra-Orthodox to hold primaries is undoubtedly an unusual move, since at least in the eyes of some party members it indicates the beginning of a much bigger change that could even lead to a revolution in the way all of the ultra-Orthodox parties’ lists are composed.

According to Yishai’s plan, which received the blessing of Yachad’s spiritual leader, Rabbi Meir Mazuz, candidates who wish to run under the auspices of the party will be vetted by its leadership, and those who are approved will receive a spot on its list according to the preference of party members.

A source within the party and close to Yishai explained to Al-Monitor that the goal of the initial vetting is to prevent “malicious” elements from planting representatives within the party who would damage its character. In advance of the primaries, the party is set to announce the opening of membership registration, where the party expects some 10,000 members to register in the initial stage.

“There’s no doubt this is a dramatic decision that will shake up ultra-Orthodox politics,” the senior Yachad figure told Al-Monitor on condition of anonymity. “The decision to hold primaries came from the field. We understood that there are groups within the ultra-Orthodox sector that feel they are not represented. For example, ultra-Orthodox men who work, [Israeli-]American ultra-Orthodox and other groups. So we decided to open up the party to members. This move, in its uniqueness, will take votes from all the ultra-Orthodox parties. Also from Shas and from Yahadut HaTorah.”

He went on, “Our message will be mainly [directed] toward Shas. We’ll present clean hands compared to corruption and shady dealings, transparent primaries in a vote that is open to the public as opposed to a biased nomination process. Eli Yishai has been in politics for 30 years, and nothing has stuck to him. They investigated him to no end, even hired private investigators. The decision to hold primaries is a reflection of Eli Yishai’s public integrity and embodies his devotion to public service, rather than an interest in using the public for his own needs.”

Veteran ultra-Orthodox political commentator Yaakov Rivlin doubts the sincerity of the move and argues that what motivated Yishai is the desire to take stock of the size of his electorate base. “It’s not really primaries, since an ‘organizing committee’ will approve the candidates ahead of time, and everything will stay in the family,” he told Al-Monitor. Rivlin also doesn’t believe that the party will succeed in attracting the so-called underrepresented groups in the ultra-Orthodox sector.

“Many have tried before him and didn’t succeed,” said Rivlin. “I don’t see a reason for an [Israeli-]American ultra-Orthodox person from the Jerusalem Har Nof neighborhood to decide to vote for an extreme right-wing party because it holds primaries.” According to Rivlin, contrary to the hopes of those surrounding Yishai, the unexpected move won’t influence the other ultra-Orthodox parties. “If there were really a democratic game here and primaries incorporated new leaders, it could indirectly create some shake-up in the old systems of the veteran ultra-Orthodox parties. But as it appears now, it seems that what was will remain.”

Lawyer Yehezkel Rosenblum — who represents a group within the ultra-Orthodox sector that defines itself as “Israeli ultra-Orthodox,” meaning ultra-Orthodox and engaged in Israeli public life, that according to him is underrepresented within the existing political system — actually thinks the move could change ultra-Orthodox politics. “No doubt this is a refreshing change and the start of a new [kind of] politics,” he told Al-Monitor. “It is clear that it will influence all the ultra-Orthodox parties. The question is only how long it will take. That’s a mystery, I think. However, as someone familiar with the system, I know that it could take a long time.”

Essentially, Rosenblum isn’t at all sure whether the group he leads could support a staunchly right-wing party like Yishai’s. “Even though most ultra-Orthodox have right-wing views, in our group many more lean left, so this political platform is something we would find difficult to support even though the move itself is interesting and precedential.”

On the other hand, we can assume that on the margins, the move could rake in some voters who feel unrepresented. The gimmick could bring them to vote for the party, even if they didn’t initially think of supporting it.