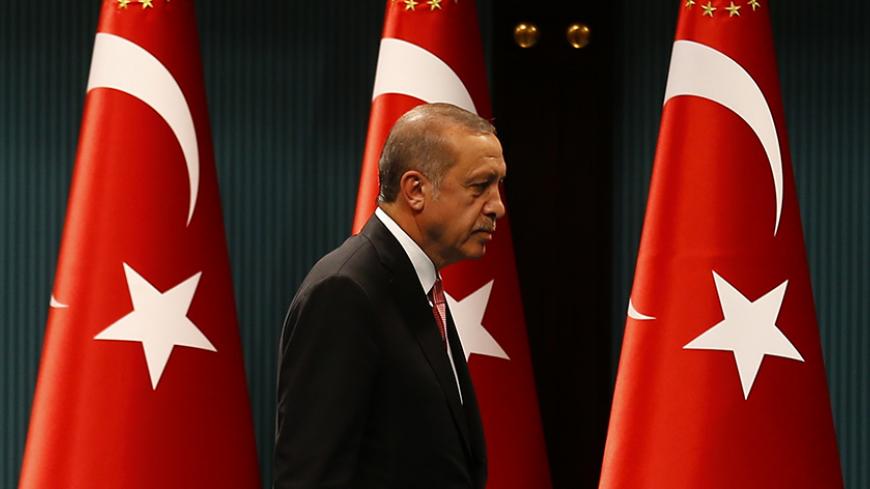 Upon assuming office in May, Prime Minister Binali Yildirim promised that he would “increase the number of Turkey’s friends and reduce the number of its enemies.” Today, however, Ankara is losing friends rapidly, especially in Europe where there are calls for sanctions against Turkey. The situation is no better in the Middle East where Iraqi Prime Minister Haider al-Abadi is talking about going to war with Turkey. The main deterioration in ties is nevertheless with Europe. President Recep Tayyip Erdogan’s increasingly authoritarian manner, with his apparent desire to become the iron-fisted ruler of Turkey, is driving this downward spiral.

Yildirim’s promise was just another version of Ankara’s “zero problems with neighbors” policy formulated by former Prime Minister Ahmet Davutoglu. Serious policy miscalculations, however, especially in regard to the Middle East after 2011, had left Turkey with hardly any friendly neighbors let alone zero problems with them. It did not take long for the positive expectations Yildirim generated to also be dashed. Turkey today appears to be more friendless than ever.

Ankara’s tense ties with the United States were exacerbated over the issues of Washington’s alleged initial ambivalence regarding the failed coup attempt of July 15 and its reluctance to extradite Fethullah Gulen, the Islamic cleric residing in Pennsylvania whom the Turkish government accuses of masterminding the coup.

Ankara is also angry about Washington’s refusal to sever ties with the Democratic Union Party (PYD) in Syria and its military wing, the People's Protection Units (YPG), which are part of the US-led coalition against the Islamic State (IS). Turkey says these groups are linked to the outlawed Kurdistan Workers Party (PKK) and therefore accuses the United States of supporting terrorism.

Turkey’s relations with Europe are increasingly strained over the same issues. Davutoglu’s refugee deal with the European Union (EU) in March, despite the criticism it elicited, seemed to point toward a new start in Turkey’s struggling ties with Europe. The recent raid on Cumhuriyet, a left-leaning, liberal daily opposed to Erdogan, and the arrest of the leaders and prominent deputies of the pro-Kurdish People's Democratic Party (HDP) have drastically reduced any advances in ties gained by the refugee accord.

EU foreign policy chief Federica Mogherini and German Foreign Minister Frank-Walter Steinmeier have criticized these undemocratic and legally questionable developments, arguing that Turkey’s right to combat terrorism does not justify attempts to silence opponents. Such European criticism and reports and caricatures in the Western media depicting Erdogan as a dictator have left the Turkish president livid. “I don’t care if they call me a dictator or whatever else,” Erdogan retorted defiantly in a speech in Istanbul on Nov. 6. “It goes in one ear, out the other.”

He also said that trying “to bring Turkey into line” by calling him a dictator and using press reports and insulting caricatures would fail. Erdogan then went on to accuse European countries of supporting terrorism through the Gulen movement and the PKK, and said that Western opinions “were no longer a measure for Turkey.”

Reflecting Ankara’s anger toward Germany, Foreign Minister Mevlut Cavusoglu is said to have refused to answer two phone calls from Steinmeier last week. Ankara is still smarting over the Armenian genocide resolution adopted by the Bundestag in June. In addition, the German press reports that Turkey has refused to give Steinmeier a date for visiting Ankara for talks aimed at ironing out bilateral difficulties and discussing the German military presence at the Incirlik air base in Turkey, where it is supporting the US-led coalition against IS.

The Europeans' main sins, according to Turkey, include their failure to understand the gravity of the July 15 coup attempt, and as in the case of Germany, their reluctance to extradite fugitives accused of links to the Gulenists. European countries, mainly Germany and Belgium, are also accused of doing nothing to curb PKK supporters, allowing them instead to organize programs, exhibitions and mass events amounting to political rallies despite the PKK being an internationally listed terrorist organization.

On Nov. 3, Ankara condemned a decision by a Belgian court rejecting a request by the federal prosecutor to forward a case involving 36 persons with links to the PKK to a criminal court. “We consider and condemn this ruling as an explicit and new indication of an unprincipled attitude in the fight against terrorism and a mindset which has enabled the PKK terrorist organization to operate with ease in Belgium so far,” the Foreign Ministry said.

European diplomats in Ankara who spoke to Al-Monitor on condition of anonymity said the lack of confidence in Turkey’s legal system and what appears to be the arbitrary detention of Erdogan opponents is not helping the government promote its case in Europe.

Luxembourg’s foreign minister, Jean Asselborn, even compared Turkey today to Nazi Germany. “To put it bluntly, these are methods that were used during the Nazi era and that's a really, really bad development … that the European Union simply cannot accept,” Asselborn said. He indicated that sanctions against Turkey might be necessary.

Despite being in Ankara’s crosshairs, Germany did not support Asselborn's view. Pointing to Turkey’s key position in the fight against IS, Interior Minister Thomas de Maiziere said, “A differentiated look, also to safeguard our interests, is the right approach.” Steffen Seibert, Chancellor Angela Merkel's spokesman, added that maintaining channels of communication with Turkey was important.

Employing a less defiant tone than Erdogan, Turkey’s EU minister, Omer Celik, said he would not want to see Turkish-EU ties disrupted and characterized as “racists” those Europeans calling for Ankara’s membership talks to be severed. “I believe full membership in the EU is correct from the perspective of Turkey’s national interests,” Celik said after meeting EU ambassadors in Ankara Nov. 7.

Despite the popularity of Erdogan's “To hell with Europe!” attitude among his hardline supporters, it is not endorsed by some senior members of the ruling Justice and Development Party (AKP).

Omer Dincer, a former labor and social security minister and education minister under Erdogan when he was prime minister, pointed out that Turkey had been suffering from social unrest and economic uncertainty when the AKP came to power in 2002. In an article for the daily Haberturk, Dincer said that although the AKP was successful in overcoming these difficulties, the boost it got from the EU in achieving this could not be overlooked. “By preferring EU standards and democracy, our international reputation and consequently our international trade and the inflow of foreign capital increased,” Dincer noted.

Turkey today, however, appears to have taken a different trajectory. Ahmet Hakan, the highly popular columnist for the daily Hurriyet, laid the current picture bare in a Nov. 7 column: “Turkey’s rulers say we are under attack from domestic and international enemies on all sides. … If the situation is really like that, what are those who are ruling Turkey doing to get out of this situation?” Hakan asked. “Internationally, they are increasing the number of our enemies. … They don’t try to find allies. … They cannot find a way out through shared wisdom.”