Turkey’s 'big bosses' gather courage to speak out on economy

Turkey’s most powerful business group, TUSIAD, long silenced by the government, seems to be regaining its voice as the country’s economic downturn worsens. 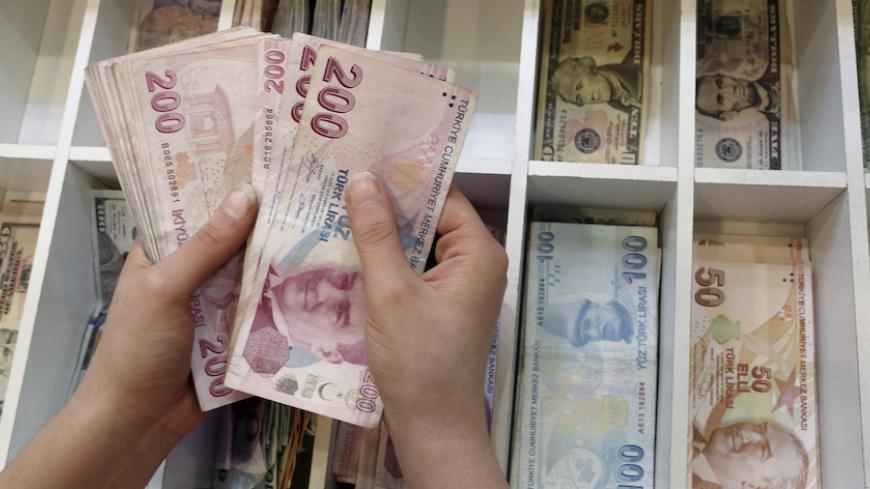 The Turkish economy has entered serious turbulence, stoked by the outcome of the US presidential elections and the prospect of a rate hike by the US Federal Reserve in December. In the most glaring manifestation of the upheaval, the Turkish lira has nosedived against the dollar.

Before Turkey’s credit rating was cut to “junk,” the dollar traded at 2.96 Turkish liras. In the past month and a half, and especially after the US presidential elections, it has risen fast, climbing to 3.4 Turkish liras. Accordingly, the $211 billion net debt of private companies, which equaled 622 billion Turkish liras, now stands at 717 billion Turkish liras. This means these companies have incurred losses of 95 billion Turkish liras, or $25 billion, merely through an exchange rate difference. To better illustrate the magnitude of the damage, one should recall that the market value of Turkey’s largest industrial enterprise, the TUPRAS oil refinery, owned by the Koc business empire, is $5 billion, meaning that the said losses amount to five TUPRASes.

The turbulence, however, is not over, and Turkey’s risk premium continues to increase. At the end of the third week in November, Turkey’s credit default swaps premium had reached 296, up from about 250 before the US elections, trailing second, behind Brazil, whose premium stood at 310.

How is Turkey's ruling Justice and Development Party (AKP) reacting to this alarming trend? Government officials have adopted one assertion as a refrain: The trend is not peculiar to Turkey. All emerging economies have suffered capital flight after the US elections and have seen their currencies weaken. That’s true, but one question remains unanswered: Why has the Turkish lira lost more value than the others? Is this a sign of more alarming prospects for Turkey?

The government has been reluctant to acknowledge the economy’s fragility, dismissing the downturn in the third quarter as an exception and arguing that the economy will pick up, investments will increase, and the current account deficit will not worsen. Given Turkey’s heavy dependence on foreign capital, how this is going to happen as foreign capital flees remains a mystery, even more so give how Ankara’s adventurist rhetoric about severing ties with the European Union (EU) and joining the Shanghai Cooperation Organization spreads uncertainty.

What about the Turkish business community? How is it responding to the risks and the government’s attitude?

From the 1970s until the AKP came to power in 2002, the Turkish Industry and Business Association (TUSIAD) was the main pressure group steering the course of the economy. Such business giants as Koc, Sabanci, Eczacibasi, Borusan, Anadolu Endustri, Akkok, Tekfen and Boyner — which controlled 50% of added value in the Turkish economy and 80% of foreign trade — are all in TUSIAD and are extremely sensitive to developments affecting the economy.

Over the decades, the big bosses club backed both the political center-right and the center-left, depending on its interests, and drew on the media might of the Dogan Group, a prominent member of the club, to shape public opinion accordingly. Pioneering globalization and international economic integration, TUSIAD backed Turkey’s bid to join the EU, seeing it as a peg to keep the country on course.

In regard to political Islam — represented by parties led by President Recep Tayyip Erdogan’s mentor, the late Necmettin Erbakan — TUSIAD always maintained a reserved attitude. When Erdogan and Abdullah Gul deserted Erbakan to create the AKP, TUSIAD remained wary, but there was no alternative in the runup to the 2002 elections, as a severe economic crisis the year before had crushed the center-right and the center-left in part. It, therefore, had to acquiesce to the AKP after the party came to power alone, having generated support among angry masses hit by the crisis.

In its early years, the AKP maintained good relations with both the EU and the International Monetary Fund (IMF). It pursued aggressive privatization and stuck to neoliberal norms in managing the IMF-backed recovering economy, so much so that even the IMF was surprised. Helped by tailwinds at home and abroad, the government boosted economic growth to 7% per year, and as a result, TUSIAD’s stance toward the AKP softened. Keen to create its own bourgeois, the AKP favored the Islamic-leaning Independent Businessmen Association and pitted its own capitalists against TUSIAD, but TUSIAD was still inclined to see the party as “conservative reformists,” like much of Turkey’s liberal left and even some members of the Kurdish political movement did.

When the AKP turned toward authoritarian policies, especially after 2011, TUSIAD’s criticism was dismissed and suppressed by the tough-talking Erdogan, who felt much more empowered by that time. Meanwhile, critics in the media were intimidated by giant tax penalties against the Dogan Group. The more the AKP tightened control over the judiciary and the legislature, the more TUSIAD’s voice weakened, as the business community grew apprehensive about economic sanctions, including the tax cudgel. On the rare occasions that TUSIAD spoke up, it faced new intimidations, such as in September 2014, when Erdogan accused the group of having colluded with the military when it forced Erbakan, Turkey’s first Islamist prime minister, to resign in 1997.

What is TUSIAD supposed to do now that the risks to the Turkish economy are on the rise, fueled in part by Erdogan’s drive to install a presidential regime? A major new element in the picture is the US presidential election victory of Donald Trump, who many believe will be more responsive to the grumblings of the business world. Indeed, TUSIAD last week was back in the headlines, criticizing the government and issuing a poignant appeal for a return to the rule of law.

Speaking at a Nov. 16 gathering in Istanbul, Gul, the former president who once was Erdogan’s right-hand man, warned against parting ways with the EU and its democratic standards. TUSIAD's deputy chairman, Sedat Sukru Unluturk, stressed that Turkey was at a critical juncture. “What will be the new normal for Turkey — conflict and chaos or the rule of law and democratic values?” he asked. The following day, TUSIAD Chairwoman Cansen Basaran Symes said the business community was “extremely worried” about the economic downturn. Deputy Prime Minister Mehmet Simsek, who is in charge of the economy, responded with a veiled warning, urging the business community to stop “pumping pessimism.”

It appears likely that Trump’s presidency will alter balances in the Middle East and Turkey. TUSIAD seems poised to muster courage from having a fellow businessperson in the White House to raise its voice to Ankara.