The Iranian capital of Tehran's alarming levels of air pollution fan the flames of factional infighting. 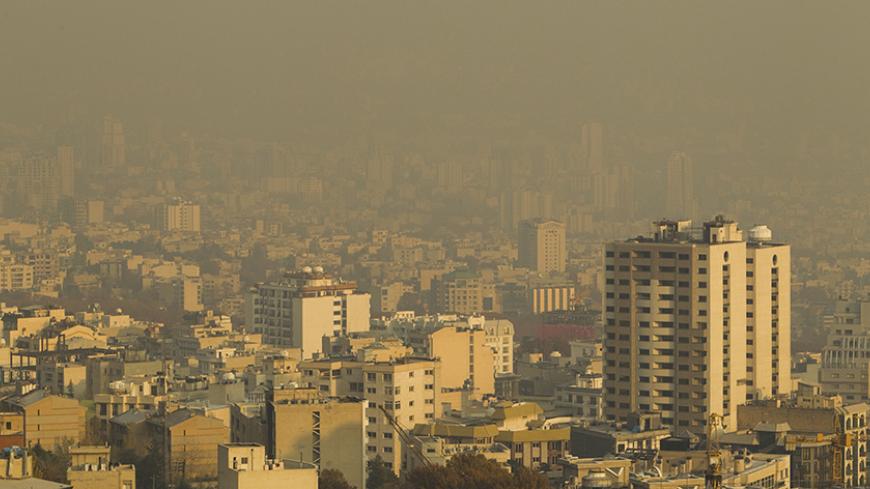 Authorities in the Iranian capital of Tehran shut down all schools on Nov. 16 due to alarming air pollution levels, while political factions accuse one another of irresponsibility on the issue. Primary schools and kindergartens have been closed in the city since Nov. 14, as a thick layer of smog has covered the city’s landscape.

The geographical situation of the capital, which is surrounded by mountains, consumption of low-quality fuel because of international sanctions and industrial pollution have been declared the main reasons for the deaths of 412 citizens in the past 23 days, according to Habib Kashani, a member of Tehran’s municipal council.

On Nov. 15, Kashani accused Iran's Environmental Protection Organization of “ineffectiveness” and “incompetence,” saying, “The government and the [Tehran] municipality have announced that they are not blameful on this issue. So sole blameful are people who are losing their lives!”

On Nov. 16, President Hassan Rouhani wrote on his Persian-language Twitter account, “Over the last three years we’ve shifted to consume [natural] gas in industrial centers and power plants to reduce air pollution.” He also tweeted that his administration has replaced low-quality fuel with the Euro-4 standard fuel and has phased out 809,000 old vehicles.

Rouhani’s tweets were in response to a weeklong debate in Iranian media about which entity was responsible for the deaths of Tehran's citizens. On Nov. 15, the Reformist Etemad daily on its front page wrote, “Sorry for this repetitive headline: Air is polluted.” The daily continued, “We are all responsible. We are responsible because we cannot convince authorities to be accountable … you are responsible because you don’t accept to turn off your car engine … and those who are sitting at their desk and know nothing but to shut down schools [due to pollution] are also responsible.”

On the same day, the conservative Javan newspaper pointed the finger at the Oil Ministry and blamed it for “disregarding investment in efficient energy use.” Javan quoted a member of the Iran Chamber of Commerce Industries and Mines Ali Shams Ardakani arguing, “If the Oil Ministry fulfills its commitment, investors will improve the transportation network, which eventually will help to resolve the pollution issue.”

The newspaper Iran reported that since the beginning of the fall, the critically polluted period in Tehran has dramatically reduced compared to the same period in 2011 and 2012. Under the headline “When Weather Becomes Politicized,” the daily blamed the previous administration for the current weather pollution in the capital.

“The previous administration’s wrong plans and policies left the country in the tangled web of sanctions that led to the consumption of nonstandard fuel,” said Iran. According to the daily, that decision was “unprofessional and harmful to the environment and the people’s health.”

Meanwhile, Iranians have taken to social media to show their deep disappointment about the level of pollution in the air that they breathe. A Twitter user called Sahand Iranmehr posted on his account, “Today I heard the most frightening minimal story: Breathing is not good for your health.”