During the Ain Sokhna conference in Egypt, Palestinian businessmen put forth the decade-old idea of a free trade zone between both parties, in a bid to ease the Israeli siege imposed on the Gaza Strip. 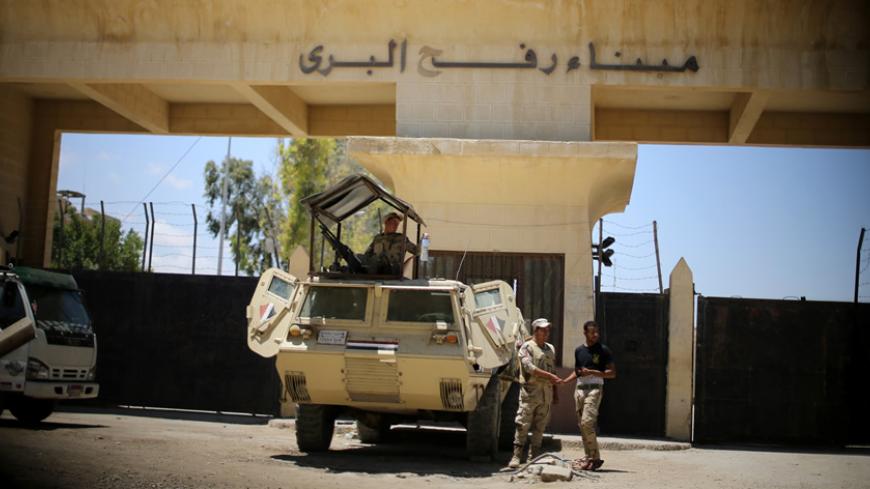 Egyptian soldiers are seen through a hole in a gate standing guard in front of the Rafah border crossing, between Egypt and the southern Gaza Strip, May 19, 2016. - REUTERS/Ibraheem Abu Mustafa

AIN SOKHNA, Egypt — Egypt invited businessmen and economists from the Gaza Strip to attend the second meeting of the Ain Sokhna conference in the Ain Sokhna Red Sea resort on Nov. 7-9 to discuss the Palestinian cause and the blockade imposed by Israel. Palestinian businessmen saw this invitation as a positive sign of Egypt’s openness to build commercial ties with Gaza, particularly since one of the most important topics discussed at the conference was reviving the project of the free industrial trade zone between Egypt and the Gaza Strip.

The first meeting in Ain Sokhna had taken place Oct. 16-18.

The chairman of the Palestinian Businessmen Association in the Gaza Strip, Ali al-Hayek, who participated in the conference organized by the National Center for Middle East Studies in Egypt, told Al-Monitor that over 30 businessmen and economists from Gaza received invitations to discuss the Israeli blockade that prevents various commodities and raw materials from entering Gaza, thus preventing the reconstruction of Gaza.

He said, “We came to the conference to talk about Gaza’s economic problems. The solution would be through a trade exchange between us and Egypt. We would like to have Egyptian raw materials and products to replace the Israeli products whose entry into Gaza is limited by Israel.”

Hayek said that the joint free industrial trade zone between Egypt and Gaza was one of the most important points raised by the Palestinian businessmen, noting, “Egypt was responsive to some of the topics we put forward. We felt it was seriously welcoming the need to start a business partnership between Palestinians and Egyptians, by first opening the Rafah commercial crossing for goods and raw materials to enter the Gaza Strip.”

The idea of a free industrial trade zone between Gaza and Egypt is not new. It was first proposed 10 years ago by both Egyptians and Palestinians under Egyptian President Hosni Mubarak. In 2012, the idea re-emerged during the presidency of Mohammed Morsi as a proposed alternative to the tunnels along the Egyptian-Palestinian border through which goods entered Gaza. But in September of the same year, plans for a zone were abandoned under the excuse that it would separate Gaza from the rest of the Palestinian territories and turn it into an independent entity. The issue was again placed on the agenda during the second edition of the Ain Sokhna conference.

Israel, for its part, is being cautious about the establishment of a free industrial trade zone between the Gaza Strip and Egypt. On Nov. 14, The Times of Israel placed the project in the context of Egypt’s efforts to alleviate the Israeli blockade imposed on Gaza since 2006, saying, “This project will allow traders in Gaza to buy products directly from the Egyptian town of Rafah. This step serves as a partial lifting of the Israeli blockade imposed on the border between Israel and Gaza.”

Maher Tabbah, the director of public relations at the chamber of commerce in the Gaza Strip, told Al-Monitor that the idea of the zone had emerged after Israel withdrew from Gaza in 2005. But the situation started deteriorating until the Palestinian division in mid-June 2007 disrupted all these efforts.

Tabbah, who participated in the conference in Ain Sokhna, said, “Both Egyptians and Palestinians suggested the free industrial trade zone in order to enhance trade exchange and joint investments through the establishment of joint factories in that zone. The idea was brought up again in 2012 when an Egyptian economic delegation visited Gaza, but the [internal] division prevented the implementation of the project.”

Tabbah believes that the project will encourage economic cooperation and interdependence between Egyptians and Palestinians, as well as provide international and Arab prospects for the Palestinian people through Egypt. It will attract Palestinian and Egyptian capital by providing a secure investment environment and building factories on both sides to find a structural link between their industrial activities.

According to Tabbah, the project will create many employment opportunities for the Egyptian and Palestinian labor force and increase the national income of the industrial sector, as well as create a large number of jobs in Palestinian areas and reduce the high unemployment rate in the Gaza Strip, which exceeds 43%.

For his part, Osama Kahil, the chairman of the Palestinian Contractors Union in Gaza, told Al-Monitor that the Palestinian businessmen who attended the conference have recommended — in agreement with the National Center for Middle East Studies in Egypt — the need to form several economic committees, including a special one for the proposed free industrial trade zone.

He said, “A Palestinian committee is currently being formed to follow up on the affairs of the free industrial trade zone that will be ready by December 2016; a similar one will also be formed by Egypt. [The committees] will conduct a comprehensive study for the project. We are simply dusting off this proposal and we will implement it based on a vision that is in line with both the Egyptian and Palestinian political and security situation, all the while protecting it from the Israelis in order for it to be safe for investments.”

Kahil believes that both the Egyptians and Palestinians will greatly benefit from the project, since several factories will be set up to manufacture goods for export. “We, as Palestinians, are exempted from customs in a number of countries, such as Turkey, Morocco and the Euro-Mediterranean countries as per signed free trade agreements, and thus the zone will be of great usefulness to both sides. The Palestinians will reap benefits in all economic sectors, such as contractors and traders who will get materials and commodities at cheaper prices, as well as artisans and industrialists who will have more job opportunities,” he said.

First undersecretary at the Egyptian Ministry of Commerce and Industry Saeed Abdullah told Al-Monitor that a decision to establish the free zone was taken years ago, but it was put on hold because of the security situation in the Sinai Peninsula, where the zone would be established, and the Palestinian internal division.

He said, “It was supposed to be a large-scale project. Even the Italians were supposed to take part in it, but we faced many obstacles — most importantly the security situation.”

Abdullah believes that the zone would serve both Egyptians and Palestinians in Gaza, and especially the latter, as it would provide many employment opportunities for Palestinians, as well as ready-to-trade goods and raw materials for manufacturing.

The revival of the idea of a free industrial trade zone between the Gaza Strip and Egypt is a glimmer of hope for Gazans, especially since Israel continues to prevent the passage of thousands of goods and raw materials into Gaza that it has been keeping under blockade for over 10 years.