Why recent calls for protests failed to materialize in Egypt

Calls for mass protests on Nov. 11 failed to bring Egyptians out into the streets, not only due to an increased police presence but also to a shifting sense among the populace about how to best enact change. 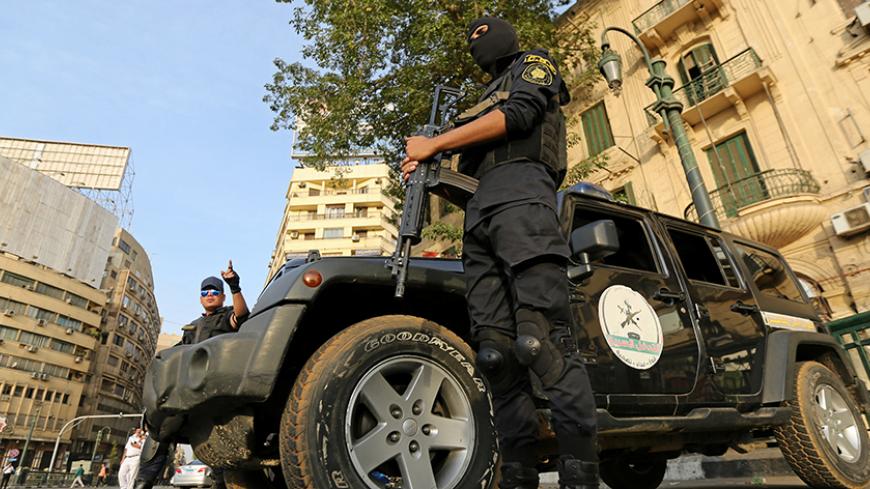 Egyptians were anxiously waiting to see if anything would happen on Nov. 11, after widespread calls for protests for this day went public on social media. Under the banner of “Thawret El Ghalaba” (“Revolution of the Poor”), the calls for protest mainly focused on the suffering faced by low-income classes that has resulted from the large drop in the value of the local currency as well as the inflation rate rising to an unprecedented level — reaching 14% in October.

The economic decisions issued on Nov. 3 to free float the Egyptian pound and raise fuel prices were not enough to urge Egyptians to participate in the protests. As Al-Monitor’s correspondent toured different areas in the Cairo and Giza governorates on Nov. 11, it became apparent that most streets were devoid of protesters and even pedestrians. In addition, there was a heavy deployment of security forces and armored personnel carriers in main streets and squares. Only a few supporters of the incumbent regime could make their way to Tahrir Square after the security forces gave them permission to enter the square for no more than two hours before they were asked to leave.

The Egyptian security forces maintained a heavy presence, which allowed it to implement its central plan to abort demonstrations before they even started and to keep demonstrators from gathering at streets or squares. Security also arrested dozens in governorates such as Minya, Bani Suweif in Upper Egypt, Suez in the East and Bahaira in Egypt’s Delta.

“Failure of protest calls does not mean Egyptians are satisfied about the authority or their loss of ability to express anger,” Ammar Ali Hassan, a researcher in political sociology and a journalist, told Al-Monitor. He added, “For many Egyptians, the protests were called for by unknown people. From their experience with similar incidents, Egyptians have learned not to participate in such protests that lack clear strategy, vision and leadership.”

According to Hassan, Egyptians look for an alternative before seeking to remove an already-incumbent authority, as this is part of their historical and political culture. To illustrate, he noted what he named the “suffering of revolutionaries in January 2011” when they tried to convince a very large base of the Egyptian people to remove then-President Hosni Mubarak, as there was no alternative for him. “When Mubarak handed the power over to SCAF [Supreme Council of the Armed Forces], the people were only satisfied that there was finally an alternative, even if they did not trust that alternative,” Hassan said.

Hassan noted the calls by the Muslim Brotherhood’s youth leadership to participate in protests were an attempt to exploit the latent anger of many Egyptians who are suffering from economic conditions. Hassan considers the Brotherhood’s calls for protesting among the reasons why the protests failed. He stated that Egyptians, including the youth who take the initiative of field activism, have learned from the past that the Brotherhood monopolizes all benefits of protests.

Hassan added that the heavy security deployment and Abdel Fattah al-Sisi’s speech about the army being able to deploy across the entire country in six hours were strong reasons for Egyptians not to protest. However, Hassan sees that if all categories of Egyptians move, the military will have no other choice but to take the people’s side.

Hassan noted that Mubarak’s military history was far more extensive than Sisi’s. However, Mubarak was sacrificed when Egyptians calling for change took to the streets in the millions. Hassan stressed that the main component of Egypt’s army is civilian recruits. Therefore, even if the military leadership stands with the president against millions of Egyptians, that main component will not respond. Hence, the easier choice for the command would be to sacrifice the president.

Hassan said that the deterioration in Sisi’s popularity, as well as the anger felt by many lower-income Egyptians, is not enough to make Egyptians take to the streets in the thousands to make a tangible political change.

“The possibility that Egyptians would explode in anger in the near future still holds, especially as the ability of outreach is faster than before, due to the communications revolution. Very few groups could take to the streets due to the difficult economic conditions. However, one photo where a policeman is insulting a young man or treating him inhumanly could drive thousands to protest. Therefore, anger driven by insult of dignity could act as a snowball rolling all over Egypt,” Hassan said.

Meanwhile, Saied Sadiq, a professor of political sociology at the American University in Cairo, sees that calls for million-man rallies were vulgarized in the last five years and lost their meaning due to the increase in the number of those who called for them. “All political factions today, including the Muslim Brotherhood, are unable to achieve mass mobilization to [protest] any of the conditions the country is witnessing, whether they are related to freedoms, economic crises or political affairs,” he said.

However, Sadiq did not lose sight of the impact of the protest law or what he described as the “excessive use of force” adopted by Egyptian security to shut down opportunities for the opposition to demonstrate. At the same time, he said, all regimes threaten to use force, and the current security force is weaker than it was during Mubarak’s reign. However, the masses could nevertheless force the will they had in January 2011. Sadiq stressed that the streets will be owned by the people only when a true movement comes into play, and that such a movement has yet to occur since day one of Sisi’s presidency.

“No other revolution will rise in Egypt,” Sadiq told Al-Monitor. He maintained that the Egyptian mood now considers any on-the-ground movement infeasible, as social and economic conditions will not improve through a revolution. “Any opposition power has to understand this truth and has to quit attempts of breathing the January revolution into the souls of Egyptians until they succeed in bringing about change on the political map of Egypt.”

Sadiq added that revolutions are a rare phenomenon in the history of nations. However, he ended up acknowledging that if citizens, once again, believe in a revolution’s ability to make change, they will take to the streets, and security crackdowns will not be able to stop them.