US celebrity Lindsay Lohan has become an unlikely promoter of Turkey. 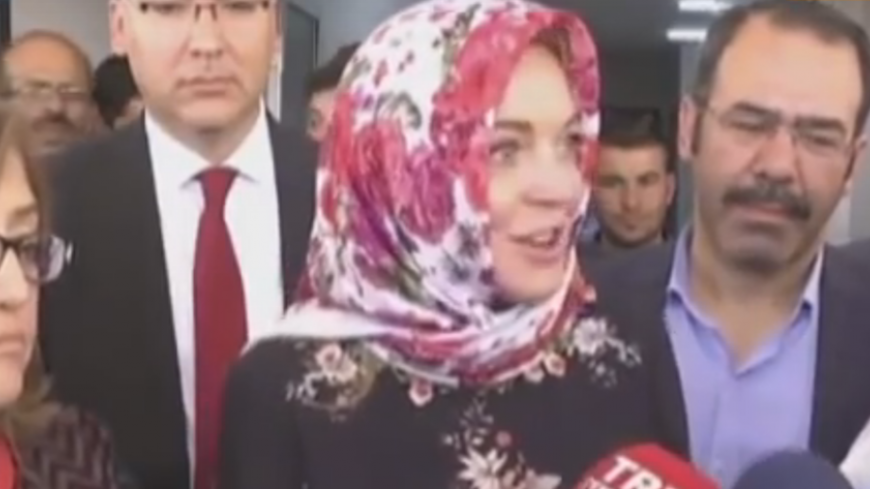 US-Turkish relations can be tepid at the best of times, but an unlikely ambassador may be rushing to the rescue: Lindsay Lohan.

Over the past week, images of the American actress, singer and model visiting Syrian refugee camps — cradling babies and sporting an Islamic-style headscarf — have been splashed across the pages of pro-government media outlets. Lohan's compatriot Angelina Jolie has visited the same refugee camps along the Syrian border several times, but she never elicited the gushing enthusiasm afforded Lohan.

Why the discrepancy? Because Lohan has waded into Turkish politics in a big way, spouting, among other things, one of President Recep Tayyip Erdogan’s worthier mantras: “The world is bigger than five.”

For Lohan's American fans who need help deciphering Erdogan's shorthand, it means the permanent membership of the UN Security Council should be expanded beyond its current five states, ostensibly to include Turkey. The fate of millions of people, Lohan solemnly observed in an interview with the pro-Erdogan ATV channel, should not be decided by five countries.

In another interview, with pro-government newspaper Haberturk, Lohan praised Erdogan for his handling of the July 15 coup attempt. The Turkish people truly respected him, she said. Lohan also gave Turkey’s tottering tourism industry a boost, asserting, “Turkey is a very safe and livable country.”

Nothing, however, will have won over more Turks than her tweeting “Terörü Lanetliyoruz,” which translates, “We curse terrorism.” Although Lohan didn't mention the Kurds in her political musings, her Turkish fans seized on her words as a condemnation of the Kurdistan Workers Party (PKK), which has dramatically escalated its attacks in recent months, killing hundreds of members of the security forces as well as civilians. The PKK’s recent victims also include officials from Erdogan’s Justice and Development Party.

Still, not everyone has been swayed by Lohan’s embrace of Turkey. Might the actress be motivated by her affections for a certain Turkish gentleman rather than Turkey itself, as Selim Sazak, a Turkish analyst, suggested? Another analyst, Cenk Sidar, suggested that Lohan was being paid by the Turkish government to “wear a turban and promote Turkey.” He tweeted, in an apparent reference to Lohan’s past escapades, “Alcohol, drug addiction, fantastic sponsor.”

Still, the mostly fawning coverage must have been something of a respite for American diplomats in Ankara, wearied by the daily grind of virulent anti-Americanism permeating the Turkish media that's apparently not going away anytime soon: The latest conspiracy theory making the rounds is that Washington is opposed to the presence of Turkish troops in Iraq and Syria because it wants to “secretly insert” PKK fighters, along with Shiite militias, in the battle to recapture Mosul from the Islamic State.

The Pentagon’s request for the White House to approve plans to arm the PKK’s Syrian franchise, the People’s Protection Units, did not help, nor did similar suggestions made by Democratic presidential candidate Hillary Clinton during her Oct. 9 debate with Republican rival Donald Trump. Erdogan made this clear during a televised speech at the presidential palace. “It is a very unfortunate statement,” Erdogan said. “To be honest I see it as politically inept.”