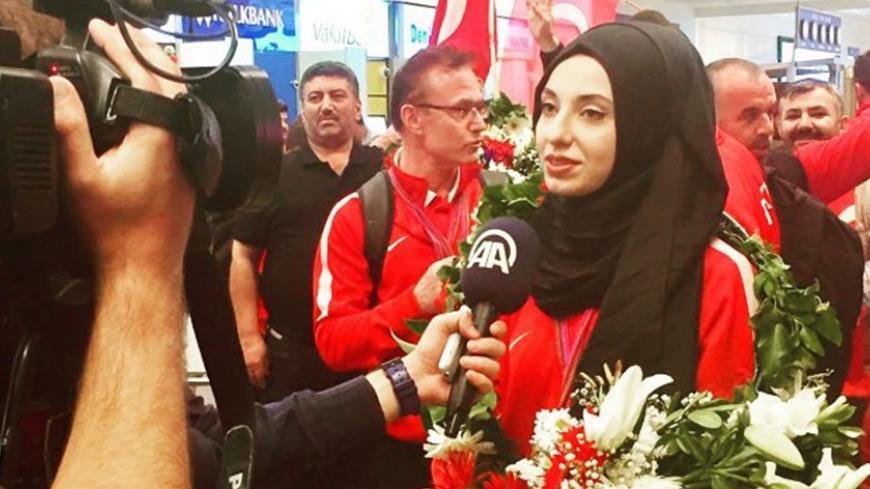 Turkish athletes achieved great success and won five gold, four silver and seven bronze medals at the 10th World Taekwondo Championships held in Lima, Peru, Sept. 29-Oct. 4. The Turkish media celebrated these accomplishments, but one of the champions, Kubra Dagli, made headlines more than all the others together. Dagli and Emirhan Muran each won a gold medal in the Poomsae team category, but Dagli’s headscarf instantly made her both a target of staunch criticism and a source of inspiration in Turkey.

Dagli received extensive media coverage for days, and the numerous interviews highlighted her joy for triumph. But at the same time, Dagli firmly responded to “disturbing” criticisms on social media, stating, “They don’t speak of my success, but of my headscarf. I don’t want this. Our success should be discussed. We made so much effort. We made our country and our team world champions. This is our joint pride.”

Turkey’s obsession with the headscarf is deeply rooted. As a part of the creation of a “modern” Turkish nation-state, headscarved women were the ones marginalized for not fitting the ideals prescribed by the secular nationalist project. As anthropologist Sertac Sehlikoglu explained, Turkish women were to be represented “as healthy, disciplined, civilized and liberated individuals.” Accordingly, women wearing the headscarf were associated with backwardness, so a secular person would have a hard time understanding headscarved women’s engagement in sports and fitness.

But this time, instead of secularists’ prejudice, the vitriol against Dagli came mainly from very conservative men — young and old — who attacked her on social media.

An angry Turk on Twitter attacked Dagli, writing, “Naked feet, covered head, hips and thighs out there, you are a commodity, what of it is proper?” Another admonished her: “Why is your head covered, as you already open your legs, enter every position, you can do it with your head uncovered too, this way be sure is more problematic, may Allah give you common sense.” Another conservative advised Dagli that she could have been a champion in reading the Quran instead.

In another interview, Dagli asserted herself against denunciations on social media, saying, “Insensible people do that … I don’t read it and I don’t even care … I realized my dream. I was waking up each morning thinking of becoming a world champion.”

Others offered Dagli support. "We are proud of you Kubra,” stated one user in Dagli’s defense. Another celebrated her precisely for “showing the strength of the headscarf to enemies of Islam.”

By wearing a headscarf and additionally being a world champion who confidently defends her right to practice the sport of her choice, Dagli is simultaneously challenging secularist biases, new Islamist ideals and overarching national machismo in Turkey. Referring to Dagli, Asu Maro from daily Milliyet criticized all-encompassing sexist ideologies, saying, "One is against covering women’s heads, another against her uncovering, but they unite at the same demand: ‘Stay at home.'”

In general, Dagli received accolades from the conservative, pro-government press. Columnist Mevlut Tezel wrote in daily Sabah, “We owe Kubra even bigger thanks, for proving that a headscarf is not a hindrance for becoming the best in the world. I believe that this success will be the source of inspiration for all other headscarved sisters who were reluctant in practicing sports.” Tabloid newspaper Takvim praised Dagli as “Golden Kubra." Similarly, conservative Yeni Akit also praised Dagli, but the comments in the section below the video of the Dagli-Muran duo that won the championship primarily addressed Dagli’s headscarf. One of the users defended Dagli by asking who, among those Muslims who criticize, is sinless, adding that those who can’t even take pride in success brought to Turkey are the main disgrace of the Islamic faith. Another affirmed pride in Dagli’s success, stating that when faith and resolution come together, success is inevitable. More cheering came from those who also stated hope that the president will offer more support to all athletes.

But many disproved of Kubra, most of them men. One social media user said hugging men is improper, an excessive mistake, a sin. Another objected, “Why would you put that headscarf girl, eh? … What is that display from the backside, what is that close embrace with men?” He cynically cried for mercy by adding, “This much is insult to Islam and female believers … Take that headscarf off your head!!! We support your championship, we congratulate you. But we condemn your insult to Muslims … How many are there who cover their head yet speak immorally and exhibit themselves and do everything that women without headscarf do.”

In an avalanche of opprobrium, another social media user stated, “This is exactly the type of Muslim that the freemasons want. Those who support this, who make this happen and believe in this, will certainly be punished by God Almighty.”

So continued the tit-for-tat between Dagli’s faultfinders and groupies, while she announced even bigger success in the future. But these kinds of attacks for being a Muslim sportswoman is not a new occurrence in Turkey or other Muslim majority countries. Though original teachings of Islam favor physical development for men and women, there are many fatwas on Islamic websites that regulate women’s involvement in sports. Usually, fatwas refer to gender segregation — which according to arguments could lead to seduction, temptation and corruption — and bodily exposure, including movements that are perceived as "sexually appealing," usually hips or breasts moving through running or jumping. In this regard, Sehlikoglu said, “The body of a Muslim sportswoman is troubling not only because it is sexually arousing as a female body, but also because it trespasses into the masculine zone.”

Even more broadly, regardless of her covered or uncovered head, being a sportswoman in Turkey and other Muslim majority countries is not easy. Besides the limitation of the various sports deemed appropriate for them, sportswomen in Turkey deal with prejudices of not being good mothers or wives, or bias that they inherently can’t understand sports. Moreover, the demands that men set for women’s modesty and frame as determinants of upholding “national values” are valid for all women. Citing that as one of his causes of discomfort, Ahmet Gulumseyen from Yeni Akit, the hard-core Islamist daily, scolded Western admiration and the national team’s clothing of Turkish sportswomen, notably of Muslim female wrestlers. He was also disturbed by wrestlers’ “halters," volleyball players in “skintight swimwear” and the miniskirts of young female tennis players. He also cited other sports with similar “scandal ugliness” related to the clothing of sportswomen.

Yet Turkish sportswomen have kept resisting different stereotypes and those who vilify their passion for sports. Many Turkish sportswomen have performed superbly on the international scene: Elif Aybuke Yilmaz and Olgun Kahveci in taekwondo, Rumeysa Memis in kickboxing, Ayse Begum Onbasi in gymnastics, and the women’s national basketball, volleyball, wrestling and weightlifting teams. Their resilience and outstanding attainment of their goals is a testimony that — despite patriarchal challenges — Turkey’s sportswomen are tough and here to stay, with or without headscarves.