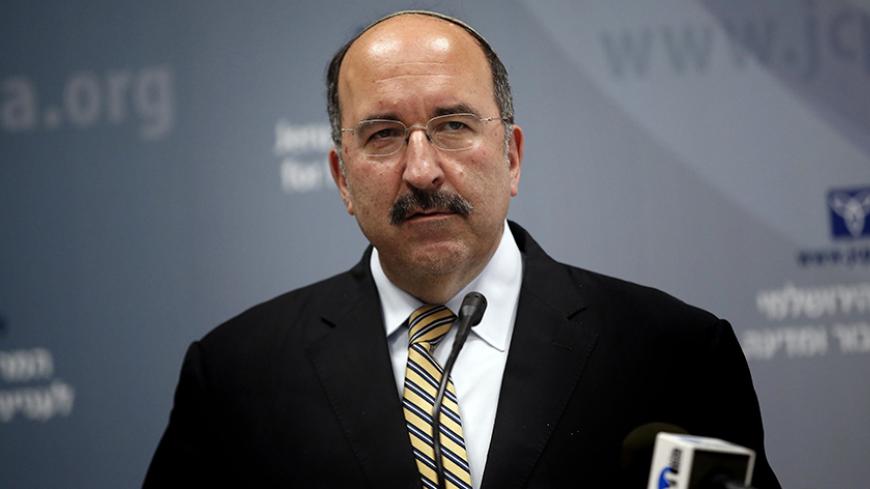 When Israeli Prime Minister Benjamin Netanyahu announced two months after the March 2015 elections that he was appointing his close associate Dore Gold as director general of the Foreign Ministry, political pundits surmised that Gold would become the government’s main liaison with the United States and the prime minister’s operational arm. Gold, known to have enjoyed Netanyahu’s trust since the mid-1990s, was expected to become the strong man at the Foreign Ministry, especially given Netanyahu’s decision to forgo appointing a foreign minister and to hold on to that portfolio himself despite the criticism this engendered.

Over the past 30 years, Gold had become one of the best-known Israelis in American diplomatic circles. The US-born Gold, Netanyahu’s adviser in 1996 during his first term as prime minister, was subsequently appointed by Netanyahu as Israel’s ambassador to the United Nations, where he served from 1997 to 1999. Now, contrary to all expectations, and a mere 18 months after that promising Foreign Ministry appointment, Gold announced Oct. 13 that he was stepping down.

The surprising resignation appears likely to further weaken the Foreign Ministry, which Netanyahu had already crippled in recent years. In fact, Netanyahu’s mistrust of the Foreign Ministry during his current term has deepened, and Gold was probably unable to provide him with the reassurance he sought that he could “control” the ministry’s officials. Gold cited personal reasons and a desire to spend more time with his family as the cause of his resignation, but according to diplomatic sources, that’s not the real reason. Apparently, Gold had been mulling the resignation for several months, after finding himself perpetually excluded from decision-making on issues of diplomacy.

The breaking point occurred during Netanyahu’s visit to New York for the UN General Assembly's annual gathering and for meetings with President Barack Obama and other top officials. Although Gold went to New York as well, he was not present at the Sept. 21 meeting with Obama, in which others from Netanyahu’s entourage took part. Gold’s absence reflected the status to which the Foreign Ministry had been relegated since his appointment to lead it, in complete contradiction to his expectations and the promises Netanyahu had made that he would be a pivotal figure in Israeli diplomacy.

According to diplomatic sources, Gold found himself repeatedly excluded from a long list of diplomatic moves, with Netanyahu preferring the assistance of his close associate Yitzhak Molcho, an attorney without an official position. Molcho became Netanyahu’s envoy on diplomacy-related issues with the United States and with states in the region, especially Egypt. The contacts that resulted in the reconciliation agreement with Turkey were conducted by Joseph Ciechanover, who served as Foreign Ministry director general way back in the 1980s. In addition, the ministry’s budget was cut, and its authority further eroded. In addition, Netanyahu handed over some foreign ministerial duties to Minister Tzachi Hanegbi and Deputy Minister Michael Oren, a former Israeli ambassador to the United States. Even Culture and Sports Minister Miri Regev was given a chunk of the duties previously held by the Foreign Ministry’s department for scientific and foreign liaison.

Gold’s resignation is of far greater significance than the waves already rocking the Foreign Ministry. It reflects troubling developments in the prime minister’s office, which has become an isolated fortress held by one man: Netanyahu. It seems increasingly as if he believes he can do everything on his own, amid growing distrust of those around him.

It was just this past August that Netanyahu changed his mind about appointing one of his loyalists, David Sharan, to the post of Cabinet secretary. Sharan, a veteran Likud figure, had joined Netanyahu’s office in 2014 as chief of staff. He enjoyed the confidence of Netanyahu, who decided to promote him to Cabinet secretary, as well as Netanyahu's wife, Sara. Sharan’s happiness was to be short-lived, however. In a humiliating reversal several weeks after the appointment, Netanyahu’s office announced that Sharan would not be named Cabinet secretary after all. To those in the know, it was clear that something dramatic was afoot.

The mysterious reason for denying Sharan the coveted appointment was probably a birthday party held by his wife at the home of a Likud activist and to which everybody who’s anybody in the Likud was invited. According to political sources, Sara Netanyahu warned her husband about the Sharans' political power, which could potentially be troubling and damaging. As this rendition of events has it, this inevitably led to Sharan’s downfall. A senior political source speaking on condition of anonymity said that Sharan tried to talk Netanyahu out of his decision and to warn him that he “would remain alone, without a single ally in the office.” Netanyahu dismissed Sharan’s assertion, however, and told his associate something to the effect of “I’m at my best when I’m on my own.”

On Oct. 14, Haaretz ran a story reporting that neither Gold nor anyone else from the Foreign Ministry had been invited to a preparatory meeting for Netanyahu’s September UN visit, but defense officials were present. When asked why, Netanyahu responded, “You don't need the Foreign Ministry people. I’m here.”

A senior diplomatic source told Al-Monitor on condition of anonymity, “The fact that someone like Gold, who has displayed infinite loyalty toward Netanyahu for over a quarter of a century, finds himself excluded and marked as one unable ‘to control’ the Foreign Ministry’s officials whom Netanyahu distrusts signals that we have a problem. The prime minister cannot conduct himself in an atmosphere of constant suspicion.” The same source claimed that Netanyahu, long known as prone to suspicion and somewhat paranoid, was handling himself like a man who does not believe anyone and only trusts himself. Over the past few years, this has resulted in a gutted prime minister’s office, abandoned by most of Netanyahu’s loyalists of recent years.

Since the elections that netted the Likud 30 seats in parliament, attributed to the brilliant campaign Netanyahu conducted alone, Netanyahu has not stopped claiming that the victory was his, and all the Likud Knesset members and government ministers owe him their jobs. With this state of mind, the prime minister has almost stopped consulting his ministers, except for Tourism Minister Yariv Levin, whom he trusts (for now). Everyone else is regarded as subversive elements seeking his downfall.