Will Cairo reverse decision to transfer islands to Riyadh?

As the Egyptian government defends in court its maritime border agreement with Saudi Arabia that transferred two Red Sea islands to Riyadh, a lawyer for the state provoked controversy after admitting the "islands are still Egyptian." 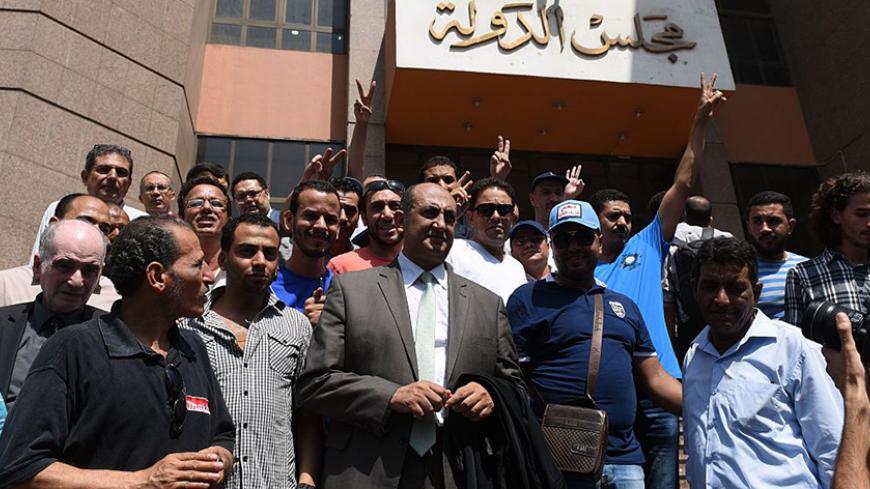 Egyptian lawyer and leftist opposition figure Khaled Ali (C) stands among people outside the building of the State Council, Egypt's highest administrative court, in Cairo on June 26, 2016, after the court postponed a hearing of the government's appeal against the decision to block the controversial handover of two Red Sea islands to Saudi Arabia. - MOHAMED EL-SHAHED/AFP/Getty Images

“Tiran and Sanafir islands are still Egyptian, and the Egyptian flag still flies above them.” This surprising statement was made by the Egyptian government’s lawyer during an Oct. 18 court session in which Cairo was appealing the June 21 verdict of Egypt’s administrative court that annulled the maritime borders agreement signed between Cairo and Riyadh earlier this year. The latter agreement, which led to widespread public outrage, effectively transferred ownership of the two Red Sea islands to Saudi Arabia.

The statement of the government’s lawyer, whereby he recognized that the islands are Egyptian territories, has sparked widespread criticism within Egypt’s political and judicial circles in the past few days. This coincided with the ongoing disagreements between Cairo and Riyadh about the intervention in the Syrian war and the decision of Saudi Aramco to stop oil supplies to Egypt in October, which threatens harmony and coordination in relations between the two countries.

An official in the Council of Ministers told Al-Monitor, “The government represented by the prime minister signed the maritime borders agreement, whereby the islands of Tiran and Sanafir would be transferred to Saudi Arabia. The government’s decision was based on the deliberations of a specialized committee that studied the issue at the political, topographical, engineering and historical levels.”

The official, who spoke on condition of anonymity, went on, “The government, however, is bound to commit to the judiciary’s decision should the appeal against the ownership of the two islands be overruled. Parliament has to consider another matter and has yet to vote on the agreement. All these procedures would delay the transfer of the islands, and therefore they remain thus far under Egypt’s sovereignty.”

Sherif described the lawyer’s statement as “a slip of the tongue,” noting that “it does not mean — legally speaking — that Tiran and Sanafir islands belong to Egypt. It is true that the Egyptian flag is still flying over these territories, but this means that they remain under Egypt’s administration rather than sovereignty.”

He said, “The government continues to challenge the administrative court’s decision to annul the maritime borders agreement and the transfer of the islands. It will carry out all the necessary proceedings before all judiciary platforms in Egypt, all the way to the Supreme Constitutional Court.”

The lawsuit was filed by lawyer Khaled Ali, who said in an Oct. 18 Facebook post commenting on the session’s events, “I said in my pleading: ‘Does the government believe that raising the Egyptian flag over Tiran is such a problem that it requires filing an appeal to suspend the verdict [annulling the transfer]?’ And the government’s lawyer replied that Egyptian flag is still flying over Tiran and that it is Egyptian territory.’”

Following the court’s Oct. 18 session, Ali told Al-Monitor via phone, “The statement of the government’s lawyer shows that he is merely doing his job, [and defending the case] is against his convictions.” He stressed that “the writ procedures submitted to demand the government implement the verdict to annul the agreement are still ongoing.”

The Egyptian government is facing a legal and political dilemma because of the maritime borders agreement. Of note, in addition to the tense relations between Cairo and Riyadh, the islands of Tiran and Sanafir are still a leverage card in the hands of Egyptian officials for more gains from Saudi Arabia until they are able to completely transfer ownership. However, the government fears a great revolution should the administrative court, which is being granted wide powers in terms of sovereignty issues, rule in favor of the appeal.

Mohammed Basal, a journalist and expert on judicial affairs, told Al-Monitor, “The government has many concerns about the judiciary looking into the case of the two islands. It fears that the judiciary and the administrative court would control issues related to sovereignty. The government also dreads the Saudi reaction should the agreement be annulled, and where the entire political administration would stand in domestic public opinion.”

He added, “The government’s decision to carry on with the appeal has one main goal, which is to reduce the judiciary's influence over state sovereignty issues.”

Of note, the government has yet to submit the agreement to parliament for consideration, despite the fact that Article 151 of the Egyptian Constitution provides for the approval of parliament on agreements and treaties related to the rights of sovereignty and does not allow any waiver of any part of the state’s territories.

Makram Mohammed Ahmed, a journalist close to Egyptian political authorities, told Al-Monitor, “The government cannot transfer the islands to Saudi Arabia before completing all necessary legal and constitutional procedures and before parliament’s approval, not to mention the need to coordinate with Israel, which is in charge of the security tasks that were entrusted to Egypt.”

Ahmed criticized “Saudi Arabia’s pressure on Egypt by cutting off oil supplies, despite the government’s courage in giving away the two islands in the face of strong opposition to this agreement from the Egyptian public.”

The maritime borders agreement and its intricacies are likely to cause already tense relations between Cairo and Riyadh to take a bad turn, despite the apparent warm welcome by Egyptian officials of the Saudi monarch upon his visit to Cairo in early April.