Russia and Turkey are effusive about the positive gains in their relationship, but ties remain tenuous where Syria is concerned. 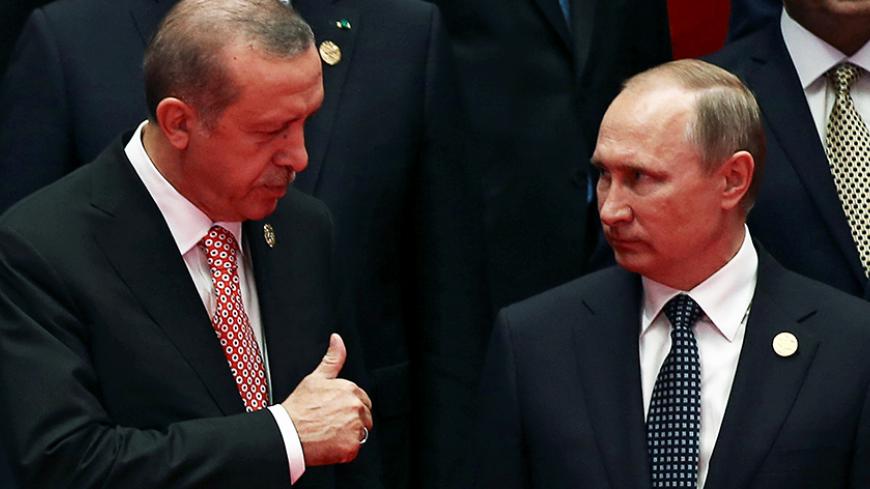 Only a year or so ago, Russian and Turkish newspapers were digging up reports of the last war between the countries and speculating what would happen if a new one broke out. But things are moving fast. The military channel of the dialogue that began with President Recep Tayyip Erdogan’s apology letter to Russian President Vladimir Putin was extended with the Sept. 15 visit of Russian Chief of Staff Valery Gerasimov to Ankara.

A visit by the chief of staff after an 11-year hiatus is itself an important development, made even more so because it came soon after Turkey’s intervention in the Syrian war and coincides with the ongoing debate over Black Sea domination. At the end, the official statements of both sides were sweeter than honey.

The Russian Defense Ministry was positive in its statement: “The meeting provided an opportunity to facilitate assessments of the current situation in Syria and measures needed to support the cease-fire.”

The Turkish side also appeared to be very pleased with the visit. Turkish military sources said, “This visit realized after an 11-year interval was very positive and productive. Commonalities between the militaries of Turkey and the Russian Federation were further consolidated and opened the way to even more positive developments. This visit … is a signal of the Russian Federation’s acknowledgement of Turkey as a major power in the region. … We believe there will be positive reflections of this in the near future. Another important aspect of the visit is the understanding that regional problems can be solved through joint initiatives of regional countries.”

This is certainly a groundbreaking reversal for Ankara, which once used to ask, “What is Russia doing in Syria?”

Although Ankara has been working with the United States in a proxy war against the Syrian regime for the past five years, Turkey couldn’t have entered Jarablus and al-Rai without Russia’s blessing. It is certainly noteworthy that Turkey’s presidential spokesman, Ibrahim Kalin, admitted earlier this month that he views the improvement in Russian-Turkish relations regarding Syria as a positive step. “It was a good thing that we took that step," he said. "Otherwise, we could not have conducted these operations in Syria and sent assistance there."

Nevertheless, despite all this optimism, it is not all that simple. Russians think that Turkey, after entering Syria with a green light from Moscow, has exceeded the agreed-upon limits of the operation. The Syria issue has aspects that could bring the two countries into confrontation at any moment. Russian agency Interfax reported that Gerasimov told Turkish Chief of General Staff Hulusi Akar that the Turkish army’s operations in Syria have violated international law. The report said Gerasimov warned that further expansion of the operation could have political and military risks.

It is significant that the Russian warning came on the heels of US President Barack Obama’s proposal to Erdogan of a joint operation against Raqqa.

According to Turkish sources, Gerasimov wanted to know Turkey's operational dimensions and when Turkey will conclude its operation. Akar told him that Turkey favors territorial integrity for Syria and that Operation Euphrates Shield aimed at ensuring Turkey's border security. Turkish media reported the three-hour meeting of the two generals as confirming the legitimacy and appropriateness of Operation Euphrates Shield.

One has to wonder how accurate the Turkish media’s conclusions were. Russia declares all operations carried out by third-party countries without the knowledge and approval of the Syrian government as violations of international law. It is not likely that Moscow will amend its firm stance for the benefit of Turkish-Russian relations. It is hardly likely that Moscow will simply stand and watch if Turkey supports armed groups against the Syrian army, which is gaining ground around Aleppo with Russia's backing.

Turkey and Russia had already decided to establish a hotline as relations were normalizing. The meeting in Ankara between two military chiefs simply activated the plan.

The step that would have significant bearing on Turkey-Russia rapprochement will be more than a hotline and will require Ankara to change its attitude toward Syrian opposition groups. But there is no sign of this. There is an undeclared accord between the United States and Russia to treat Erdogan’s favored Jabhat Fatah al-Sham (the former Jabhat al-Nusra) the same as the Islamic State. The question is how Turkey and the Gulf countries are assessing this US-Russian accord. Although Russian Foreign Minister Sergey Lavrov said Turkey has ceased issuing ultimatums on the destiny of Syrian President Bashar al-Assad, can anyone say that Ankara’s intentions for Syria have become crystal clear?

In addition to Syria, another critical issue is Russia’s sensitivity to an increasing NATO presence in the Black Sea. Ankara annoyed Moscow to no end by favoring such a buildup in the Black Sea. Until now, Russia has deemed Turkey’s handling of the navigation — as foreseen by the Montreux Straits Treaty — through its straits as friendly.

According to a statement Gerasimov gave before coming to Ankara, Russia will not tolerate a change in this Turkish approach. “Today our Black Sea fleet is in good shape. Only a couple of years ago the military capacity of this fleet contrasted sharply with the Turkish navy. In those days, Turkey was seen as the ruler of the Black Sea. These have all changed,” he said.

The Russian general noted that submarines armed with guided missiles have joined Russia's Black Sea fleet. “We now have three," he said. "One more is about to join them. Two more will be added next year to give us a total of six submarines.”

Turkey and Russia, which have both increased their military capabilities and have become more involved in regional issues, are in disagreement. To prevent these discords from becoming hot clashes, more hotlines and more channels of dialogue are needed. Both countries want to improve economic relations, but Russia pays more attention than Turkey to strategic relations. Al-Monitor has learned that Leonid Reshetnikov, the chairman of the Kremlin think-tank Russian Institute for Strategic Studies, while hosting Ankara policymakers in Moscow had stated, “We want to improve ties with Turkey very quickly. Although Turkey looks at the issue from its economic aspects, we look at the world through a geopolitical lens.” The institute will send a delegation to Turkey Oct. 31 seeking to further improve relations between the two countries.

Not to be forgotten is that both countries have imperial habits and they may well need more than a single hotline to avoid a head-on confrontation while dealing with their ambitions.