Will the failed coup in Turkey ultimately help redeem students who were discharged from military schools in the past decade as alleged punishment for refusing to fall in with the Fethullah Gulen Terrorist Organization? 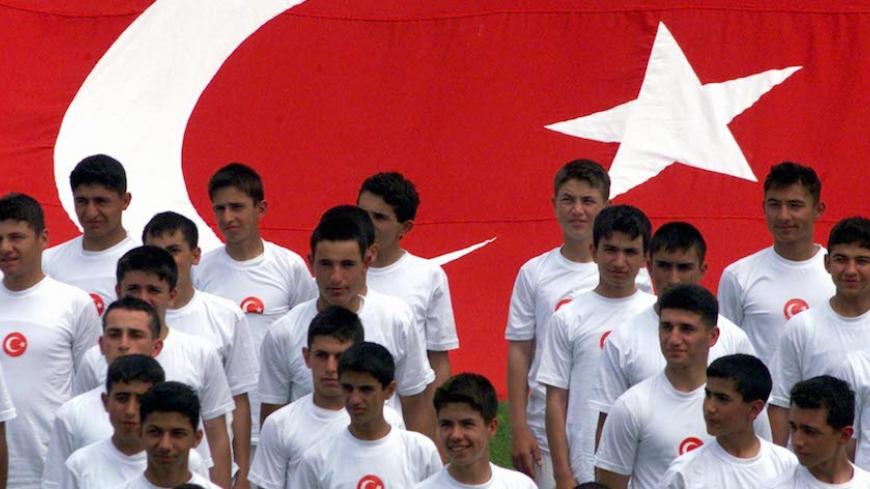 Students of Turkish military high school of Kuleli stand before a Turkish flag during their performance in Inonu Stadium, to celebrate Youth and Sports Day, May 19, 2001.

Since the failed coup last month, drastic changes in Turkey have become mundane. But at least 4,000 students are expected to be affected by a July 31 emergency decree to close all military high schools and military academies. The four military high schools were highly competitive to enter and graduate from. Most of them were established during the Ottoman era, representing a 200-year-old legacy.

The schools are being closed because the government believes that they have been infiltrated by the so-called Fethullah Gulen Terror Organization (FETO) and that about 95% of the student body identifies with FETO. The ruling Justice and Development Party (AKP) government is convinced these schools cannot be rehabilitated.

Indeed, there has been news about stolen entry exam questions not only for military schools but also for several government institutions at a systemic level for a decade or so. More victims of FETO have been coming out every day in Turkey since the July 15 coup failed.

One of the youngest group of victims are those who were coerced to leave military schools after suffering years of bullying and discrimination at the hands of FETO-member superiors. Since 2006, these students have organized themselves under the banner "Platform of Dismissed and Discharged Students from the Turkish Armed Forces (TSK)." They have been struggling to raise awareness of “mobbing,” or bullying by crowds, and they demand that their reputations be restored. In addition, as they were discharged or dismissed from state-owned military schools, these students were required to pay heavy fines of 10,000 to 70,000 Turkish liras (roughly $3,000 to $23,000), depending on how many years of schooling they received.

In a 2011 interview with the daily Radikal, platform member Tugrul Yildirim said, “I entered military high school at the age of 14 with the desire to serve my country. Then I was dismissed arbitrarily. Now I see the person [who dismissed me] is in custody due to the Ergenekon case.” Most victims at the time were not sure how this systematic discrimination was being organized, and most of these cadets and their families concluded the real goal was to eventually shut down the military high schools. In an odd way, it seems FETO accomplished at least one of its goals.

Al-Monitor spoke with six of these former cadets and compiled their accounts from various news outlets. The main alleged reasons why the students were discharged after months of bullying are threefold: discipline problems, academic failure and health reasons.

Batuhan Ayirtman, a 2009 graduate of military high school, was dismissed from the Air Force Academy in 2010. Ayirtman told Al-Monitor, “It all started with emotional and physical hardships. You are doomed to lose, whatever you do. For example, although I would have a fine haircut, my superior would send me off to the barber claiming my hair was not up to code. I would receive a disciplinary penalty for this. Then when I ran off to the barber, the officer there would write me up for missing class, telling me I did not need a haircut.”

Ayirtman's story was similar to those of all the dismissed cadets Al-Monitor interviewed: A select group of cadets exclusively were subjected to hard punishment. He said, “I suffered from several arbitrary requests from my superiors. Along with cruel physical demands, there were also repetitive verbal abuses.” All of these acts of bullying were carried out so Ayirtman would quit on his own. Indeed, hundreds of cadets caved in and agreed to quit. When Ayirtman proved resilient, the military doctors declared him unfit to continue his education, he said.

Onur Berber, a 2010 graduate of military high school, was dismissed from the Army Military Academy in 2012. Berber then finished college in two years and is now an engineer. He told Al-Monitor that during his time in the academy he had also been bullied and suffered cruel punishment for arbitrary disciplinary charges. He was finally told he could not finish his first year due to his academic standing.

Several of the former cadets complained that cheating on exams was common and encouraged among students believed to be associated with FETO. Students who agreed to join FETO were given the questions and answers prior to exams. To top this off, bullied students’ multiple-choice exam results were altered, the cadets said. To prevent this, victims decided to use pens rather than pencils. But using pens disqualified them since it was against the school code, which meant not only failing the exams, but also receiving disciplinary punishment. These students also were commonly accused of smoking, drinking alcohol, being gay or having pornographic material at school, the former cadets told Al-Monitor.

In April 2012, the Turkish parliament even agreed to investigate some students' allegations about unresolved cases of mysterious deaths.

Several of the students Al-Monitor interviewed have managed to rebuild their lives and attend fine colleges, yet their sustained financial and emotional losses are still visible.

Now with the failed coup, most of the former cadets seem confident their voices will be heard. Although most of them are now too old to go back to military school, younger ones still yearn for their right to return. They all demand a formal apology because they have suffered years of ridicule for being discharged from the armed forces. It is also crucial for them to have the financial obligations waived.

Emotional and physical bullying was not confined to military students; it also affected young conscripts and even officers who failed to agree with FETO. A 29-year-old female air force officer, Nazligul Dastanoglu, committed suicide in 2012, a day after she was discharged for alleged promiscuous behavior despite a lack of evidence or due process. Her family tried to seek justice for the psychological torment she suffered, but had no success during the past four years. On July 28, her mother told the press that the men who unfairly discharged her daughter are among the coup plotters and are FETO members.

Rumors that senior officers bullied young and uneducated conscripts are spreading in Ankara. One doctor who retired from the military in 2015 told Al-Monitor, “I observed it several times, where conscripts were brought to us almost in a state of shock, unable to speak or move. Most of the time, this kind of shock can be seen in people who are not prepared for combat. But these conscripts had not been at the front. When we asked, we almost always heard they were scared during training. But this is beyond being scared; most of these conscripts had been literally tortured by their superiors who were there to train and guide them.”

There are allegations that FETO members worked in teams to intimidate the young conscripts into joining their ranks. A senior law enforcement officer told Al-Monitor, “As more victims and their families speak out, we can find more members of FETO in the military and bring them to justice.”

The youngest victims of FETO are the ones discharged from what used to be respected institutions in Turkey. For a decade, these dismissed cadets and their families have suffered financially and emotionally. The failed coup could be a turning point for them to finally find justice and some sort of closure.